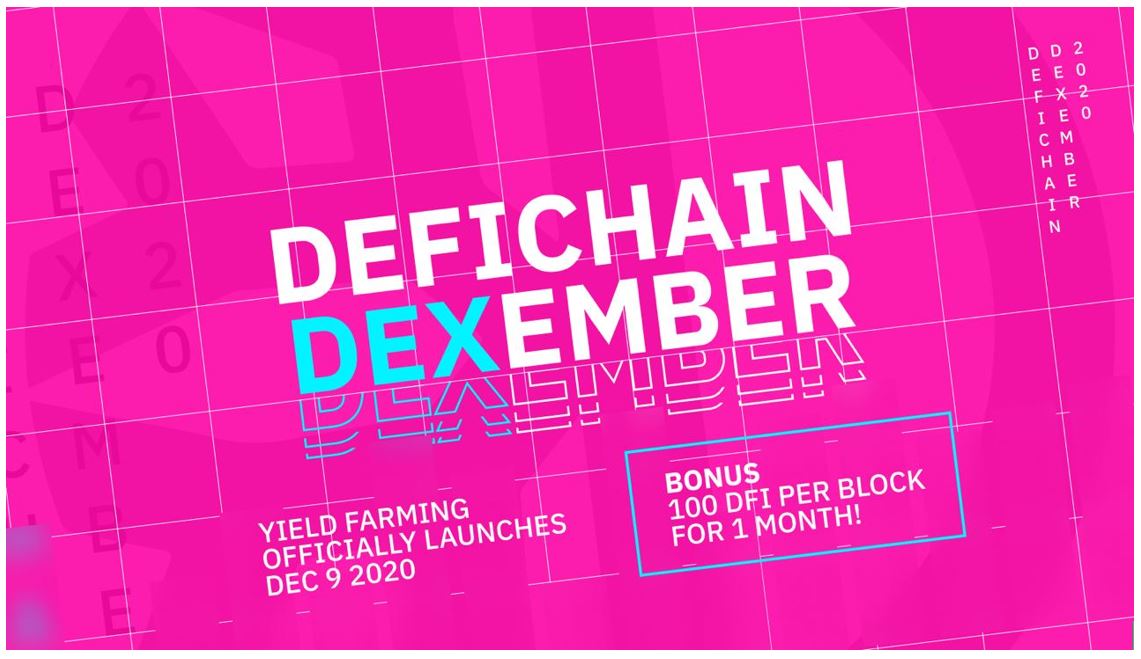 As a promotion to introduce the yield farming launch, DeFiChain has also launched the DEXember campaign – providing a full month of bonus liquidity mining rewards at 100 DFI / block. Yields for liquidity providers are expected to exceed 400% APY during this period.

The mining rewards will settle at 45 DFI / block after the promotion.

As a second bonus of the campaign, the native DeFiChain coin, DFI, can also be traded at 0% maker and taker fees, at tier one exchange Bittrex Global until 31 Dec 2020. Thus allowing users to engage in arbitrage opportunities with higher profits.

The announcement comes just a week after its launch of the DeFiChain DEX, bringing on a truly decentralized exchange that is non-custodial and without need for KYC. Within a week of its launch, DeFiChain DEX has managed to capture over $3M USD in total value locked (TVL), quickly placing it among the top forty of liquidity pools in the DeFi space.

“Our team have been working on overdrive for weeks, pushing out yet another use case for the DeFiChain project, and right on schedule. Liquidity mining has been a major milestone on our roadmap, and we are absolutely excited to share it with the community,” said Dr. Julian Hosp, DeFiChain Foundation’s Chairman. “We believe the DEXember campaign will create a lot of interest, and help us win new users from the DeFi community.”

The DeFi space has been growing immensely in terms of value, functionalities, and attention from both the media and public. It is DeFiChain’s mission to bring seamless and unrestricted access to a wide range of financial services in a purely decentralized system.

“On Ethereum, transactions are done as machine instructions, moving bits and bytes; on DeFiChain, DeFi transactions are actual native consensus transactions, validated by all nodes and miners. In this sense, ETH is the CPU, and DeFiChain is the ASIC of DeFi.”

Users can participate in the promotion by purchasing DFI on Bittrex Global exchange without trading fees, and transferring the coins to the DeFiChain DEX. Within the DEX, they are able to swap DFI with BTC, ETH, and USDT, and easily participate in the liquidity pools to mine the high yields provided by the DEXember promotion.

A unique feature of DeFiChain DEX – no gas fees are required to claim farming rewards as they are automatically credited to the user after every block. This allows the full spectrum of users – not just the wealthy – to participate in earning rewards without sacrificing their profits for gas fees.

To participate in the DEXember promotion and generate high yields, download the DeFiChain desktop wallet app.

The DeFiChain project’s mission is to bring DeFi to the bitcoin ecosystem.

Unlike most of the other DeFi projects that are built on the Ethereum network, DeFiChain is built as a software fork on bitcoin, and leverages Bitcoin’s security by anchoring to the bitcoin blockchain (via Merkle root) every few minutes.

By dedicating the functionality of a blockchain specifically to decentralized finance, DeFiChain is able to provide high transaction throughput, reduced risk of errors, and intelligent feature development.

For full information including roadmap and upcoming features, visit https://defichain.com/