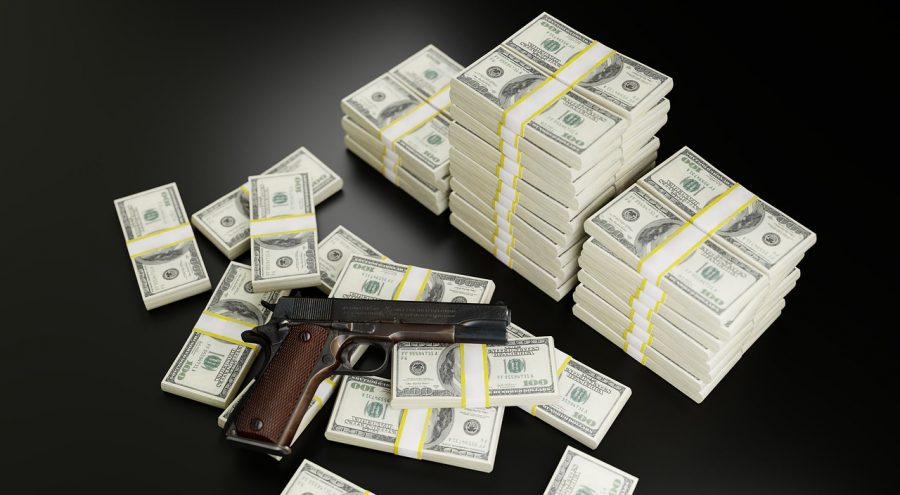 The shootings in Dayton, Ohio and El Paso, Texas are still fresh in the memory of Americans. Like every previous shooting, these raised urgent questions about gun laws in the United States of America. However, while several political and social groups went on to attack the National Rifle Association and the pro-gun lobby, one group jumped to its defense and by extension, the defense of the Second Amendment and gun ownership rights: Cryptocurrency advocates.

The commonality between prominent cryptocurrency advocates and the gun lobby was recently brought to light after the host of the ‘WhatBitcoinDid’ podcast, Peter McCormack, highlighted his lack of surprise at the lax gun laws in the United States. Reactions were swift and fierce, with many going on to call the podcaster ‘statist.‘

What is it about gun ownership and the Second Amendment that has many cryptocurrency advocates jumping to its defense? For many, “the right of the people to keep and bear arms” is sacrosanct, and the individual’s main defense against what could be a “tyrannical government.” The Second Amendment guarantees citizens’ right to self-defense, many claim. The right to hold and trade in cryptocurrencies, many argue, is an extension of this right to individual liberty.

Rob McNealy, Co-founder of the TUSC Network and prominent crypto and gun advocate, recently spoke to AMBCrypto and answered the question of, “Why guns?” He said,

“People that are armed, that can protect themselves, that are more self-reliant, can say no, they can say no to authority. They don’t appreciate and respect unlawful governments or tyrannical governments or criminals. The ability to be independent and protect yourself is viewed as not only a human right and an international right, but an American tradition.”

When asked about the commonalities gun groups and crypto-advocates share, McNealy said,

“Being independent and decentralized are American concepts. And so from the standpoint of the gun people, cryptocurrency, once it’s explained to them, where it’s an empowering of self, personal empowering thing… they liken it to if a gun empowers you to personally defend yourself. Cryptocurrencies in a decentralized way also can empower you with your own finances.”

There is another shared characteristic both groups share; vilification in the eyes of the media and the public. With every mass shooting, the gun industry is at the mercy of a crescendo of criticism. With every major scam or ‘scientific report,’ the cryptocurrency industry becomes a target of mainstream media and financial know-it-alls. Despite the fact that institutional entry is diluting the perception around cryptos, a general lack of understanding continues to hamper its image.

However, the characteristic similarity between the two industries may also give way to a more symbiotic and productive relationship. A relationship that could prove especially beneficial for the gun industry.

The cryptocurrency industry is no stranger to banks and mainstream financial institutions giving it a cold shoulder. It now seems that the gun industry is slowly joining the ranks too. After a series of terrible mass shootings in the United States, there have been calls for change; not only from lawmakers, but institutions as well. Banks, it would seem, are leading this call for change.

Following the Parkland shootings in 2018, several mainstream financial institutions have taken steps to curb the purchase of firearms and ammunition using its services. Citigroup was the first to take the initiative, with the banking giant refusing to cater to clients who sold guns to anyone who did not pass a background check. It also barred the sale of bump stocks and guns to anyone under the age of 21.

Bank of America and BlackRock funds followed suit, with the former announcing that it would not lend to manufacturers of ‘assault-style’ weapons, while the latter began offering a new investment fund which excluded firearm manufacturers and dealers. Facebook, YouTube, Reddit, Amazon Web Services and Shopify aren’t lagging behind either.

However, these institutions haven’t been convincing in their explanations for these actions. While Citigroup’s Michael Corbat deflected the question of the Second Amendment by stating that the step was a “good practice,” Bank of America was put in a tough spot since it was one of the major financiers of Remington Outdoor, a manufacturer of assault rifles.

In fact, the purchase of firearms and ammunition is getting so restrictive that many in the gun industry see banks and “corporate gun control,” and not the government, as the biggest threat to the Second Amendment. In the words of Michael Hammond, legal counsel for Gun Owners of America,

“If you can’t make guns, if you can’t sell guns, the Second Amendment doesn’t mean much.”

Crypto to the rescue?

Since there is a significant convergence between cryptocurrency advocates and pro-gun proponents, a lot of firearm dealers and manufacturers in the USA have already begun accepting cryptocurrencies as a mode of payment. According to SpendBitcoins, over three dozen dealerships and retailers already accept cryptocurrencies. Notable among them are two; Central Texas Gun Works and Defense Distributed.

The latter, led by Cody Wilson, is generating millions in annual revenue from the sale of 3-D printed firearms, with Wilson claiming that 10% of the firm’s revenue came from Bitcoin. The former, a very popular firearms dealerships in the United States, has also generated millions in revenue, with owner Michael Cargill stating in 2017 that over 45% of Central Texas Gun Works’ revenue came from cryptocurrencies.

Here, it should be noted that the purchase of guns using cryptocurrencies still accounts for a small part of all sales. However, this is a proportion that is bound to grow with each quarter. According to Daniel Frechtling of G2 Web Services, sales grew by 188% and 108% respectively, in the aftermath of the Las Vegas and Parkland shootings, a growth attributed to gun owners anticipating a regulatory clampdown.

There’s no telling when this series of mass shootings will stop. The bipartisan United States Congress is unlikely to agree on fertilizer subsidies, let alone gun control measures. The Trump administration, in light of its coziness to the NRA, is unlikely to take any step even remotely close to the Obama administration’s Operation Choke Point either.

What then? Well, many expect “corporate gun control” to rear its head again, with many more banks and financial institutions closing their doors to those who deal or purchase firearms using their services. What then? Well, cryptocurrencies may just be the solution.

Cryptocurrencies will allow gun owners to simply circumvent traditional systems of finance. This is an observation that has been noted by many, including the TUSC Network’s Rob McNealy, who spoke to AMBCrypto and claimed that TUSC has been marketed as a new technology, specifically to gun owners, well aware of the void mainstream institutions are leaving for them in the financial space.

He isn’t alone. According to Evercompliant’s Danny Klein,

“It seems like the firearms industry faces growing scrutiny and potentially becoming a prohibited good for credit card processing. However, that squeeze in supply is not likely to affect the demand, and so, firearms will find their way to the market.”

All being said, there is a long way to go before cryptocurrencies if and do become a mainstay of the gun industry. In fact, the outlook may not be as difficult for the gun industry as it seems to be as some other financial institutions, including Visa, have noted that it’s not the bank’s job to determine right and wrong. As long as gun purchases are legal under Federal Law, Visa will continue to facilitate those, CEO Alfred Kelly claimed.

Further, cryptocurrency today may not be the pariah it once was as several mainstream institutions are openly embracing it and its underlying technology, blockchain.