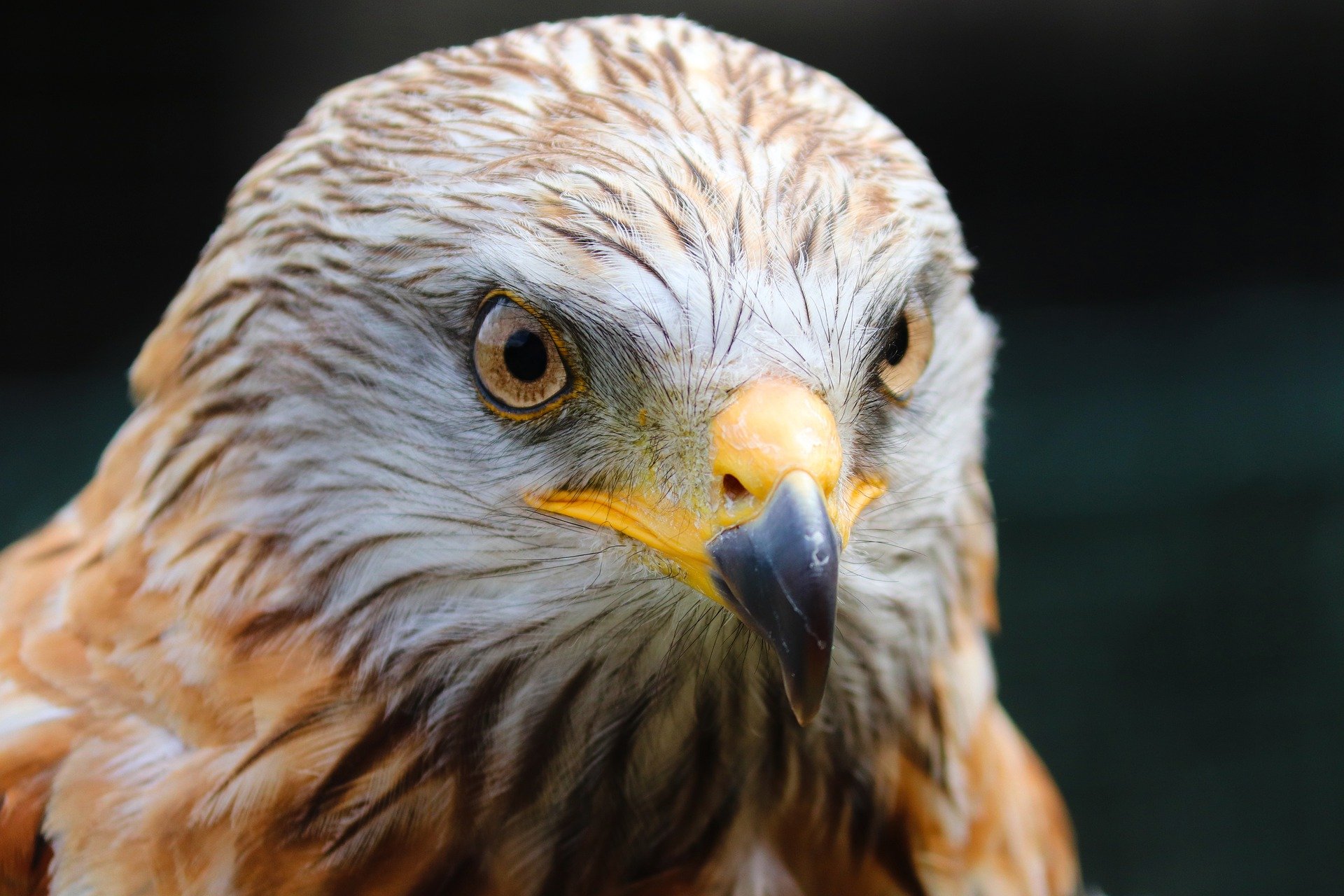 After three weeks of a bearish market, a few digital assets had witnessed noticeable uptrends towards the end of the third quarter of 2020. Maker, claiming its place consistently in the green zone, witnessed a price surge of almost 20 % in the last one week.

The digital asset was recently in the news, as it regained its position as the top asset holding DAPP with close to $2 billion of Ethereum based assets in DAI.

While for others, the fundamentals remain highly strong, but the sluggish price recovery, in the case of BitTorrent and Crpto.com Coin they have kept investors mostly on edge. 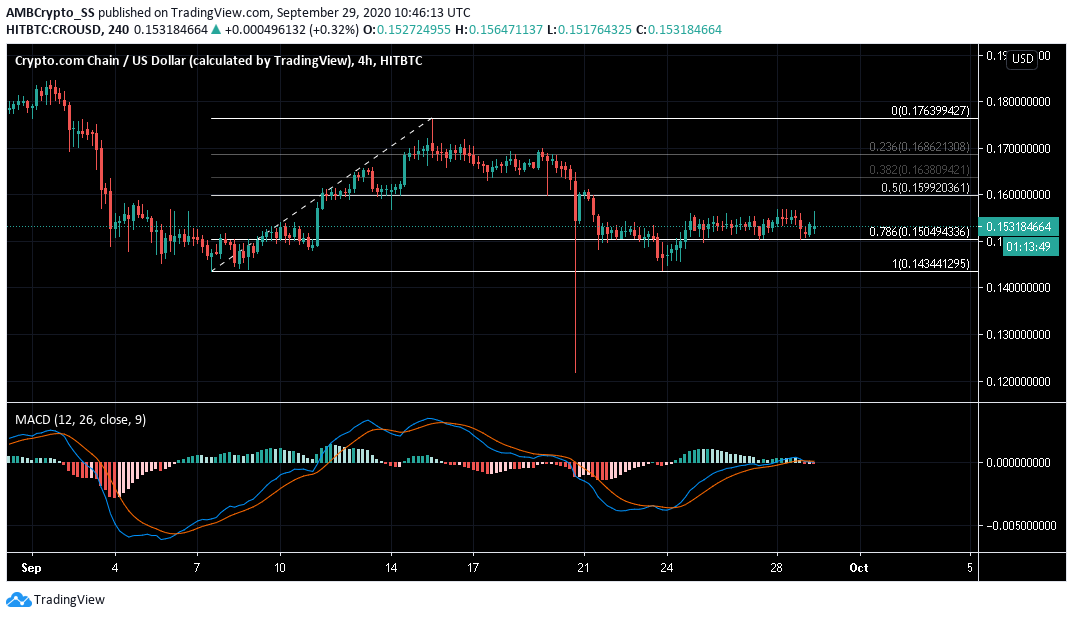 Crypto.com Coin was at the time of writing, trading near the 78.6% retracement level highlighted by the Fibonacci Retracement tool. This level also coincided with the support level of $ 0.149.

Also, after a brief encounter with the bulls, the MACD appeared to be heading towards the neutral zone and could also display some bearishness in the coming days, with the possibility of the MACD line diving below the signal line.

Given these signals, Crypto.com Coin may only start retracing some gains, after claiming the 78.6% level. A slump back to the $0.149 level of support can help the digital asset to establish a base, before witnessing another rally.

In other news, the crypto payment platform was recently under maintenance. It had paused its deposits, withdrawals, and trading on its exchange, as users faced some issues. CEO Kris Marszalek however immediately tweeted, the funds were safe and trading resumed within 48 hrs. 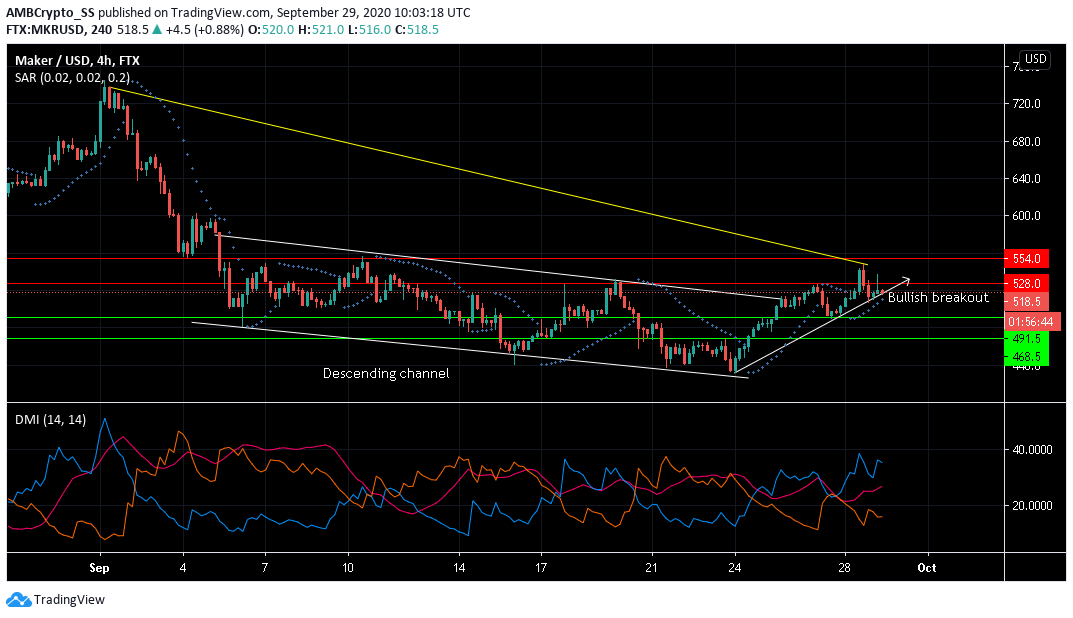 Since the September 2nd market-wide bearish rampage, Maker had finally witnessed some price recovery, towards the end of the month. The digital asset was at press time, trading at $527.5, comfortably above its immediate support levels.

Through this month, the price found itself oscillating between a descending channel. The formation of such a pattern was indicative of a potential bullish price breakout, as can be seen from the charts.

Maker witnessed a price surge of almost 20% since its bullish breakout on 24 September. At the time of writing, it was further seen testing the resistance level of $ 528, as the bulls continued to stay strong.

The dotted lines of the Parabolic SAR below the candles were signaling an upward price trend for the cryptocurrency.

Another technical indicator, the Directional Movement Index (DMI) showed ADX (orange) below 20, with +DMI (blue) above -DMI (pink), hinting towards a bullish scenario for the next few days. 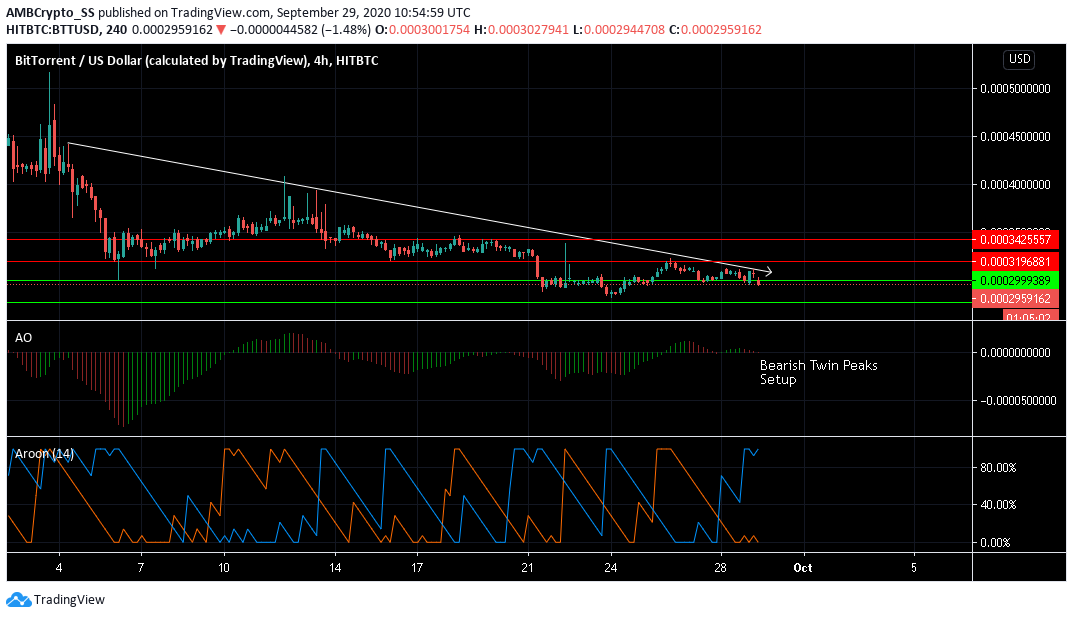 The digital asset could witness a corrective move to the downside as it continues to be on a downtrend. BitTorrent was seen falling back to the immediate support level of $ 0.00029 twice over the last 48-hours.

The Aroon indicator with the Aroon Down (blue) rising above the Aroon Up (below), in a bearish crossover was also signaling a selling sentiment. The Awesome oscillator’s bearish twin peaks setup above the zero line, with the second peak lower than the first followed by 3 red bars, further painted a bearish scenario.

If the downtrend continues, the price after claiming the second support of $ 0.00027, could see a reversal at that level.

Is Bitcoin back in the lead? Falling ETH IV suggests so

How long will the US dollar call the shots with Bitcoin?