One moment Bitcoin was at $9,200, the next, it was below $7,900. The price has exhibited extreme volatility this week. On BitMEX alone, over $500 million longs have been liquidated in the last two weeks. 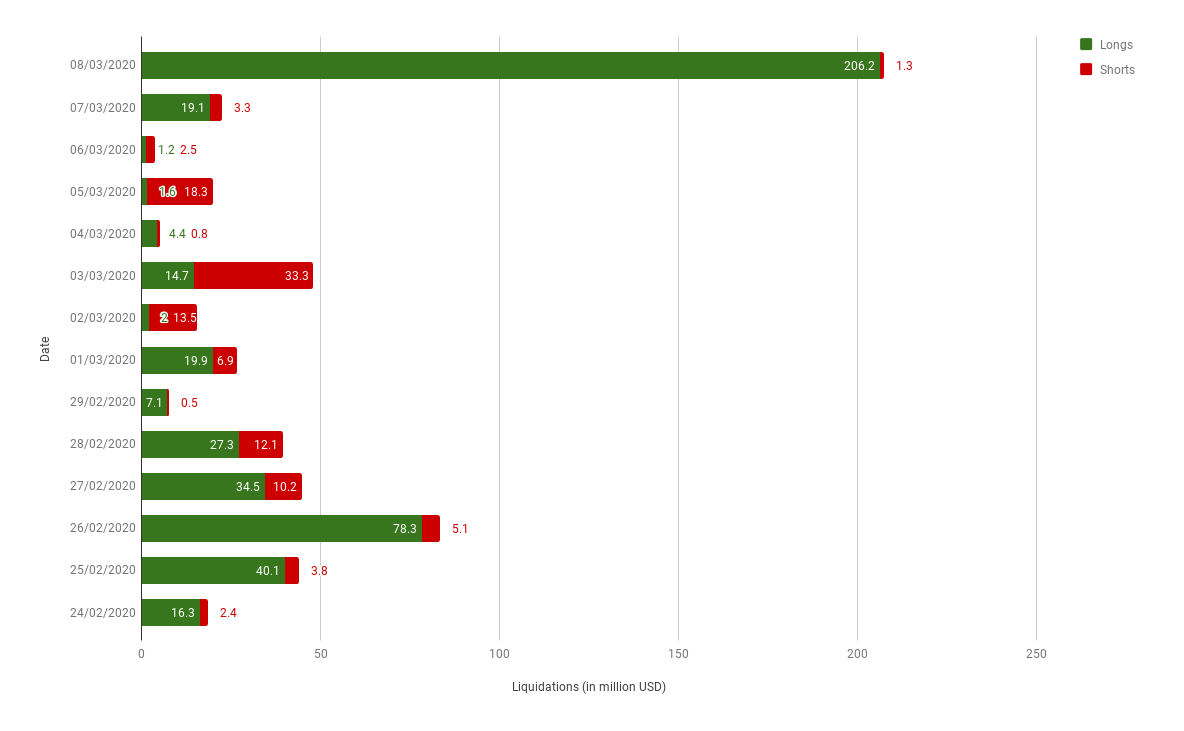 As seen above, the number of longs liquidated due to yesterday’s $1,000 move caused liquidation of longs worth $200 million. From a technical standpoint, it was a short squeeze, however, from a macro perspective, this is being attributed to global uncertainty.

Perhaps, Bitcoin is getting increasingly correlated to the financial markets. This crash comes when Oil markets have crashed more than 30%. Yahoo Finance stated,

“Oil markets crashed more than 30% after the disintegration of the OPEC+ alliance triggered an all-out price war between Saudi Arabia and Russia that is likely to have sweeping political and economic consequences.”

The cause, the long squeeze, the shorts…

As for the short squeeze, Ambcrypto‘s article outlined the reason.

“Per the data obtained from DataMish, longs at the time of writing were 32,000+ BTC and shorts at 4,800 BTC. In comparison, the market composition consisted of 87% longs. This long squeeze might take Bitcoin to $8,943 after breaching immediate resistance at $8,825. To complete the picture aka the long squeeze, there needs to be enough shorts with momentum to push the price down. This is being offered by hedged Vs. unhedged shorts.”

The longs played right into the shorts’ hand. At press time, the shorts [hedged and unhedged] were cooling off, however, during yesterday’s sell-off, the shorts spiked to a level last seen in January 2020. This triggered the sell-off causing Bitcoin to dive. 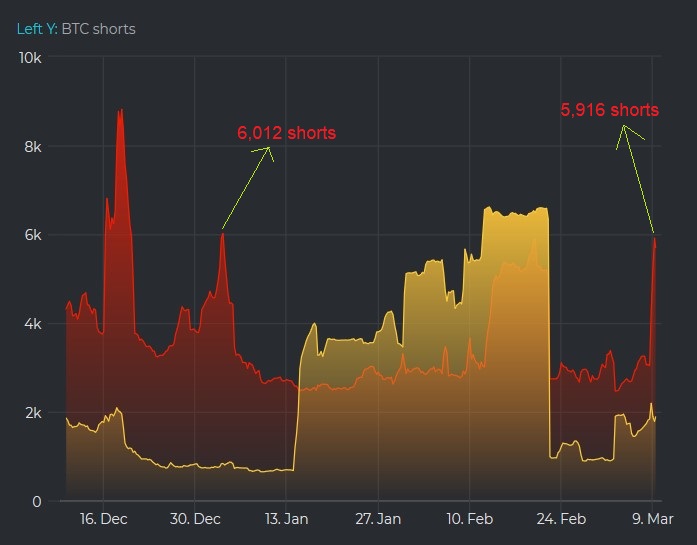 This disproportionate divergence caused the sell-off and liquidations worth $200 million or more.

At the time of writing, Bitcoin was still crashing and by the looks of it, the price will breach the 0.382 Fibonacci level at $7,981. The next level seems to be at $7,660, where BTC can find a respite from the bears. However, the last resort seems to be $7,386, a place of strong support. 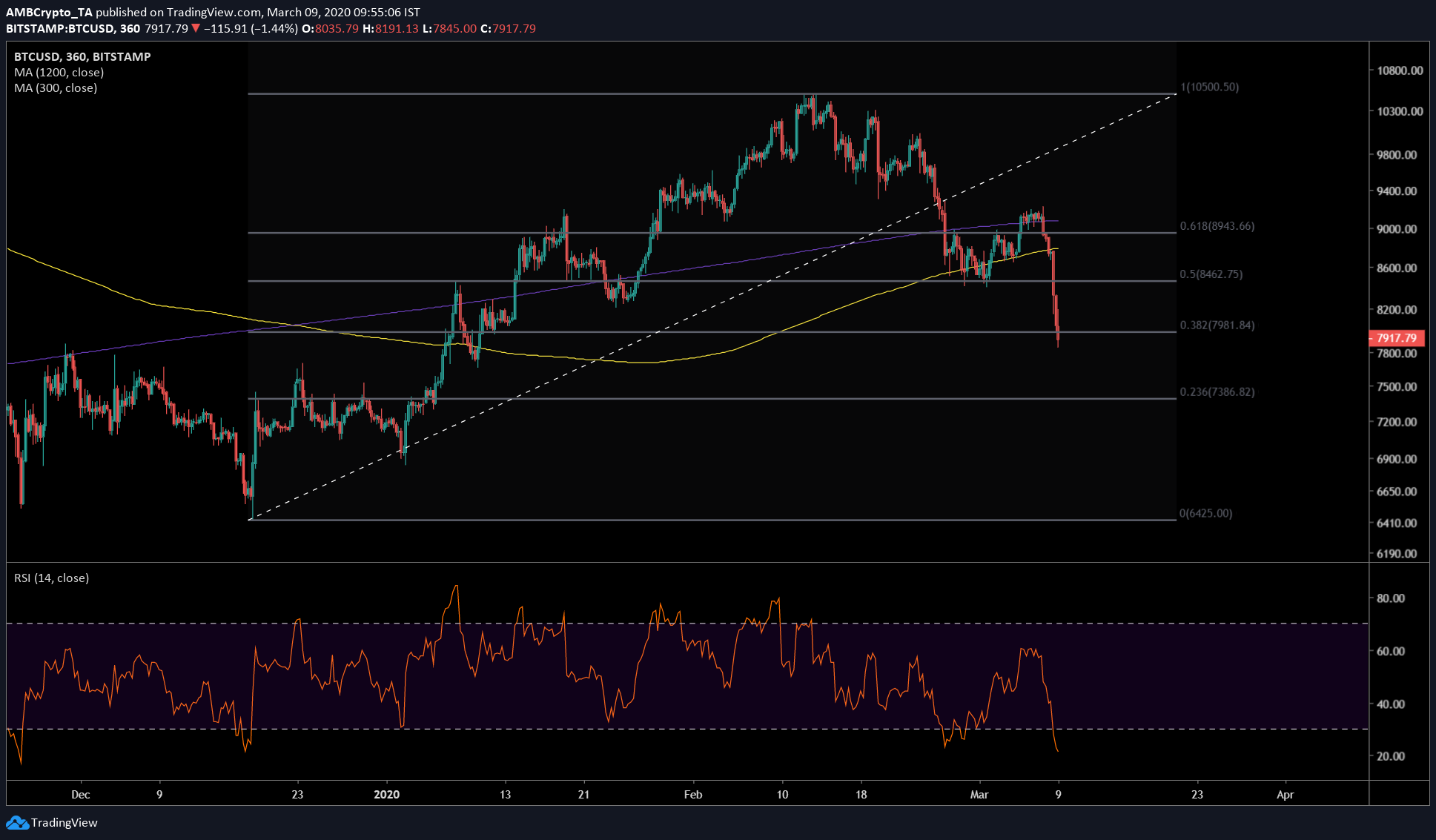 Although Bitcoin is said to be an uncorrelated asset, the recent crashes in Bitcoin when the stock markets plunged seem to question that narrative. When the S&P 500 and others dipped from February 21 through 27, Bitcoin price reacted accordingly. Even today, when the oil markets have dropped by 30%, BTC seems to be reacting to it.

The collapse in CME Bitcoin Futures volume and the speculation of institutional investors pulling was added support for this narrative. Perhaps, Bitcoin has become uncorrelated and this is an isolated incident? One thing to look out for is the potential recession and its effects on Bitcoin.