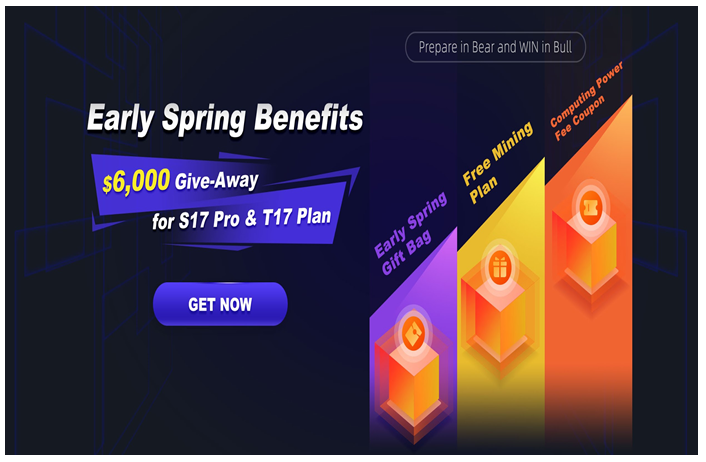 As we approach the earliest first day of spring in 100 years, BitDeer.com will begin its Early Spring promotion with 3 events worth millions of dollars in hash rate coupons, electricity bills, and vouchers. Each user will have the opportunity to gain up to $6000 in gifts as BitDeer remains a low-risk solution to the mining world. This comes after what was an exemplary performance during the January and Lunar New Year Festival Event, which saw new highs in computer power leasing.

On March 1st, BitDeer.com announced that it will be starting mining packages for CKB coins as it adds to its already stellar lineup of mainstream currencies such as BTC, LTC, ETH, ETC, ZEC, DASH, and DCR. With this addition, BitDeer.com looks to accommodate its diverse user base with a wide array of options for varying risk appetites. Released on March 2nd, the mining algorithm Eaglesong uses the latest Antminer K5 mining machine sought after by CKB miners. This plan pioneers the use of the newly-released antminer. The launch of the CKB mining plan by BitDeer.com was met with great enthusiasm, with all 3 replenishments sold out within 12 hours.

Red Envelope Extravaganza Worth Over $1 Million

By simply logging into the BitDeer.com account, customers can earn some great rewards during the early spring event. Upon successfully logging in, the free red envelopes given each time can contain plan extension coupons and electricity coupons of up to $2,000 in total. The prize amount for each red envelope varies and will be automatically issued to the user’s account.

It is a great time for new users to come on board as BitDeer.com will be shelling out some great gifts for first-time customers. Up to 10000 new users who register to BitDeer.com will take part in a free trial mining experience. Newly registered customers can simply send an email to support@bitdeer.com with their registered account to redeem the free mining plan.

In light of the recent announcement of Bitmain launching the new Antminer S19, BitDeer.com has plans to purchase these machines and announce sale details in the near future. BitDeer.com will continue to innovate and look to bring a multitude of quality options for its customers. For interested parties looking to participate in the Early Spring Event promotions, please visit the official website for more information.

BitDeer is the world’s leading computing power-sharing platform, enabling global users to mine cryptocurrencies in a transparent, reliable, and convenient way. It saves users from the complicated process of purchasing, installing, and hosting mining machines. Individual miners can enjoy the service with just one click.