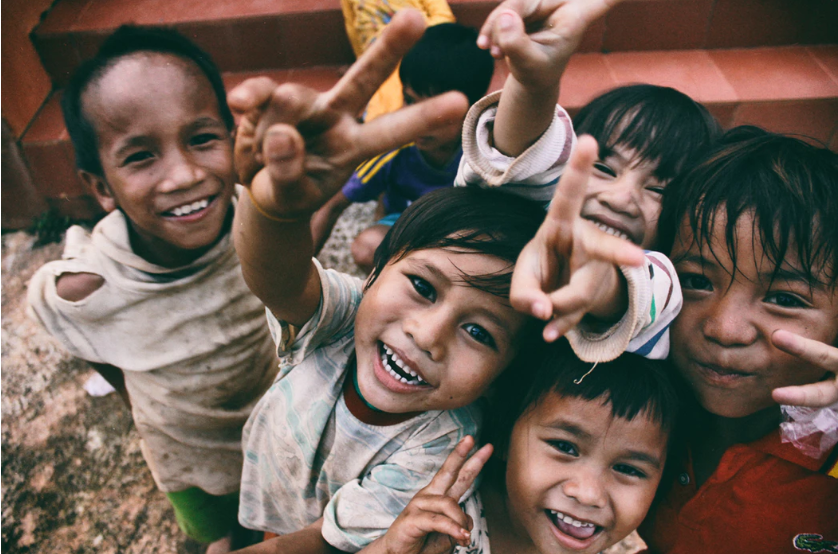 What makes Bitcoin, “BITCOIN?” From eye-catching rallies to deep dives, from the infamous Silk Road debacle to mainstream recognition, Bitcoin has been through it all. In fact, what’s attractive about the cryptocurrency and the market it represents is that the price pulls do not always happen as predicted. It is this inherently volatile nature that is appealing to many in the industry.

Eleven years and numerous exaggerated obituaries later, Bitcoin is still going strong. The ‘Digital Gold’ still holds on to an eye-boggling market share. It’s 2020 and needless to say, the creation of Bitcoin has been revolutionary in many ways. Without any overlord, this new form of digital money, one that is not linked to any government or central bank, makes it possible for industries across different sectors to take control of their money. It is for this reason many are now extensively leveraging Bitcoin and other cryptocurrencies by extension.

The appeal of cryptocurrencies hasn’t been lost to charities across the world either. Due to factors such as financial inclusion, environment, education, health, human rights, open-source software, democracy, and governance, many charities have now initiated the acceptance of crypto-donations.

The crypto-space has definitely matured, but Bitcoin is relatively young. Volatility and price swings are inevitable. Then, what about the ramifications of this high volatility on cryptocurrency donations?

Fidelity hung on, despite donations took a nosedive in crypto donations

Fidelity’s humanitarian arm, Fidelity Charitable, has received over $100 million in crypto-donations since its inception. Volatility did not have much effect in Fidelity’s case. Its latest report published in 2019 stated that despite volatility in the market, Fidelity Charitable investment growth continued to be in the “positive territory,” with an additional $5 billion in net dollars available to be granted to charitable organizations as a result. 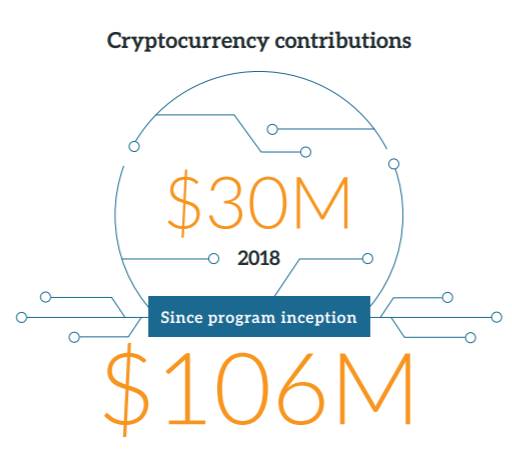 “Though cryptocurrency values cooled off considerably by the end of 2018, they began the year at a peak. Fidelity Charitable’s ability to accept cryptocurrency donations, including bitcoin, allowed these donors to eliminate any capital gains taxes and give the full fair market value to charity.”

Wounded by the crypto-bubble, what was initially anticipated to be worth around $86 million at the time, turned out to be $55 million after the great fall.

The Bitcoin-only charity, Pineapple Fund, was launched by an anonymous benefactor who went by the name ‘Pine,’ often touted as an experimenter in philanthropy. After the project accomplished its ultimate mission of collecting 5104 BTC, the Pineapple Fund bid farewell. Nearly $55 million was donated to 60 different projects, including the Free Software Foundation, the Electronic Frontier Foundation, and The Water Project.

Often touted as the next big thing, Bitcoin and other cryptos have been capitalized on by charities and non-profits, parties who remain one of the early adopters of crypto-donations.

Charity is a conscious act of kindness. The gift of giving without expecting anything in return is wonderful and rewarding. But, since the question is of accepting cryptos for charitable cases, the question is – are we doing it right?

Fiat + Crypto means – maximizing the volume of donations, accessibility to an even wider global audience, a new generation of supporters, and a younger demographic helping people in need. Unlike traditional financial entities, an important aspect that stands out in this new type of funding is the efficiency factor. Faster processing times and transparency at a lower transaction fee have paved the waves in favor of cryptocurrencies.

When Venezuelans were in dire need of funds amid the devastation caused by the bolivar’s drastic inflation, non-profits turned to cryptocurrencies. Moving money across borders is also one of the major benefits of leveraging cryptocurrencies, thus dodging banks and institutions that handle remittances. It was a charity called Givecrypto that provided direct crypto transfers to over 100 Venezuelan families in mid-2019. Its Executive Director, Joe Waltman, had said,

“Crypto has the highest likelihood of being helpful to people in places where money is broken.”

The donor, in this case, bags tax deductions when donating in cryptocurrencies. In jurisdictions such as the United States, crypto-donations are treated as property, meaning these donations are not subject to capital gains tax and hence, are tax-deductible. John Karr, COO at SophisticatedInvestor.com, spoke to AMBCrypto on the subject and said,

“Despite the volatility of something like Bitcoin, donors do have the substantial tax incentive of donating with crypto. Akin to stock donations, donors who transfer appreciated assets such as Bitcoin to a charity pay no capital gains and can write off the donation in its entirety.”

Binance Charity Foundation [BCF], the philanthropic arm of the Malta-based crypto-giant, Binance, jumped into the bandwagon of crypto-donations nearly three years ago. Since then, the non-profit organization has reportedly helped more than 100,000 people through its projects and Binance has achieved a net profit of $1 billion.

“..we believe crypto is a great substitute to the existing financial system. There are 2 billion unbanked population in the world. Crypto is a way to offer more efficient financial service with lower threshold, bring equality to the world. Donations in cryptocurrencies can help raise awareness of technology for social good… By combining cryptocurrency and charity, we want to emphasize that there is no right or wrong in technology, only in people using it. People should not be afraid of it but to embrace it and use if for good.”

“There is volatility in price for most of the cryptocurrencies. There are also exceptions, the stablecoins, whose prices are pegged to some kind of fiat currency or a stable value. We have noticed the change in price in the process of charity projects. Thus, we consider using stablecoin. We have already issued 2 stablecoins, the Pink Care Token and the Humanity First Token, to ensure the price change won’t affect the value passed to the end beneficiaries.”

As listed on BCF’s website, there are nearly 19 charity projects, most of which included supplies for children in underdeveloped nations across the world.

The cryptocurrencies used by BCF were Binance Coin [BNB], Bitcoin, Ether, PAX, XRP, and two other stablecoins, namely, Pink Care Token [PCAT] and Humanity First Token [BHFT]. Interestingly, the PCAT, despite being a stablecoin, is not backed by fiat currency.

PCAT is pegged to one year’s supply of sanitary pads for its Pink Care token project and is focused on sponsoring feminine hygiene products for young women in poor countries. BHFT, on the other hand, was designed in collaboration with Mercy Corps and issued as an impact token to improve the living conditions of refugees who fled from South Sudan to Uganda. The token is issued on Binance Chain with its value pegged to the Uganda Shilling, the fiat currency of Uganda, and backed by the Bitcoin reserve of Binance Charity.

A similar sentiment to that of Wu was echoed by Misha Lederman, Head of Communications at TronWallet. While addressing the volatility issue plaguing the space and its impact on donations, Lederman, in a conversation with AMBCrypto, said,

“Volatility of cryptocurrencies are a problem with a simple solution for the charity sector – the use of stablecoins. Say for instance that ALS Association, which recently worked with the Tron Foundation on a joint charity campaign, receives a certain amount in donations in TRX, BTC, ETH or BNB. The sending party can either convert the cryptocurrencies gathered as an accumulated amount into a stablecoin like USDT.”

Another leading cryptocurrency exchange that sprung up to coordinate crypto-powered aid projects is Coinbase. A non-profit organization called DustAid partnered with the crypto-platform in December last year. This enabled Coinbase UK users to donate cryptocurrencies to three charitable organizations, each of whom were fighting different causes.

Global platforms such as The Red Cross have also been one of the early adopters of crypto-contributions. It has already started accepting donations in the form of Bitcoin and Bitcoin Cash.

The first UN organization to hold and make transactions in cryptocurrencies is UNICEF.

UNICEF recently launched a crypto-fund initiative dubbed ‘Cryptocurrency Fund’ in October 2019 to receive, hold, and disburse donations of Bitcoin and Ether. The Ethereum Foundation reportedly sent 100 Ether as a contribution to this project. The New Zealand arm of the UN organization supported donations in USDC, Bitcoin Cash, and Litecoin, in addition to Bitcoin and Ether.

The latest cause in the news relates to the donations pouring in for Australia’s raging bushfires. The initiative, launched by Alex Saunders, CEO and Co-founder of Nuggets News had already collected 0.725 BTC, at the time of writing.

Despite the risks associated with volatility, philanthropic organizations around the world have embraced contributions in “mature digital currencies” to increase funding for global development and humanitarian work. In line with the same, James Wo, Founder and CEO of Digital Finance Group, said,

“The high volatility actually helps non-profit organizations get more donations. High volatility will bring huge wealth to big token holders in the bull markets. These people will have more motivation and capital to donate coins for developing the protocols and donate money for educating the policy makers.”

The charity ecosystem has felt a rising level of comfort with using cryptocurrencies. Blockchain and digital assets have steered the emergence of decentralized charity, especially in areas where fiat money and governments are ruptured. An increase in crypto inflows into philanthropy would also mean a growing number of infrastructures accepting cryptocurrencies. This would also motivate the ones in the mainstream to learn about the pros of the ecosystem. Further, the altruistic potential of the industry could be crucial to the mainstream acceptance of such assets.

Part of the reason why crypto-accepting charities are on the rise is the ‘trust’ factor. If a recent report is to be believed, fiat donations in the UK have been declining since 2013. This crisis could be due to the people’s fading trust in charitable organizations and their opaque functioning.

Source: DevsCommsLab | Donations in the UK since 2013

By leveraging blockchain’s decentralized ledger system, a donor has the power to verify every stage of his/her transaction process to make sure the funds are received by those in need. This brings about much-needed transparency in the crypto-donation industry, in addition to the instant disbursement of funds and accountability.

Every coin has two sides

Good and evil are the most common dichotomy that exists in every space. The same is true for the crypto-donations sector. Along with the real ones, there exist fake charities masquerading as genuine ones. The most notorious of them all has been the one set up by the Palestinian militant group, Hamas. After finding all its mainstream financing routes closed, the de facto leader of the Gaza Strip resorted to requesting people for Bitcoin.

According to Reuters, the latest tactic employed by Hamas was generating multiple wallet addresses rather than just a single one. On every visit to its website, the visitors are given a unique Bitcoin address to make it more obscure and complicated for the watchdogs and law enforcement to track the fund movement.

The cryptocurrency ecosystem has the power to influence billions. And while its present contributions to charitable causes cannot be understated, the full potential of cryptocurrencies in the charity ecosystem is still to be explored. It would be interesting to see more organizations accepting crypto as crypto, without converting it to stablecoin or fiat, a path that UNICEF has followed. As UNICEF Ventures’ Chris Fabian would say, this would be “a dumb block of value.”