Bitcoin’s price has been surfing turbulent waters over the past 3 months. Dipping to $6900 and spiking up to to $9400 in a span of 90 days, marked a volatile 3 months for the largest digital asset.

However, Bitcoin’s difficulty and the hash rate continued to rise over the past 90 days.

BTC’s difficulty and hash rate are two vital factors that exhibit the state of the network and miners.

According to a recent glassnode report shared with AMBCrypto, the mining difficulty briefly underwent a stagnation during late December but the increase in hash rate over the past 3 weeks triggered the BTC difficulty to go up as well. The difficulty is currently at an all-time high of 15.4 TH/s. 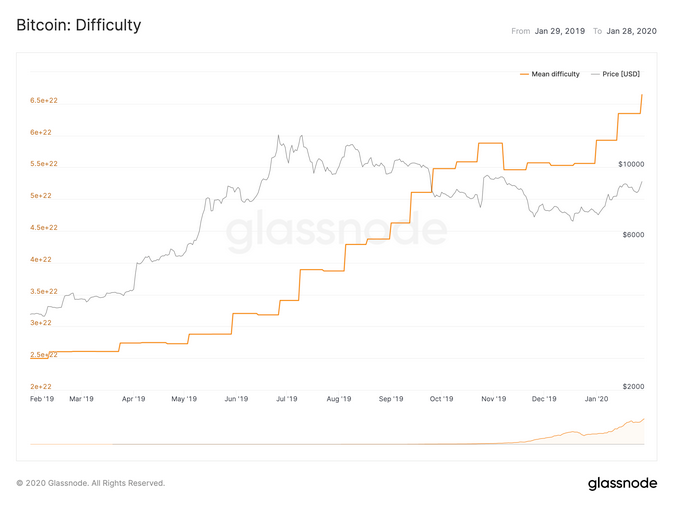 The report suggested that one of the reasons BTC’s difficulty was rapidly rising is because of Bitmain’s recent release of Antminer S17+. The newest edition of Antminer is a faster ASIC mining device, enabling high hash rates and efficient mining.

The rising price of Bitcoin over the last 3 weeks was also playing in an advantage for the old ASIC mining devices, making it ‘economically viable’ for mining. The report added,

“F2Pool, a private Chinese mining pool, increased their hash rate by about 1 exahash in a single week in January as people with older mining hardware rejoined the network.”

Previously, a Coinmetrics report had revealed the ascending difficulty has been bolstered due to the “implied hash-rate of Bitcoin maintaining ATH levels since the start of January 1st.”

At press time, Bitcoin was under the influence of a significant bull wave with a surge over 30 percent over the past 3 weeks. An increasing hash rate is usually bullish in the market, hence the spiking hash rate is a positive sign of things for Bitcoin’s valuation.

Bitcoin is being looked at as a ‘flight to safety’