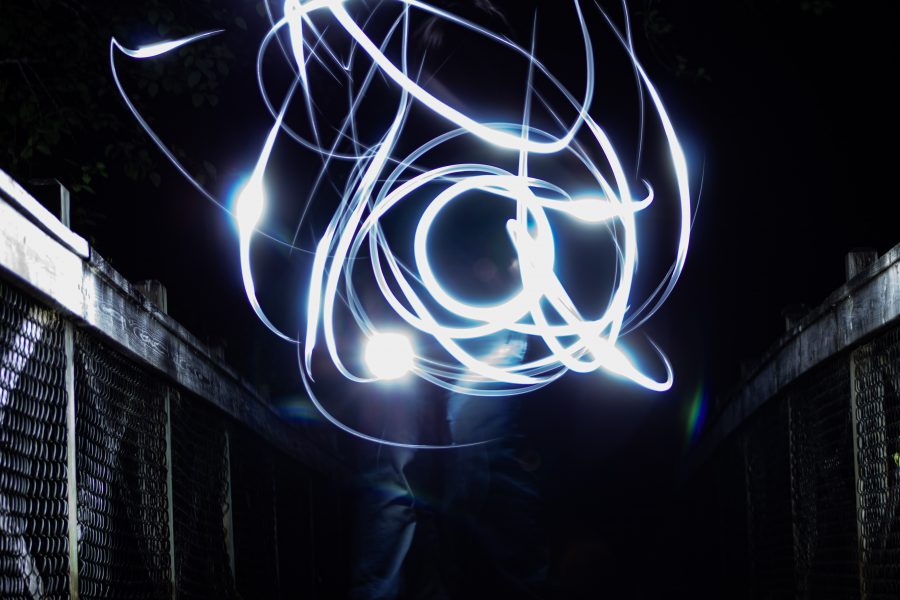 This is the second part of “Bitcoin ETF approval will bring the Glamour but not the Glow.” The first part can be found here.

No doubt a publicly-traded Bitcoin product would spur wider investments and interest digital assets as a whole. At present, exchanges are increasingly moving to shorten the on-ramp between fiat to crypto, providing easier bridges, and withdrawals with cheaper and cheaper fees. Stablecoins, fiat-backed digital assets, are the primary on-ramp to digital asset trading, with exchanges converting fiat to Tether [USDT] which can then be used for trading. Despite the process being transparent and the fairly simple ease of opening an account on Binance or Coinbase, the reputation of stablecoins, crypto-exchanges and cryptocurrencies has thwarted investment growth from a retail perspective.

Traditional investors are skeptical when it comes to cryptocurrency exchanges. Moreover, for every Binance, there are five Quadrigas. Hacks, despite being few and far between, are stuck in investors’ heads as a mainstay of the decentralized currency world. Hence, skepticism is warranted, one which can be pacified with the SEC’s seal of approval. Regulation, investment, and the price will see the maximum impetus of the Bitcoin ETF approval.

First and foremost, the approval of a Bitcoin ETF would be seen as a massive regulatory victory. Since 2013, the SEC has been raining down on the cryptocurrency industry on three fronts. Approval would mean that the market has improved, in the regulator’s eyes. Custody and market manipulation are key deterrents to the SEC’s delay of the ETF, and approval would mean an increased degree of trust in the cryptocurrency market.

A Bitcoin ETF will awaken the retail investing giant. Much like any other investment vehicle denominated in small investible amounts, a Bitcoin ETF will allow retail investors to gain exposure to the premier cryptocurrency in the market. As noted by many, Bitcoin and, at some point, the larger cryptocurrency ethos will not be relegated to either institutional investors or tech-savvy financiers, but ordinary ‘mom and pop’ investors will be able to diversify their portfolio with digital assets. An ETF could also provide an ‘on-ramp’ to more structured [but less regulated] forms of crypto-investing, if one were to go the cryptocurrency exchange route.

However, Swolfs, the ETF veteran, is of the opinion that institutional investors will not be rushing into the market just yet. He stated,

“Institutional investors are much more calculated in their investment process and don’t make snap decisions based solely on product availability. They can already access this market in other forms, so they may already have exposure to Bitcoin or other crypto assets.”

On the other end of the investment spectrum, Swolfs believes that retail investors will gradually move into the cryptocurrency market, owing to the absence of a “barrier” and the ease of purchasing the ETF in their “existing accounts.”

The volatility and sensitivity of the cryptocurrency market will be spiked with the approval of an ETF. As with anything in the market, an ETF approval, even with a delayed launch, will lead to a massive spike in the market. Earlier in the year, when SEC Commissioner Robert J. Jackson Jr. stated that a Bitcoin ETF was inevitable, the price spiked by 7.76 percent in a day. The volatility is true both ways though. Back in July 2018, when the Winklevoss ETF was thrown out, the price dropped by over 5.5 percent in two days. However, delays do not seem to have that much of an effect. 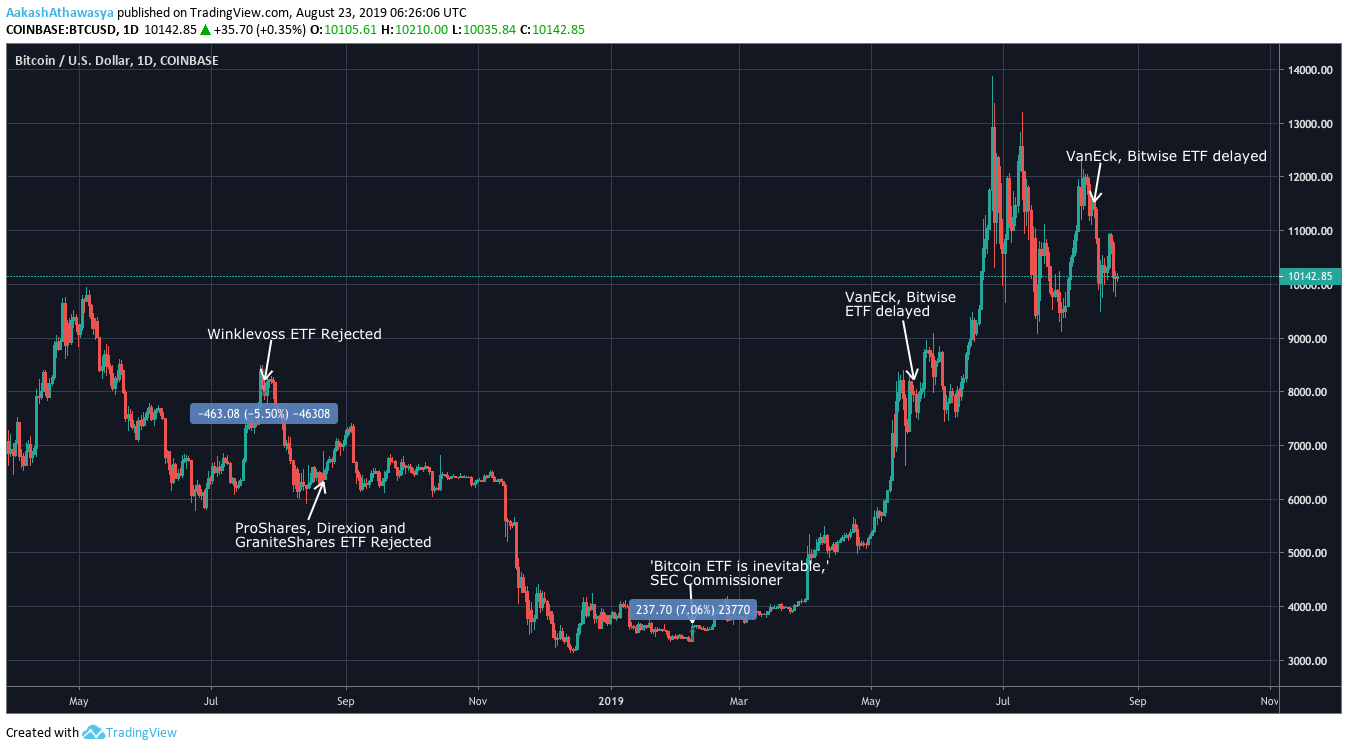 On the downside, the rejection could set crypto-mainstream investment back several places. Come October 2019, if both the VanEck and the Bitwise Bitcoin ETFs are rejected, then the three aforementioned success areas will see massive breakdowns. From a regulatory standpoint, the skepticism of custody, market maturity, and manipulation will still ring clear, and regulated cryptocurrency exchanges may be scrutinized as well. More advanced crypto-investment products will not pass the SEC’s standards for a while and owing to FUD, the price would not react favorably. Swolfs stated that price will see a reversal, albeit for a short period of time. He stated,

“A rejection could certainly have a negative short-term impact on prices for Bitcoin and other crypto assets.”

Bitcoin as an area of institutional investment, one that is approved by the SEC, will soon fade away and retail investors will have no way of diversifying their portfolio into cryptocurrencies, leading to an increase in skepticism.

From a larger perspective, a Bitcoin ETF will not change much. It is merely a new investment vehicle to channel the ‘big pockets’ of Wall Street and funnel the ‘mattress-money’ of small investors. This however, will not change the overarching goal of decentralized currency. While some in the industry believe that Bitcoin will benefit from an ETF, others are of the opinion that besides a brief uptick in the price, not much will change.

The logic behind this ‘nullifying effect’ is one based on source. An ETF is seen as something that combines two opposing forces to the Bitcoin objective; banks and government. No matter how much its curators dress it up, one of the main players in the ETF space will be large scale institutions itching to make millions via the volatile [and now regulated] world of cryptocurrencies. On the other end, the approval of this product will come at the hands of the centralized opposition to Bitcoin, the government. Wall Street and Capitol Hill joining forces to ‘allow’ Bitcoin to be traded would not go down well with maximalists in the cryptocurrency community.

As Mati Greenspan, Senior Markets Analyst at eToro put it in an interview with AMBCrypto,

“The idea of the SEC approving a Bitcoin ETF is basically saying that the government is going to approve something that the banks made. I don’t think Bitcoin cares very much about that.”

Investors and investment funds will be the major beneficiaries of the Bitcoin ETF, veterans who have been prevalent in the space for years will not, claimed many. Pierre Rochard, Founder of Bitcoin Advisory LLC, told Coindesk, that the investment vehicle will not be “some kind of massive magnet.” He added,

“Demand will continue to be driven by sentiment, rather than the availability of specific products.”

With the introduction of institutions comes the question of manipulation. The SEC has been very vocal about the crypto-market’s inherent manipulation, but it ignores the blatant manipulation that Wall Street has been plying for years now. With a product like Bitcoin, that will only escalate. Christopher Allen, Blockstream’s former Principal Architect, stated,

“The real reason they are doing it is they can play financial games to make them a much higher interest rate than what they would otherwise.”

With an ETF, the Bitcoin market can garner an air of legitimacy. But, at what cost? Its past image of being ‘the currency of the Dark Web’ will be well and truly eradicated. Institutional investors will look to Bitcoin with glee, rather than scorn. Retail investors will [peevishly] begin to acclimate it within their portfolio. Prices will shoot up, at least initially, but will peter out once the hype dies down. Other altcoins, barring Ether perhaps, will not approach the SEC for a similar product.

All-in-all, the Bitcoin ETF, if approved, will bring a lot of glamour to the cryptocurrency industry. From price to investment, everything will seem to be on an up and up, but that’s pretty much it. The larger goal of Bitcoin as a SOV or a MOE will be unaltered, the principle will seem to pander to governments and banks, while the only real investors that will be reeled in will be institutions, rather than the un-initiated. Mainstream media will be going berserk running ‘Bitcoin to the moon on the back of the ETF’ headlines, but the market and the goal of being a decentralized currency will go on, unfettered.

The approval of a Bitcoin ETF will bring in the glamour, but not the glow.

Bitcoin ETF will bring the Glamour, but not the Glow: Explainer Part 1