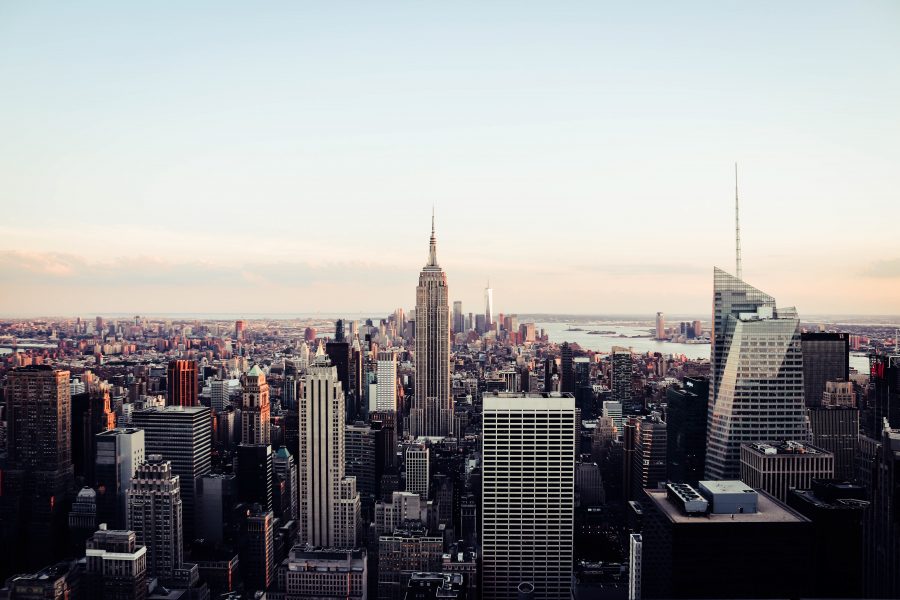 There’s something about the towering skyscrapers and wide streets of New York that gets the blood rushing. Home to the world’s capital markets and private money, the city stands as a testament to organized finance.

So tightly knit is the city to its financial overtures of control that New York is often seen as the meeting point of finance and regulation. This dichotomy of traditional finance and government control has put it at odds with the disruptive market of decentralized currency.

Bitcoin’s conception over a decade ago sent tremors throughout the world, but none more severe than in New York. As city officials began picking up the ruins of Bear Stearns and Lehman Brothers from the streets of New York, a currency that would never see this manipulated fate was being built. Born out of the financial crisis and centered in the Big Apple, Bitcoin has now come full circle, back to its cradle of birth.

New York, the face of centralized banking and finance, now stands in firm opposition to Bitcoin. But unlike the governments of the world, the eastern state of the United States is not trying to restrict the cryptocurrency as India and China are attempting to. Instead, it is trying to control it – through the regulatory chokehold of the infamous BitLicense.

Proposed in July 2014, the BitLicense is the regulatory term for the license that cryptocurrency companies have to secure from the New York Department of Financial Services [NYDFS] to commence operations within the state. According to the state government, a BitLicense is mandatory for companies that engage in,

The BitLicense, in its final 44-page form, was released in June 2015. Owing to the regulatory uncertainty of cryptocurrencies and rampant cases of the underlings of the Dark Web using Bitcoin for illegal activities, NY regulators began to clamp down on any company operating within the paradigm of digital currencies.

Acting Superintendent of Financial Services for the state of New York, Anthony J. Albanese, commented during the release of the BitLicense,

“Issuing the first BitLicense is an important milestone in the long-term development of the virtual currency industry. Putting in place rules of the road that help protect consumers from loss or theft and root out illicit activity is vital to building trust in this new financial technology. We will continue to move forward on evaluating and approving additional BitLicenses.”

In the years since the BitLicense has been implemented, the cryptocurrency industry has made significant progress. Bitcoin is priced at almost $10,000, altcoins have found use-cases, partnering with several companies located in New York, cryptocurrency exchanges [the high-profile victims of the BitLicense] have developed professional methodologies to vet projects, manage listings and verify volumes, and regulators are seeing eye to eye with the crypto-industry on several regulatory topics.

While other states in the U.S have embraced the disruptive force of decentralized currencies and blockchain technology like Florida, Wyoming, and California, New York is still siding with traditional financial folk. Hence, the question remains: Is the BitLicense really necessary, and what is its goal?

The Great state of Grudge

Given the severe nature of the BitLicense, there have been several crypto-grudges against NY state regulators. However, none have been as forthright in their actions and words as Theo Chino, a candidate for public advocate who is known for his anti-BitLicense stance.

“Abolish the BitLicense” is the cry from Chino who, along with his attorney Pierre Ciric, have presented their case before a slew of judges in New York to eradicate regulations which they claim has been “outrageously burdensome.” The case of ‘has the plaintiff been “hurt” by the regulation’ stems from Chino having to close his business, Chino Ltd., a Bitcoin merchant service.

Not taking things lying down, Chino filed Article 78 to kick out the BitLicense through the New York Civil Practice Laws and Rules, challenging the actions of any state government agency imparting regulations.

According to Chino, during the initial hearings to issue the BitLicense, Acting Superintendent of the NY Financial Services, Ben Lawsky, who departed public office following the issue of the license, ‘ignored the findings’ and ‘moved’ to regulating the decentralized currency industry “without the proper constitutional authority.”

Hence, the BitLicense, from the plaintiff’s viewpoint, is more so about curtailing the development of the digital assets industry than about protecting the public, as per their claims.

From the Ground Up

Chino, in an email to AMBCrypto, stated that his first run-in with what eventually came to be known as the ‘BitLicense’ was in February 2014, following the above ruling. Five years later, the petition came full circle before the New York Court of Appeals, its final showdown with the state’s lawmakers in what will mark a bitter end to the case of Theo Chino versus the New York Department of Financial Services.

The crux of the issue is the state government’s ability to force and regulate the cryptocurrency industry within its jurisdiction. Chino however, stated that this license is not meant to protect consumers, but to “destroy Bitcoin,” adding that there is audio of a lawyer who confirmed it. On asked if this is a case of government overreach, he agreed and stated,

“It regulated as Bitcoin was money which is not. They should have asked for a academic study but doing so would have prevented them regulating.”

From Chino’s perspective, there was a fundamental lack of understanding of what Bitcoin or cryptocurrency was, prior to issuing a license regulating it. The motivation hence, was simply to destroy the currency, at least within the state.

In what was called the “Great Bitcoin Exodus,” the BitLicense implementation in the following years proved to be such. Many claim that the newly-introduced licensing requirement was too much, requiring exchanges that operate within the state to share information about their own operations and pertinent details about their customers to prevent money laundering.

Coinsetter, a New York-based exchange later acquired by Kraken, was one of the exchanges caught in the middle of the BitLicense ordeal. Speaking to BizJournals, Jaron Lukasiewicz, CEO of the exchange, expanded on the burdensome nature of the proceedings which included a 30-page application, a $5,000 fee, and a 20-page rulebook. Additionally, the license requires exchanges to share pertinent KYC details and information about their in-house operations, in order to prevent money laundering.

In total, Lukasiewicz stated that his company must have spent over $50,000 in legal fees and labor charges alone, a steep cost for early-stage start-ups lacking big money investors and operating in a capital investment-intensive state like New York.

Jesse Powell, CEO of Kraken which left New York in 2015, summed up every exchange’s BitLicense ordeal by stating,

“While we’re sure that the protection from New York law enforcement is valuable, it comes at a price that exceeds the market opportunity of servicing New York residents. Therefore, we have no option but to withdraw our service from the state.”

In a post titled “Farwell, New York” published on the verge of the exchange’s exit, Kraken executives called the BitLicense “abominable,” “foul,” and “cruel.” They went on to list nine attacks or rebuffs against the regulatory precedent, including the large expense to compete in a “small market,” the burden on global operations, dubious value, and reduced consumer protection.

New York, in pursuit of operational clarity, was not solely interested in the ‘operations’ within state boundaries. The exchanges complying with the BitLicense requirements were required to submit all information of their global customer base to State authorities, something many companies aren’t inclined to do to federal authorities, let alone the State.

The sheer magnitude of the “statist oppression,” as Erik Voorhees, CEO of another New York ousted exchange, Shapeshift, put it, of the BitLicense is continuing to be felt in this day and age, as the Theo Chino case proves. In the plaintiff’s opinion, harsh regulations are not meant to protect investors from the lure of cryptocurrency exchanges, but the exchanges themselves which have complied with the ‘burdensome’ guidelines. Chino said,

“Yes it is outrageously burdensome and it is meant to protect the regulated exchanges because it does protect them from liability because they followed the regulator.”

Wall Street, the gem of the financial world, is presumably influencing what comes out of state regulators. Banking elites who are subject to stringent guidelines themselves are also seeing this being meted out to cryptocurrency exchanges. Chino agreed that the sole reason for the BitLicense chokehold is the presence of the traditional Capital Market in New York.

On a more principled level perhaps, Chino is fighting a fight that is more than just his company and the state’s ability to restrict it; he’s fighting against the government’s ability to ‘define.’ By the New York regulators authorizing what is a cryptocurrency and what isn’t, they are trying to legally define what Bitcoin is and introduce legislation to tackle it. Chino, in closing, stated,

“Bitcoin is an Intangible Commodity. There is no legal definition at the state and federal level. That is what the whole fight is about.”

CBDCs may be centralized, but they won’t be central: IBM Study