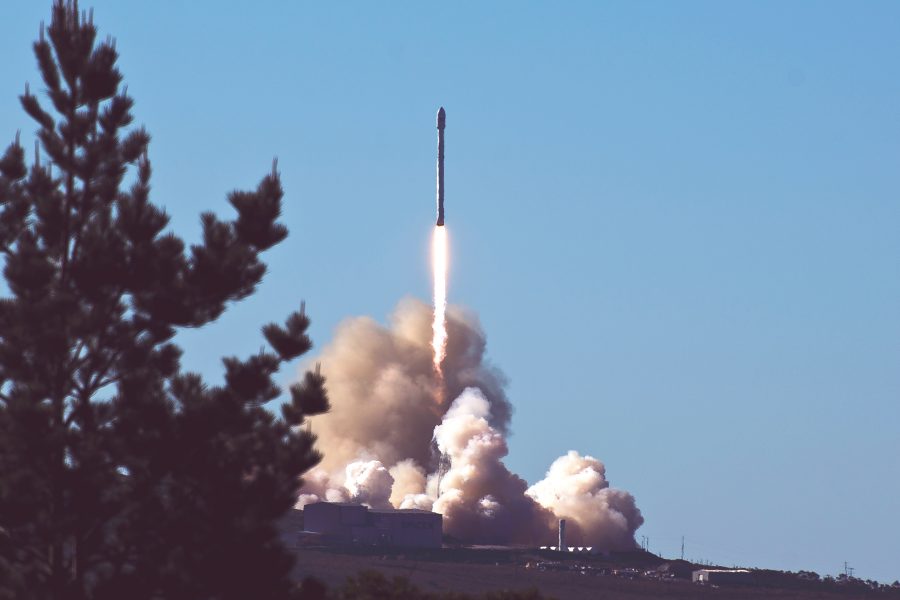 Binance, the world’s largest and arguably, the most trusted cryptocurrency exchange in the world, has made a name for itself since its launch in mid-2017. Led by Changpeng Zhao, a man who made a name for himself as the ‘good boy’ of the digital assets realm, the exchange has heralded a slew of innovations out of China, Singapore, Malta, or wherever Binance is based out of now, while also giving lift-off to the world’s most prominent successful ICO token, Binance Coin [BNB].

While the ICO market quickly turned sour in 2017-2018, BNB held its head high and soared on the back of several successful feats by its parent exchange. The tie between the exchange and its token, unlike any other, is undeniable. However, over the past few months, with Binance launching several new tools on its platform, BNB has received a price push unlike no other coin before it.

In 2019 alone, Binance Coin recorded a massive 390 percent YTD increase, breaking into the top-10 and overtaking notable cryptocurrencies like Stellar Lumens [XLM], Cardano [ADA], Tron [TRX], and Monero [XMR]. Among the top-10, BNB is the only digital asset that has broken its all-time high, doing so on April 20. It has since surged by 58.87 percent against its ATH. 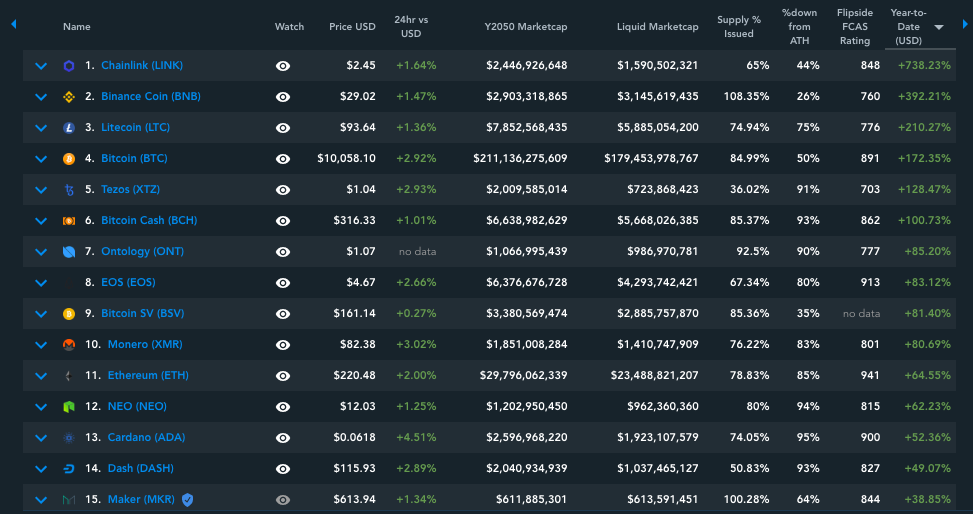 The price rise of Binance Coin flows parallel to its parent exchange’s comprehensive introductions this past year. However, one tool in particular buoys BNB’s price like no other, the Binance LaunchPad. The exchange’s token sale platform, as part of the IEO craze, has seen 7 token sales this past year, and was inaugurated by the flash-sale of BitTorrent [BTT]. But in March, the exchange changed the format of the same, which became either a blessing in disguise or a blessing by design for BNB.

Moving from a “first come first served” system to a “lottery” system, Binance announced that in order for users to participate in the token sale they had to hold a certain amount of BNBs. According to an official post dated March 24, the tickets claimed for the sale would depend on the number of BNBs held 20 days prior to the sale. The lottery drawn will be a “transparent, randomized system with a random selection of lottery tickets based on tail digits.”

Binance also foresaw a ‘price fluctuation’ in the price of BNB due to its implementation. Again, the lottery system could by design cause a rise in price of their native token with the periodic listing of every token sale that comes to their door. And no doubt has the price of BNB risen periodically, post the March 24 announcement, BNB shot up by 15 percent against the U.S dollar.

The exchange however, noted that the fluctuation could be written off.

“If BNB price drops, it is entirely possible the drop in BNB price will outweigh any gains made by the new token. That is first assuming you win in the lottery draw. Further, the new token being sold is not guaranteed to increase in price. It may drop in price.”

So far, the tokens that have been launched and completed via the lottery system on Binance LaunchPad are Matic Network [MATIC], Harmony [ONE], Elrond [ERD], with WINk [WIN] their latest token sale in the “Preparation Period.” 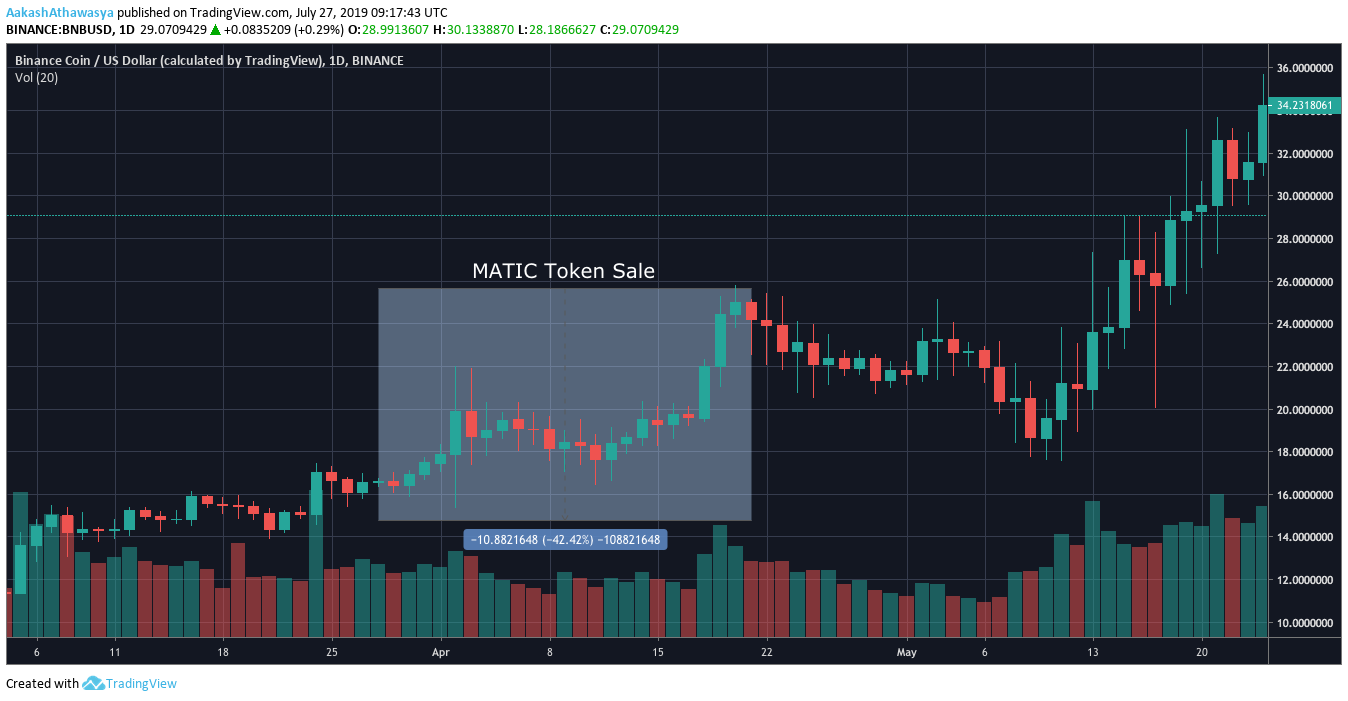 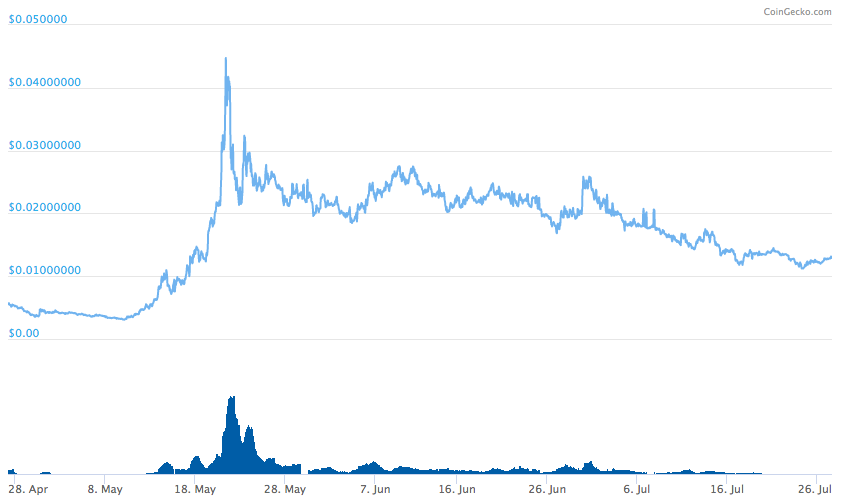 The token sale for MATIC began based on the final BNB balances on April 24. Therefore, the exchange’s native token began to skyrocket 20 days prior to the sale. On 2 April, BNB rose by 3.46 percent over the hour, with eager investors hoarding the token to increase their chances in the lottery system.

After a brief dip to $16.94, the price of BNB began to skyrocket on 11 April. Between April 11 ans April 20, the price of the token rose by over 45 percent and reached $25, which held till the scheduled date of the MATIC launch. However, a day after the launch, the price dipped to $21.78 i.e. by 12.94 percent. Nonetheless, it continued its upward momentum.

Days after MATIC’s token sale, the floodgates opened and the token burst into the top-100 on the back of a massive 1200 percent price gain. 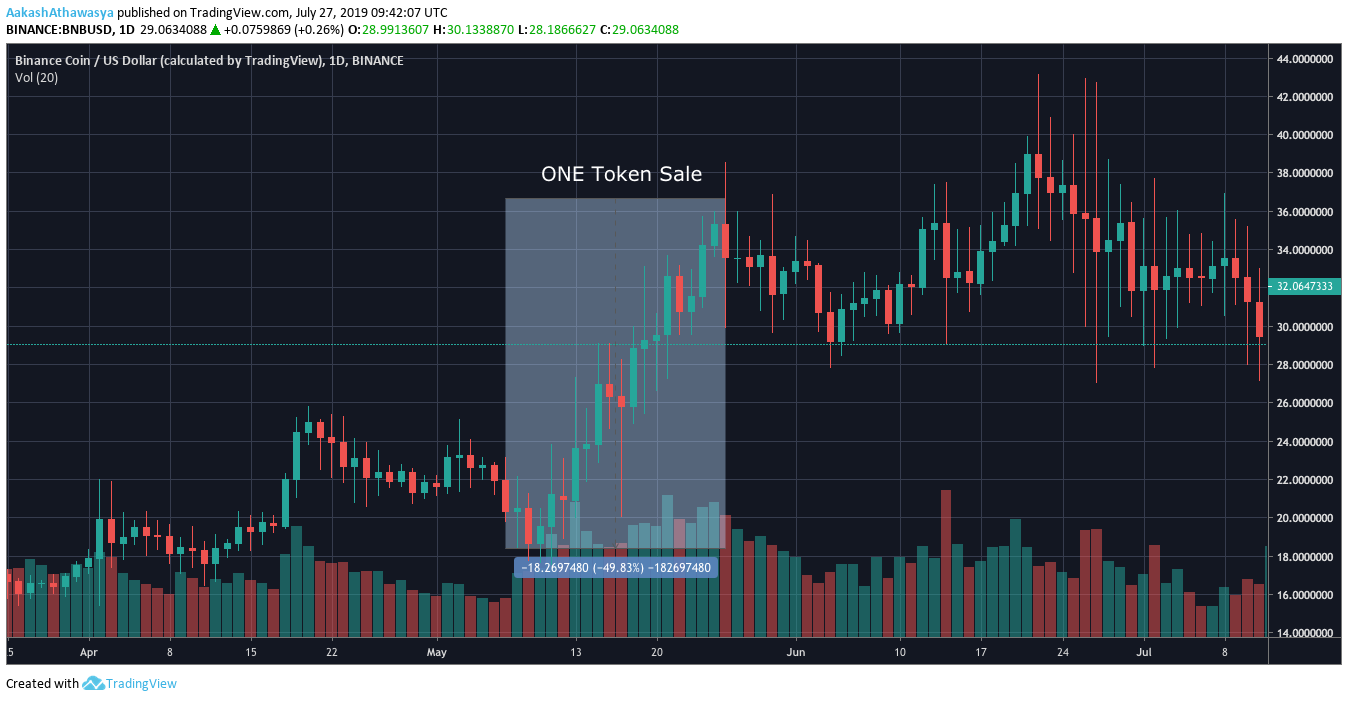 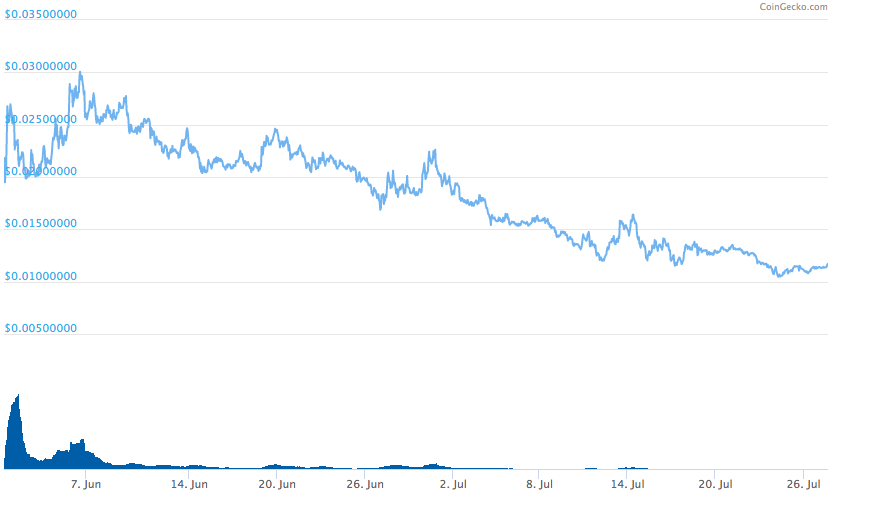 Binance began the token sale of ONE once the BNB balances were settled on May 26, which as the MATIC case proves, resulted in a massive price increase for Binance Coin. On May 10, BNB was trading at $18.68, its lowest price point in the past 20 days. Within the 20-day lottery settlement period, the price surged by a massive 88.32 percent and reached $35.18 on May 25, a day prior to the token sale.

Till the close of May, the price continued to stay upwards of $30. However, it soon fell below during the first week of June as the spotlight shifted to the Justin Sun – Warren Buffett luncheon and the anticipation around Facebook’s Libra. 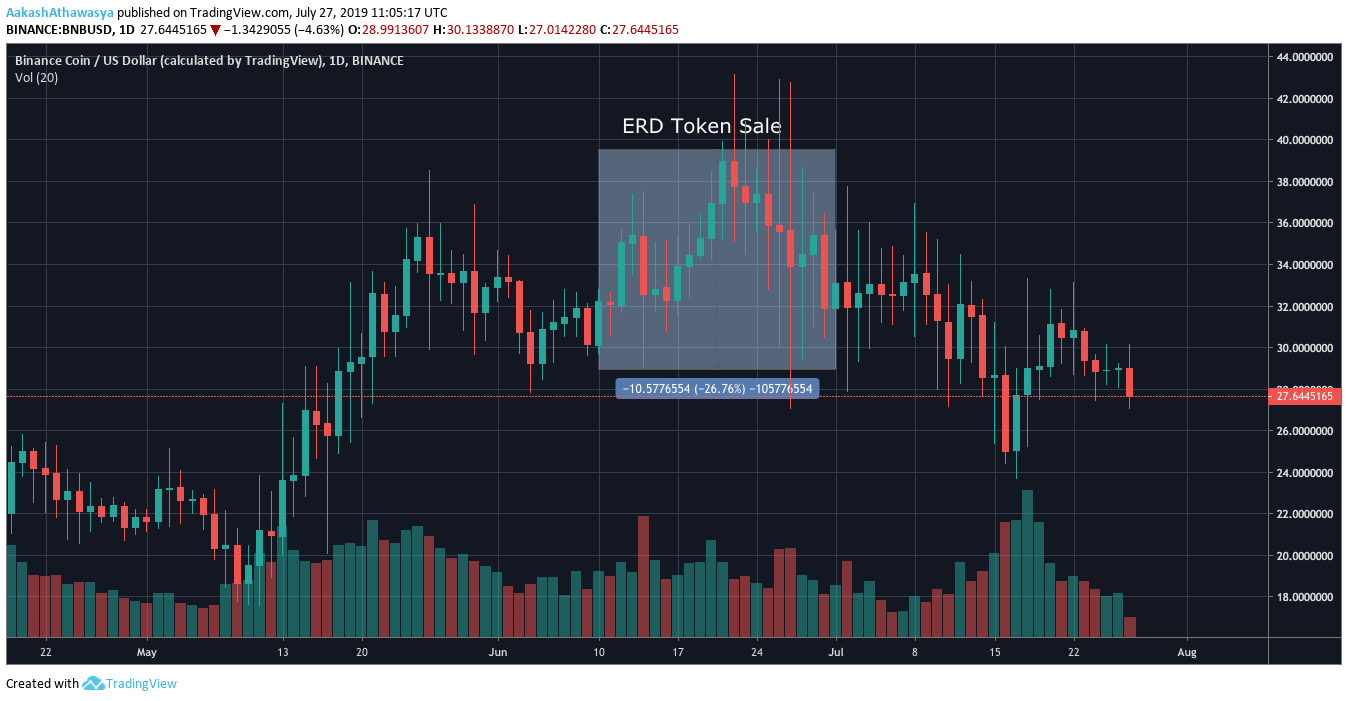 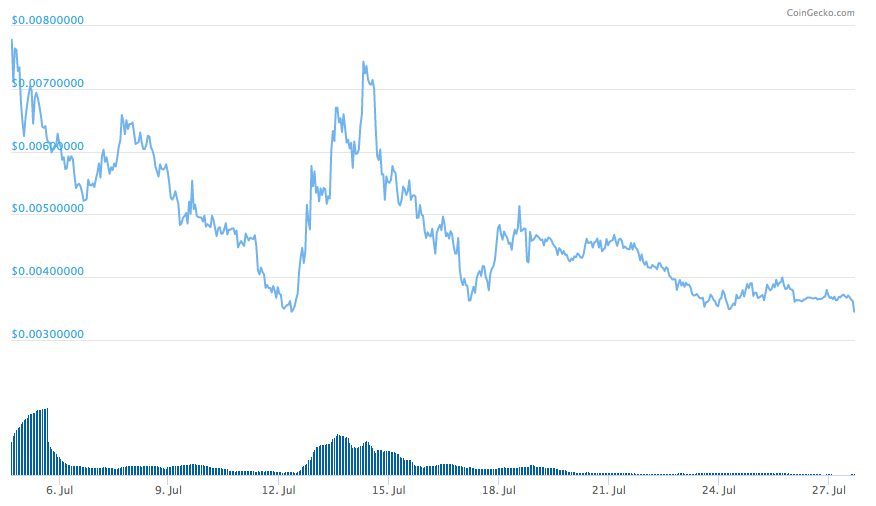 The ERD token sale was based on the amount of BNB held with prospective investors on July 1, but surprisingly, in the 20-day period prior, the price of BNB fluctuated. From June 10 to June 22, BNB saw a 29.07 percent price gain, from $30.56 to $39.14. However, this price surge largely tracked Bitcoin’s price growth owing to the Libra hype. From June 22 to the date of the token sale, the price of BNB fell by 16.27 percent to $32.84.

Post the token sale on Binance, ERD recorded a massive drop in price, especially over the last few days. The price of the token fell from $0.0077 to $0.0035, a massive 54.5 percent drop in the past month.

Although WIN has not been launched on the Binance token sale platform yet, the exchange has confirmed that the lottery draw will take place on the 31 July. Hence, the price effect can be seen over the current period. Additionally, the price of the exchange’s native token has been on the rise since July 17, with the price rising from $25.45 to as high as $31.56 within a 7-day period with continued persistence in the green.

Bobby Ong, Co-founder of CoinGecko, had previously told AMBCrypto that Binance’s token sale platform and its integration of BNB on the same was a “large reason” for the rise in price of the native token. Ong had added that the general profitable performance of the IEO platform is also to be credited with the rise in BNB price. Binance’s IEO platform, the Binance LaunchPad, has already amassed a Return on Investment [ROI] of 513.68 percent within a short period of time, according to the quarterly report.

For future token sales, the holding period will begin prior to the project being announced. The exchange stated,

About this, Ong stated that this change in the lottery system will make it more difficult for shrewd investors to “game the system,” and will lead to greater rewards for “long-term BNB holders” as the holding period is not specified. He concluded by saying,

It looks like Binance finally caught on to their token’s price fluctuation, thanks to the periodic swings of the “holding period” and its connotations on the lottery system of the imminent token sale. The first two tokens, post the lottery system introduction, led to a massive surge in the price of BNB, while the third [ERD] saw varied movement.

Regardless of the change in the lottery system, Binance Coin has seen periodic price swings due to the launchpad-induced hoarding. However, whether it was by disguise or design, Binance looks to be committed to long-term BNB hodlers.

Tron’s BitTorrent saga is a collage of hits, misses and Justin Sun’s promises