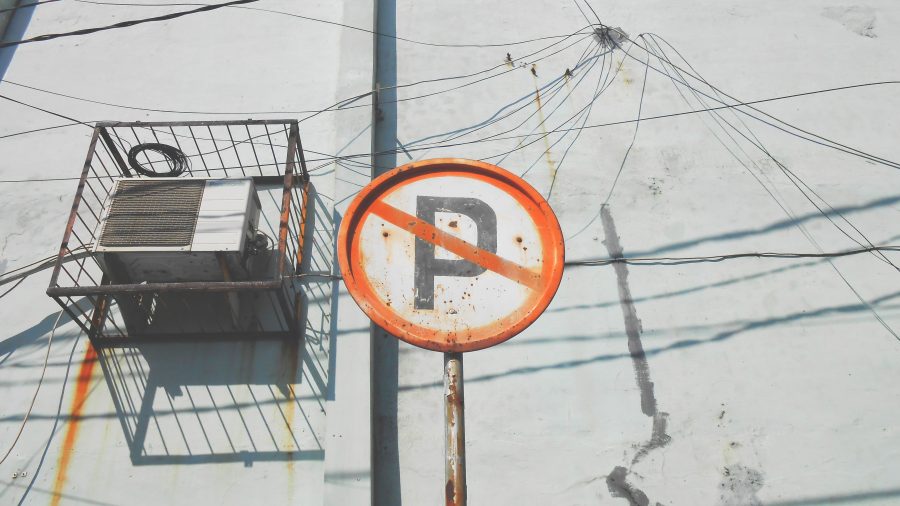 Exchanges have still not cleaned up their act.

In September, a month where the Spot market was left aside and the Futures market was at the fore, with the anticipation and eventual let down of Bakkt, the former saw significant movement. Cryptocurrency exchanges saw over $500 billion in trading volume, down by nearly $200 billion since August, and the tag of “fakers,” still not dislodged from the market.

The months leading up to September and October, when both Bakkt and Bitcoin ETF were in the limelight, cryptocurrency exchanges were vilified. Reports highlighting that over 95 percent of exchanges present trade volume that is “fake or non-economic,” in nature, data aggregators began wising up with their metrics.

CryptoCompare, a cryptocurrency analytics firm complied. Launching their exchange benchmarking system rating exchanges in June of this year, much like a Standard and Poor’s or a Moody’s would, they began dividing cryptocurrency exchanges by the alphabet. Only six exchanges secured the highest “AA,” rating – Coinbase, Poloniex, Bitstamp, bitFlyer, Liquid, and itBit. 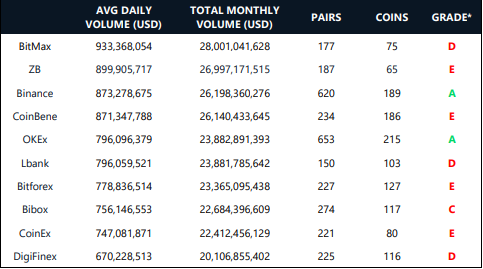 Given this backdrop of exchange’s rating, it comes as a surprise, that no “AA” exchange found a place in CryptoCompare’s Top-10 Crypto to Crypto exchanges sorted by average daily trade volume for the month of September.

Presented in the Monthly Exchange Review, BitMAX, the Singapore-based exchange took the top spot with $933.36 million average daily volume, and an overall “D,” rating, ZB.com took second with $899.9 million and an even worse “E,” rating. Binance and Maltese rivals OKEx were the only two “A,” rated exchanges with a trading volume of $873.34 and $796.09 million taking the 3rd and 5th spots, respectively.

Other exchanges in the top ten were LBank, Digifinex, Bibox, CoinEx, Bitforex, and Coinbene, none of which had a rating higher than a “C.” 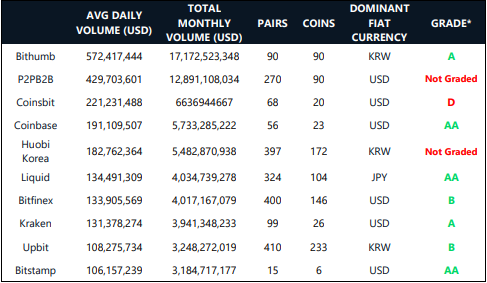 The remaining exchanges in the top-10 are Bitfinex, Kraken, Upbit, P2PB2B and Huobi Korea.

LACK OF DOUBLE As

At a time when the market looks bleak, the lack of transparent exchanges makes the regulatory pressure on the cryptocurrency industry that much more forthcoming. Regulators have warned that one of the main reasons preventing the issuance of a large scale retail crypto product is the ability of the market to be manipulated, as these exchanges are proving.

Cryptocurrency middlemen investors have separated the “real,” from the “fake,” as Bitwise Asset Management’s March report has pointed out while data market aggregators have introduced holistic tools to judge an exchanges’ performance. Now, its time for exchanges, themselves, to wake up.