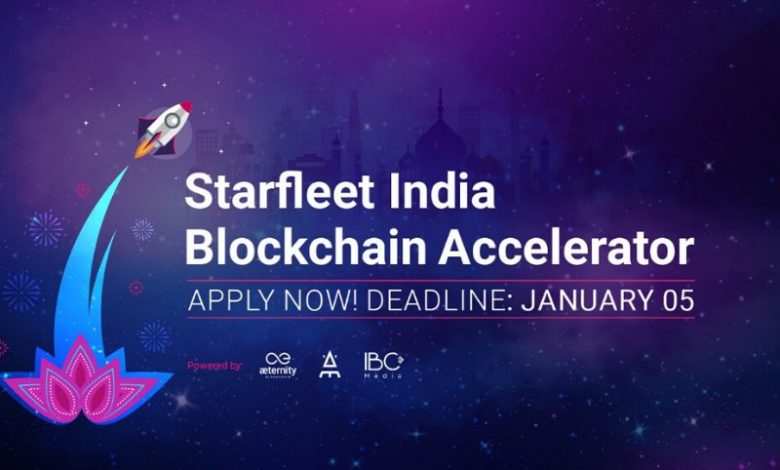 Early-stage blockchain companies can qualify for a direct investment

AE Ventures, a blockchain investment company that provides initial funding, acceleration, and advisory support to blockchain projects, announced the expansion of its Global Starfleet Programme into the Silicon Valley of India- Bangalore.
The Starfleet Programme is a global accelerator for early-stage blockchain companies. AE Ventures stepping into the Indian market opens more opportunities to the blockchain developer community in India, second only to the USA, in the world. Companies who complete the program qualify for a chance at a direct investment from AE Ventures. The application window for AE Ventures’ Starfleet India Programme will be open for all start-ups in late November on the website of www.aeternitystarfleet.com!

The Starfleet Accelerator will begin with a one-week boot camp, followed by a four-week-long intensive training program. Participating startups will receive mentorship and guidance from leading experts in the startup and blockchain space. The program includes workshops, presentations, discussions, and assignments designed to impart the practical knowledge required to build relevant blockchain products with real-world applications.

“India is home to a fast-growing ecosystem of blockchain developers and entrepreneurs, and we’re excited to support this network with our Global Starfleet Program. The Starfleet program gives entrepreneurs access to a global network of mentors, funding, and knowledge; something that is truly priceless to startup founders.”

The AE Ventures team will come to India in November to establish their presence in the Indian blockchain ecosystem in cooperation with IBC Media. IBC Media is a marketing solutions firm for emerging technology companies. Founded in 2017, the company has helped pioneering blockchain and AI companies through their robust growth services. The company hosted the International Blockchain Congress, the largest blockchain conference in Asia, in August 2018 in Hyderabad, India.

Starfleet Accelerator is also opening its doors to India’s developer community with a series of meetups held in six metropolitan cities, starting with  Hyderabad, Pune, and Bangalore during the month of October and November, with more meetups being planned for the first half of December. The full list of dates and locations for the meetups will be available on AE ventures and IBC Media’s social media accounts and on the official AE Ventures meetup page 10.10.2019.

“India is at the cusp of a blockchain boom and AE Ventures’ entry into the market couldn’t have been timed better. Over the past decade, we have seen several world-class startups come from India. Several second and third-time entrepreneurs are starting blockchain-based companies and I foresee a repeat of the SaaS and eCommerce boom with blockchain in India. We are stoked to be playing a part in this movement, especially with the association of a global player like AE Ventures.”

More details on the accelerator:

IBC Media, co-founded by Raghu Mohan, CEO and Kaavya Prasad, COO in 2018, strongly believes that Innovators are the key factors that decide the future and by enabling them to overcome their obstacles, we aim to pave the way for Socio-Economic progress in India. After identifying an evident lack of awareness and a surplus of underutilized talent when it came to emerging technologies and through painstaking trials and errors, IBC Media has discovered a number of effective ways to inspire awareness, adoption, and innovation. Our last year has been studded with some rewarding milestones like Asia’s largest Blockchain conference, The Genesis Developer program, partnerships with multiple state governments, an association with the Policy Think Tank of the Government of India, and we’re hungry for more. Simply put, if you’re an innovator looking to reach the top shelf, we’ve got the ladder.

TAGZ takes over the crown of largest cryptocurrency exchange by volume