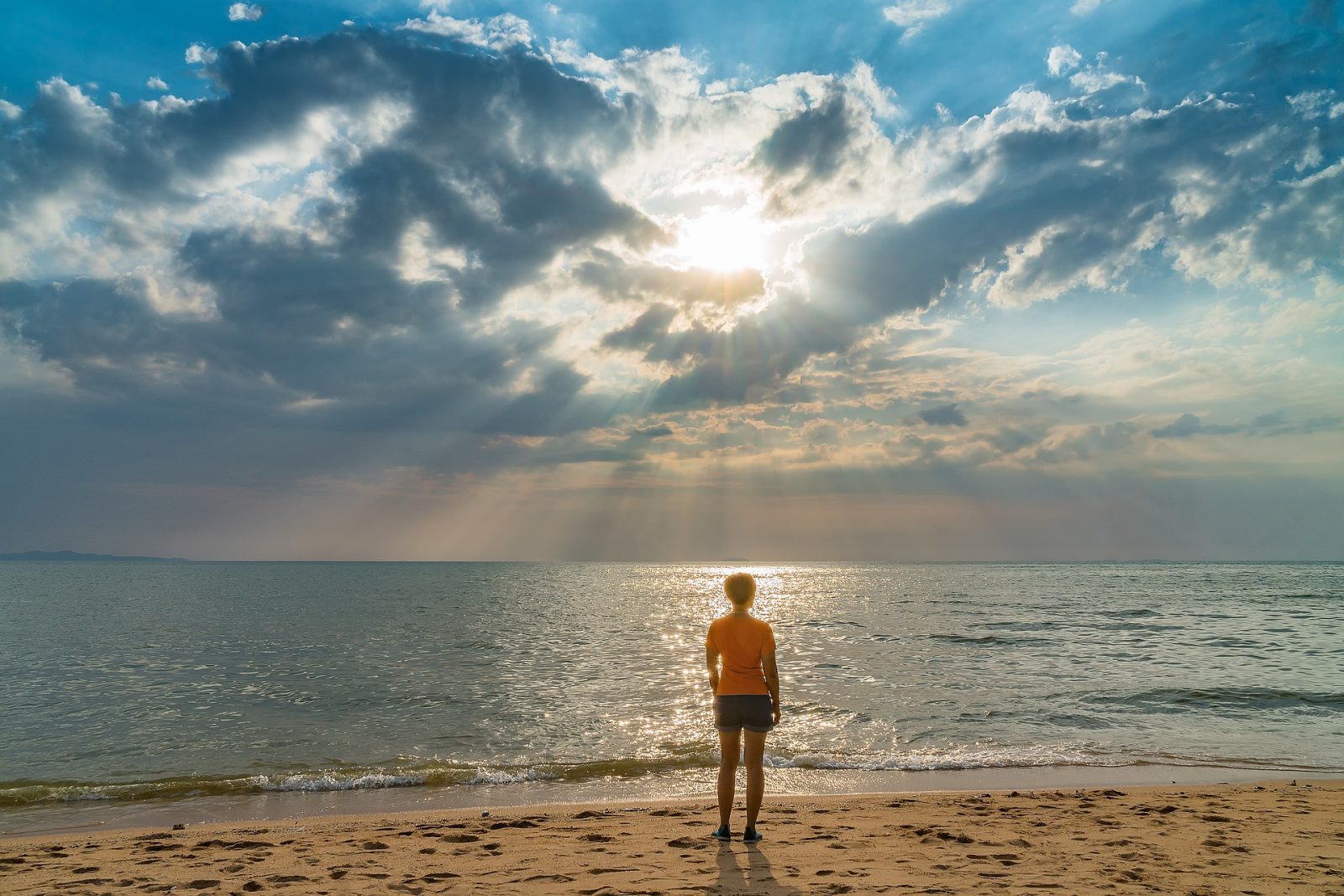 Robert Mapplethorpe, a famous American photographer from the late 20th century, spoke these famous lines. Frankly, I am sure if Mr. Mapplethorpe would have witnessed 2020 in the flesh, he would bite his tongue for expecting the unexpected.

I mean, just hear me out. If 3 months go, I would have told you that a sickness involving flu-like symptoms would end-up crashing the stock market, canceling all sports events, and practically triggering a global lockdown, you would have tied me to a pole and hung a ‘lunatic’ signboard around my neck. Thankfully, that hasn’t been the case on a personal level, but sadly, it has been from a universal standpoint.

Now, turning your attention from the COVID-19 pandemic (If some of you weren’t getting what I was talking about, that is), I would like to vent more on the unexpected side of things. Considering nothing is impossible – what if tomorrow, Bitcoin, and the collective crypto-industry, cease to exist?

What kind of financial structure would we be looking at and what kind of changes would unravel in the economic landscape?

This is going to be a very speculative read so, consider yourself warned. Don’t come suing me. Lawyers are expensive.

Bitcoin goes down to zero. Now what?

The first thing I can imagine after Bitcoin goes to $0 is Nouriel Roubini sipping a cup of espresso like a hypochondriac uncle, smirking at Arthur Hayes’ future because BitMEX will inevitably go down with Bitcoin (Poor Arthur, I like that guy). However, let’s not dwell too much into how it would affect personal lives and focus more on the fundamental changes that would transpire.

One of the main things introduced alongside cryptocurrencies was the technology of blockchain. To be factually correct, the idea of blockchain was coined way back in 1991, when Stuart Haber and W Scott Stornetta initiated the concept of cryptographically secured chain of blocks.

However, our main man (Let’s not get into gender debates for now) Satoshi Nakamoto revolutionized its use with Bitcoin, and currently, almost every computer engineer across the world is trying to ply their trade in this sector.

So, even if cryptos hit rock bottom and disappear in the next 10 years, the utilization of blockchain is going to prevail, despite virtual currencies being so popular once.

One of the things that Bitcoin has taught the world, which nobody had thought of before just accepting the system in place, is the elimination of middlemen. I mean, for as long as humans have existed as a functional society, we have always been dependent on third-parties to get our work done.

Need to transfer money? Go the Bank. Need to distribute goods and services? Hire a distributor service. Need to contact someone with the phones down? Message them on Facebook and hope the platform doesn’t steal your data. The list goes on and on and to an extent, a lot of people have started making serious capital out of such ‘middlemen businesses.’

Now, without undermining the importance of middlemen, (Because let’s be honest, some structures work. Amazon wouldn’t deliver anything to our house otherwise) the elimination of these third-parties is something that would continue, even if cryptos ceased to exist because that idea is now prevalent in our mind.

This was a sentiment shared by Andrew Munro, Cryptocurrency editor at Finder.com, who told AMBCrypto,

Where art thou accountability?

One of the beauties of blockchains and a powerful idea which ascended along with it has been the ability to easily and better hold individuals and organizations accountable.

Before the era of blockchain, when was the last time any organization (Like governments) was forthright with all its financial records in the open? Was it ever easy to check whether an organization accused of corruption is actually profiteering using questionable means? Well, No!

Most institutions never felt obligated to present all the records at their disposal to the general public, with most citing that invaluable tenet called confidentiality. In fact, in some countries, some will go one better, claiming ‘national security concerns.’ Unless some legal action was threatened, most were just happy to provide the most minimum of records.

Blockchain has completely changed that as with Bitcoin, a level of transparency has been seen, something that was seemingly impossible a few years back.

Now, even if digital assets become irrelevant in the future, this idea of data and financial transparency would be carried forward and it could eventually make government corruption a thing of the past. Providing a secure and highly reliable mechanism for decisions to be publicly recorded on an immutable chain of data blocks in the future? Ain’t that pretty neat?

The Flawed Financial System; if not Bitcoin whats the next best option?

According to data collected by visualcapitalist.com, the financial sector around the world is the least trusted sector in the world with a trust percentage of 57 percent.

Any guesses for the most trusted sector? Well, leading the way is the Technology sector, which, by extension, refers to Blockchain and ergo, Bitcoin! 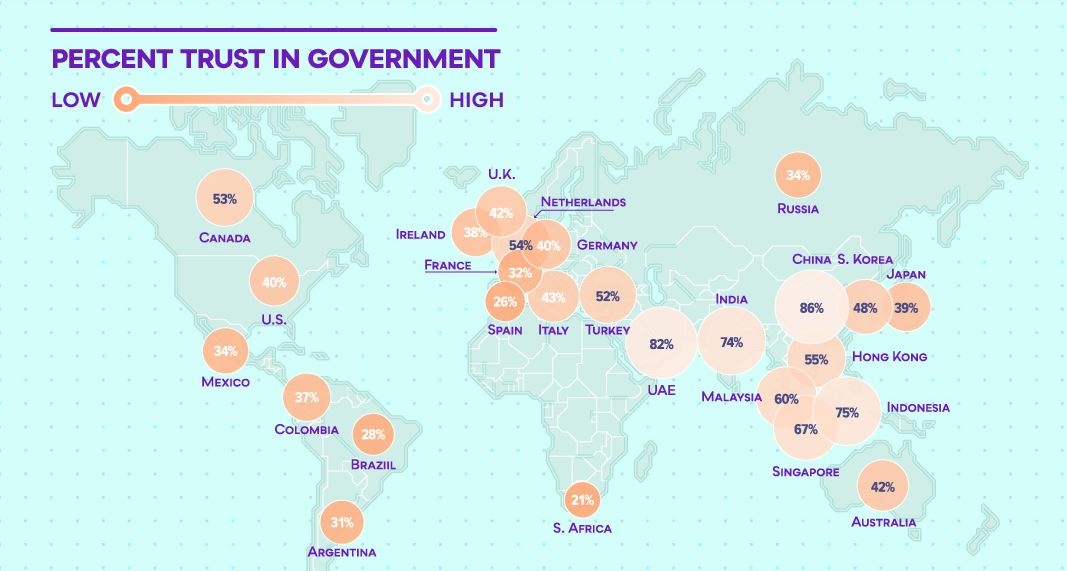 Additional data also suggests that citizens of strong economies in the West and Europe are highly distrustful of their governments.

That being said, how much can you really rely on reports such as these? Let’s take my example, shall we? I am an Indian citizen, and I’m confident that 74% of our population would rather see this government out of power, than wielding it. Then again, I could be wrong. But, probably not.

Whatever the case, the bottom line is that currently, Bitcoin offers the next best option to restore civility and trust in the larger financial system, something that can probably be attained by the introduction of blockchain.

Now, if Bitcoin were to be taken out of the picture, there would be no chance the global population goes back to trusting central-bank controlled fiat currencies; however, it would also be highly unrealistic to expect the government to set-up similar network systems mirroring cryptocurrencies.

Adam Traidman, CEO and Co-Founder of the BRD mobile wallet, put forward an alternative I completely agree with. He told AMCrypto,

“If cryptocurrencies are no longer in existence, people will still be looking for that safe haven to hold their wealth in. With the risen skepticism towards fiat money, I would not be surprised to see more interest in gold, silver, and other commodities as a reliable investment versus investing in the Forex market or even equities.”

Yeah, Cryptocurrencies are unlikely to go out of business

Although it was very intriguing to contemplate on a future without no cryptocurrencies, the ideas presented by this article like flaws of the current systems in place and the changing sentiment of the global population only solidify the argument; the argument that we are not exactly looking at a future without Bitcoin and the altcoin market.

But hey, it is always invigorating to further understand the importance of the existing system to improve in the future, so I guess Mr. Mapplethorpe was correct in his own way – always look forward to the unexpected.

For cryptocurrencies, is the flight to liquidity a ‘forgiving network effect?’