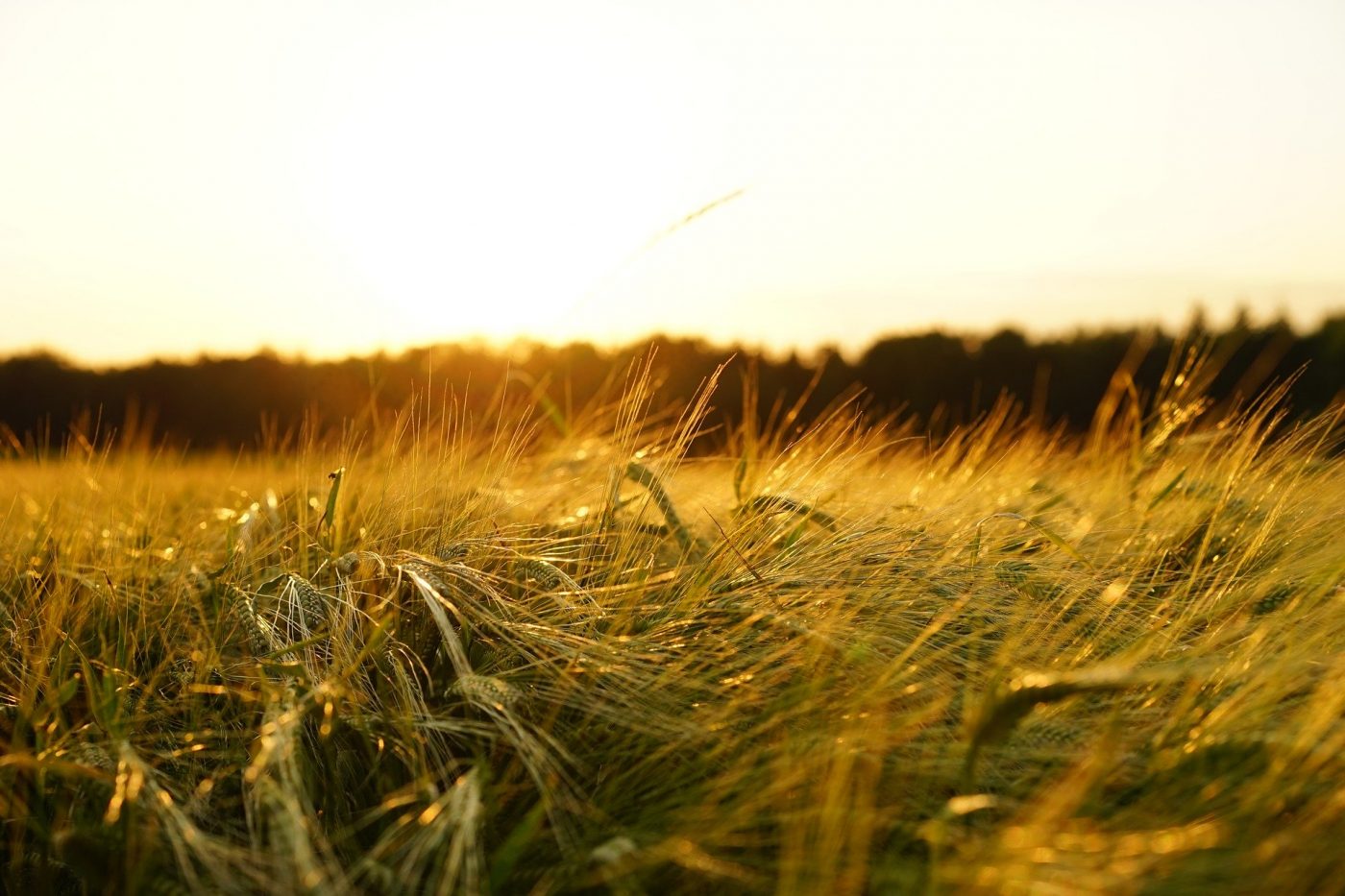 In an interview with Fox Business Channel on 15 August, Tom Lee, Managing Partner at Fundstat Global Advisors, was asked whether Bitcoin is a genuine safe-haven asset for investors. Lee had then responded,

“Yes. You can see it in the markets. Where there’s turmoil, the local Bitcoin prices tend to surge and trade at a premium, because people are trying to find ways to protect their money. So yes.”

History would suggest that Lee’s predictions in the past have sometimes been off-target. In his defense, however, I am sure nobody could have predicted that a virus with flu-like symptoms would eventually bring the stock market down to its knees in less than 3 months.

However, wasn’t Bitcoin meant to deal with such a financial crisis in the first place? In fact, the narratives of “uncorrelated asset” and “digital gold” were practically folklore within the Bitcoin community. And now, an unexpected economic meltdown is right in front of the beloved virtual currency.

Anyways, Bitcoin as a Safe -Haven – Is that narrative still valid?

Identifying what went wrong with the narrative

Alright, Alright reader! I know you already know, but let me explain!

On 12 March, as the COVID-19 spread took its toll on the global population, major countries went under lockdown indefinitely and its impact was witnessed on the traditional asset class. The S&P 500 sustained its worst drop since 1987, with the decline continuing after it fell from 2661 points on the 12th to a low of 2191 points on the 23rd.

The returns were catastrophic all around as the Dow Jones industrial average also posted its largest one-day loss, shaving close to 2,353 points.

So, what did Bitcoin do amidst such market chaos?

You know the answer. Bitcoin’s “uncorrelated asset” narrative went out the window and the world’s largest digital registered a 38% drop in one day, its largest depreciation in SEVEN years!

So, after Bitcoin plunged to $3800, its lowest valuation since January 2019, you have to give props to the world’s largest crypto-asset because its recovery has been impressive. In less than a month, the crypto-asset was back in the range from where it collapsed initially. Since 13 March, Bitcoin has risen by an impressive 91.36 percent, clocking in a valuation of $6,806 on 14 April (Note: Bitcoin did breach the $7k mark a few days ago. But, it fell below soon. Again, this is natural market movement).

Other market fundamentals for Bitcoin were improving as well, with its hashrate slowly sustaining a state of normalcy and the derivatives market noting a high level of activity over the past week.

On the other hand, the traditional asset class was licking its wounds. The decline was almost fatal and Wall Street needed a helping hand from the Federal Reserve to protect its market. A $2.2 trillion stimulus plan isn’t small assistance in my opinion, especially in light of the fact that no such plan was ever on the table for the digital asset class (Not that there ever could be).

In fact, the traditional asset class has been more volatile than Bitcoin itself; the same reason that has been used by the mainstream to attack Bitcoin all these years. Willy Woo’s chart below is a comparison chart, and it is a perfect example of “a picture is worth a thousand words.” 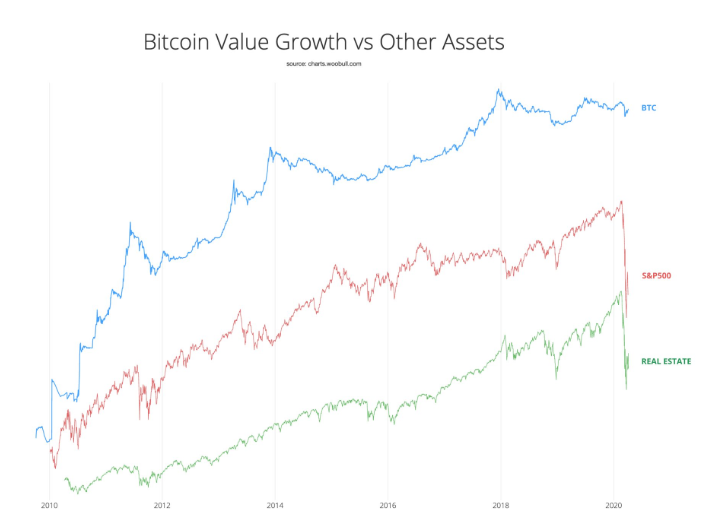 Is Bitcoin still a Safe-Haven asset?

Although there are countless perspectives in the industry, the bottom line is that Bitcoin is a Safe-Haven Asset. It all comes down to its behavioral nature over the past 11 years and here is where the concept of hyper-deflation comes in.

Now, there isn’t a drastic difference between hyper-deflation and deflation, but hyper-deflation is an extremely fast and comparatively quick form of deflation, one where the purchasing power of a currency meteorically rises within a short duration of time.

Although there hasn’t been a true case of hyper-deflation in the traditional market, a particular asset has scaled by approximately 65000 percent since August 2011? Any guesses? (Yeah, that is a rhetorical question).

Bitcoin’s nature of deflation completely defies the inflation-based model that is present in today’s financial system, with many traditional economists believing that the digital asset may lead to what they call the “Deflationary Death Spiral.” It is a situation where the decreasing value of the product or services (due to increasing purchase power of the asset) leads to lower production, which in turn leads to lower wages and demand, leading to a further fall in prices.

However, Jörg Guido Hülsmann, a professor from the Austrian School of Economics, believed that a Death Spiral will only exist when we are in a high leverage economy (debt-based) with the fiat in concern and when a part of the supply is created through fractional-reserve banks.

Bitcoin is above both those conditions as Bitcoin is neither the main fiat in concern in the current financial system, neither is it supplied by any central banks.

Hence, all the negative impacts associated with a deflation-based model do not apply to Bitcoin because the world practices inflation, something that isn’t going to change for a very long time, at least not in the immediate future. That is why Bitcoin is a great store of value and a safe-haven asset, because of its limited supply and gradual rise in valuation.

It is also important to take into consideration that even though we want to believe Bitcoin can become a legitimate part of the payments system, it hasn’t made tremendous development in that aspect. BTC’s credentials and face value as an investment asset have gotten the asset in this safe-haven discussion in the first place, which is something every Bitcoin perma-bull should accept before debating about buying a cup of coffee with Bitcoin.

Why is it not a strong Safe-Haven asset right now?

To understand this part, let’s take the example of the most popular ‘safe-haven asset’ that is “universally” accepted – Gold.

The precious metal has always acted as a hedge in financial meltdown conditions such as now (Gold’s price is up by 13.10% in 3 weeks), but that is not it.

Now, if you are still looking for an answer to why Bitcoin is not a strong Safe-Haven asset, it is because it is not competitive enough from a market cap perspective!

Gold has tremendous liquidity in the market and Bitcoin has not touched the same level just yet. Even though Bitcoin is mostly compared to Gold, it does not mean it holds the same level of strength in the market, something that is crucial when people are trying to hedge during a financial crisis.

This particular limitation of Bitcoin was observed by a few market intellectuals before this current crisis, with Spencer Bogart being one of them.

5 days after Tom Lee’s interview with Fox Business, Bogart, who is the General Partner at Blockchain Capital, gave an interview to Bloomberg. Although his views were similar to Lee’s and he expected Bitcoin to be a long-term Safe-Haven as well, he understood BTC’s shortcomings in the present market, stating,

“When you think about really severe crises taking place, a liquidity crunch, another global financial crisis, I think that Bitcoin will struggle to do very well from a price perspective.”

What notes though? Well, Bitcoin has those characteristics that could help it rival Gold in terms of being a Store-of-Value asset. However, it goes without saying that despite the world’s largest cryptocurrency’s excellent growth over the past 11 years, there is still a long road ahead.

Related Topics:bitcoinDeflationfeaturedgoldStore of value
Up Next

Trading with Coronavirus: Crypto may be down, but not out

Bitcoin’s flash crash may have opened arbitrage opportunity for traders