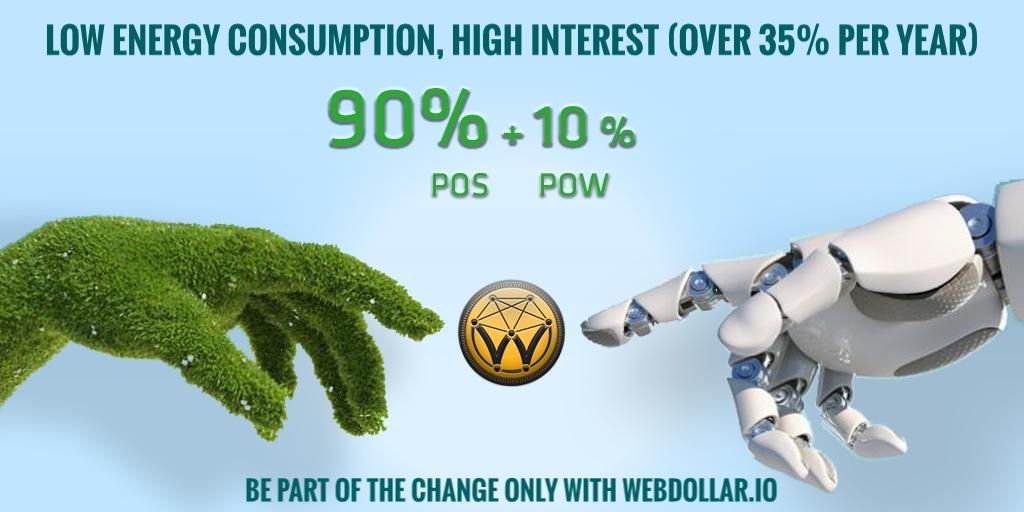 Digital assets such as Bitcoin, Ethereum, XRP, etc, have become popular household terms in the financial world over the past decade. With its initial objective of easing the process of payments and transactions, the cryptoverse has become extremely competitive over time.

Several years after the Bitcoin idea of a decentralized cryptocurrency was evident that cryptocurrency had an enormous potential to become more than a niche potential. Developers around the world needed to build safer straightforward simple ways of user experience. Web Dollar’s mission is to create faster adoption by creating the simplest user experience by developing a unique blockchain from scratch and putting it in the browser.

Webdollar mission is to act as a currency on the World Wide Web – the currency of the internet by offering a better BTC alternative, where users don’t have to worry about complexity and crypto being too technically complicated. The key factor is the Ease of Usability of crypto user experience.

For WebDollar cryptocurrency, the objective and soul purpose is to be the easiest cryptocurrency to use and mine and has its own malleable blockchain technology.

WebDollar or WEBD is a peer-to-peer digital asset that is completely native to the World Wide Web or basically, the entire internet ecosystem. As mentioned earlier, the major target of WEBD is to rapidly improve the adoption of virtual currencies by integrating a simple user experience online. With the help of WEBD, users are able to facilitate transactions on any web browser, directly eliminating the need for vulnerable channels like a Web server or RPC intermediary, i.e required in Bitcoin.

Simplicity echoes largely in the working principle of WebDollar as it is based on a blockchain called the Non-Interactive Proofs of Proof of Work(NiPoPoW). The introduction of NiPoPoW allows the use of a trustless light node that facilitates the functions of mining and verifying transactions. The entire process is carried out without needing to download the entire blockchain history for the Genesis block.

Only the hardest proofs and blocks are required in order to classify between the genuine nodes(miners) and the hackers in order to protect the blockchain.

The implementation of such a system allows the availability of the blockchain with a single click in the browser. In order to include the WebDollar library on a webpage, the user only needs to write the following one line,

After that, users can mine the asset, create wallets, send and receive transactions, check their wallet balances, etc, etc on their dedicated browser itself, using the NiPoPoW light blockchain. Therefore, the entire process basically avoids any form of installation, downloads and there is no need for any form of unique account creation or complex gateways involving usernames and passwords. At the launch on April 26, 2018, WebDollar was 100PoW but in the background, there is modern and very malleable technology.

If you accept Bitcoin and Ethereum in the form in which it exists today as a static thing, scalability problems and Proof Of Work as a model have some real significant limitations. There are a lot of people trying to improve this. However, in WebDollar we use WEBD technology because it is extremely scalable compared to Bitcoin.

Conversations over the past years about what crypto could achieve, began to get bogged down by core key questions such as „How to migrate from Proof of Work to Proof of Stake system?”, but thanks to Webdollar technology, Webdollar was able to migrate 2 times adjusting the economy model and as a detterent of PoW miners monopoly.

A first of its kind, WebDollar mining algorithm is composed of 2 different mining mechanism. The hybrid mining process is a combination of 33.(3)% Proof-of-Work & 66.(6)% Proof-of-Stake from January 29, 2019. The next-generation mechanism was apparently developed in order to withstand a 51% attack.  According to WebDollar’s official whitepaper,

“Using two different difficulty targets, one for PoS and one for PoW, this algorithm is decreasing the exposing risk for a 50%+1 PoW attack. The attacker cannot make a 50%+1 using only PoW power, even he has 100% of the PoW power of the network, he will also need 66.(6)% of the circulation supply in order to have a chance to make a 50%+1 attack, and an attack where you’re a big holder doesn’t have any logic.”

Now, even though WebDollar is designed based on Bitcoin’s Proof-of-Work module, the white paper mentioned that the mining process proposed by the organization is ASIC resistant and GPU unfriendly. This key difference allows the blockchain to be widely adopted and it is not bogged down with hardware-intensive units for mining. The clustering of a large mining farm is completely avoided and there are limited chances of centralization within the network.

In the future at the highest demand from the community and the multiple advantages of POS, it is possible to implement 100% PoS.

Advantages of Proof Of Stake:

– No expressive hardware needed to run;

– Investment does not depreciate with time vs hardware;

– Webdollar can be mined from any browser and from any device (computer, laptop, tablet, phone);

– The more you hold the more you gain, more than any bank. More than the average business investment. This is the power of WebDollar’s Proof Of Stake.

– Your investment staking reward is 35% per year. Math is simple, but using WEBD is even simpler.

– Cryptocurrency PoS mining in the near future becoming 100% green technology and Webdollar is FIRST.

14.2 billion in circulation out of 42 billion maxim supply mineable in the next 100 plus years. The smallest subunit can be broken to 0.0001 WEBD. The block time is around 40 seconds and the difficulty is retargeted every 10 blocks in the network.

As listed in the above chart, only 9.9% of the total supply is kept aside for activity involving the maintenance of the main net, event launch, future technology improvement, and future growth. The rest 90.1% of the supply is minable, and users are eligible to gain access to that percentage of WEBD.

Some of the major advantages of WebDollar are listed below:

WebDollar cryptocurrency can be purchased directly with Card or Paypal through the following link or from the following exchanges https://bitrabbit.io and https://p2pb2b.io

For more information, please visit the official site of WebDollar.io.

Can Bitcoin take over corporate treasuries in 2020?