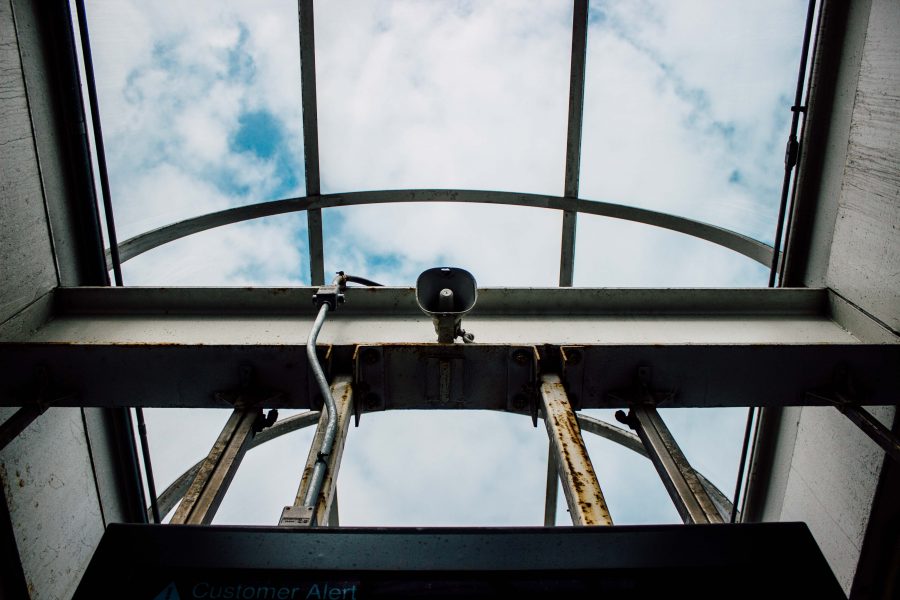 Mankind is a dedicated race and our insatiable thirst for innovation has been evident through history. Humans are obsessed with speed. For us, anything faster is better. Major innovations like telephones and trains, improved our speed of communication and transport, whereas simple developments like food-delivery apps, increased our ability to access a cooked-meal under 20 minutes. In short, our race takes pride in making things faster, and rightfully so.

“A purely peer-to-peer version of electronic cash would allow online payments to be sent directly from one party to another without going through a financial institution.”

This is the first statement from Bitcoin‘s revolutionary whitepaper that was released 11 years ago. Satoshi Nakamoto’s infamous idea, that would go on to create an industry worth over $200 billion in less than 10 years, did not mention the necessity of speed.  The anonymous figure’s only objective was to eliminate third party cost and create a payment system that is based on a peer-to-peer trust model.

However, not everyone bought into the same ideology. After appreciating what Bitcoin was back then, our ingrained affinity to make it faster manifested into a process. Bitcoin got popular, transaction rates increased, hence, the network got a little slower. Our speed-hungry consumer base got a little tired, and hence the concept of scaling Bitcoin surfaced.

Why was scaling even important in the first place?

Bitcoin’s working infrastructure is based on blockchain technology. For all its benefits of transparency and irreversibility of transactions, blockchain is comparatively slow.

The Bitcoin network can facilitate only 3.3 to 7 transactions per second whereas Visa completes around 1700. Even though Visa is a centralized system, opposite to Bitcoin’s working principle, the largest digital asset needed to amp up its numbers to rival the current competition in the industry.

Over the last decade, various solutions to improve Bitcoin’s scalability issue have been considered and implemented but the jury is still out on its relative success. This article aims to analyze factors that hinder its substantial rise and adoption.

The rapid rise of SegWit; was it failing to impress?

The main concern with Bitcoin’s transaction speed was its limited block size of 1 MB. Enter SegWit, and it theoretically improved a block’s ‘weight limit’ to 4 MB, without changing the block size. SegWit’s soft fork improved the block size without major changes to the code and it was implemented on August 24th, 2017.

Despite several initial concerns surrounding its launch, SegWit was off to a flying start in the network. By October of 2017, 7-10 percent of the total transactions were completed using SegWit and the implemented protocol was deemed to overcome all future scalability issues. However, few share the sentiment today.

SegWit’s adoption through 2018 and 2019 was analyzed to understand its adoption from a statistical point of view. 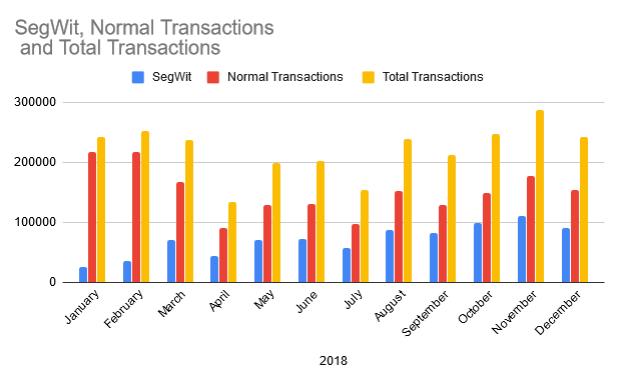 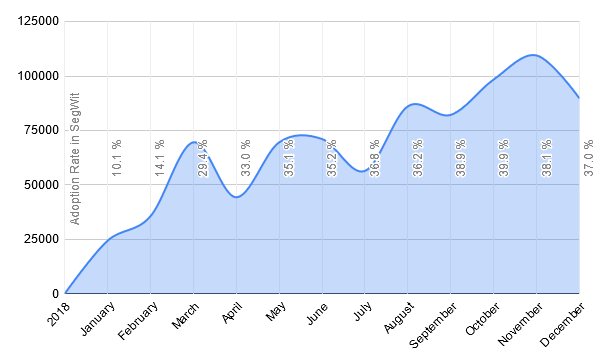 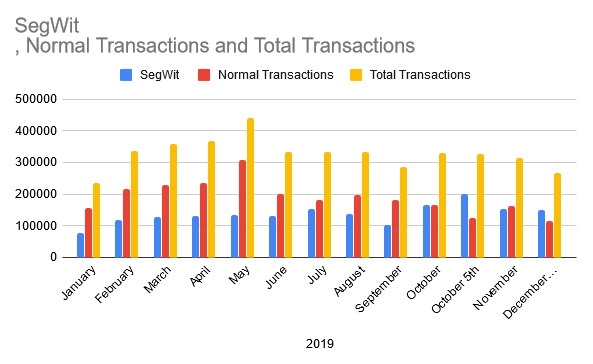 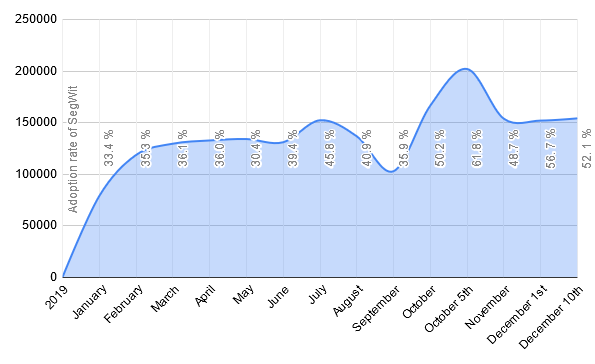 In comparison, 2019 has been rather stagnant in terms of adoption rate.

The growth in the number of transactions can be seen; however, the range did not scale periodically. From January 2019 to June 2019 [it is important to note, the aforementioned period was considered bullish], the adoption percentage mediated between the range of 33.4 percent to 39.4 percent, gaping only 6 percent in 6 months. The number of transactions increased over the period but remained hugely inconsistent.

During July 2019 to December 10th, 2019, SegWit reached its all-time-high adoption on October 5th, with a registered percentage of 61.8 percent. However, it dropped down to 47.7 percent on November 19th, and on record, the hike was only 9 percent during the 6 months. Transactions were incredibly inconsistent, scaling up to over 200,000 on October 1st but depleted largely during July-September, registering only 102,763 transactions on the 1st of September.

So, what was SegWit lacking exactly?

Just like any soft-fork in the network, SegWit also required a backward-compatible upgrade so that participants could access SegWit transactions. Despite all its advantages, every exchange or person who had a software system built around Bitcoin would need to upgrade their system to facilitate SegWit transfers. For major exchanges, it was a massive call to make, as an upgrade to SegWit would reportedly cost millions of dollars in terms of software development and for all its hassle, only a 1.5x-2x increase in terms of transaction capacity would be achieved.

Ironically, BitMEX and Bitfinex recently did convey support for Segwit after both the exchanges announced its support for bech32 addresses. However, the major catch was that users could only withdraw Bitcoin after the recent upgrade and to send BTC, it was still necessary for them to facilitate a transaction via a P2SH format address.

Another major issue with SegWit was the general disagreement and opposition from major bitcoin mining firms, notably Bitmain.

AMBCrypto spoke to Richard Dennis, Founder, and CEO of temtum cryptocurrency, and he suggested that SegWit is currently a solution to a problem, which essentially needs a better solution. He said,

“I do not think we will see adoption from the end-users, so it comes down to the wallet providers and the exchanges to implement this. Users don’t really care about this feature, but on the next bull run – when blocks start filling up and fees skyrocket – we will see a new conversation about scaling options.”

However, Luke Dash Jr, Core Bitcoin developer, believed that SegWit could be implemented in the system but from a different perspective. He told AMBCrypto,

“The point of SegWit was and is to fix the malleability issue. Adoption of Segwit as a goal in itself-if you are just sending A to B as a normal on-chain transaction, it shouldn’t be SegWit. Only Lightning and similar smart contracts should be using SegWit.”

Fron On-chain solutions to now Off-chain. Lightning Network or LN’s objective was to facilitate micro-transactions without altering the main blockchain or directly impacting Bitcoin’s core layer. While the Bitcoin community has desperately raged on lengthy debates on why LN is the one-stop scaling solution for Bitcoin, the problems with it noted by the rest of the space keeps piling on.

Since launching in early 2018, Lightning Network, [Just like SegWit] registered an impressive growth of over 15 percent per month as it reached over 10,000 nodes in September 2019. The numbers were significant but it did not give out a clear picture of the problems underneath.

After analyzing through endless arguments in the community and the current activity in the network, it can be identified that LN’s issues stemmed down to a few major problems.

1. Lightning Network did not exactly solve the transaction fee issue

LN has always been touted as the answer to the rising transaction fees of Bitcoin but it had its own set of issues. Firstly, Bitcoin’s congestion was a major factor that affected transaction cost and there were two parts to it. The first part was a fee that is charged in order to open and close the channel between the two parties, and after that, there is a separate routing charge to transfer the funds between channels.

In the past, Thaddeus Dryja, co-writer of the Lightning Network whitepaper, had also claimed that the rise of BTC transaction fees can inevitably impact lightning network and adoption, due to LN’s nascent stage.

Another crucial issue with Lightning Network is that the nodes on its network are required to remain online 24/7 to send or receive payments. The privacy aspect of the network is sacrificed in that manner and the network becomes susceptible to online thefts. Overall, despite its encouraging start, LN was nowhere near solving the scalability issues of Bitcoin, when it was facing its own set of problems with network and functionality.

“Lighting Network will never work. We have seen examples over the past few months where experienced users have lost many BTC due to the complexity. This is not a system for the end-user. While it is marketed as a decentralized Bitcoin system, in reality it’s a bad attempt to patch Bitcoin to scale.”

Are we close to solving the ubiquitous problem of scaling in Bitcoin?

At press time, it has been over 3,695 days since Bitcoin whitepaper was launched and throughout that period, the largest virtual asset has survived a lot of speculation and critics. Despite that, it would be naive to say that Bitcoin can go forward without making certain changes to its system.

After witnessing constructive institutional involvement from the likes of Fidelity and Bakkt, it is safe to say Bitcoin will not face extinction any time soon. Keeping that in mind, Bitcoin would inevitably undergo another bull run like 2017.

Considering Bitcoin is even more popular than it was 2 years, during its next bull run, the largest asset would face another congestion period as the rapid transactions will fill up block space. Upon saturation, transaction fees would reach staggering heights and the topic of developing a scaling solution for Bitcoin will be back in the frame.

Could SegWit and Lightning Network be the answer? Maybe not, but at the moment, without another solution, exchanges and organizations may resort to these imperfect fixes, as the need of the hour may eclipse the need for an ideal system.