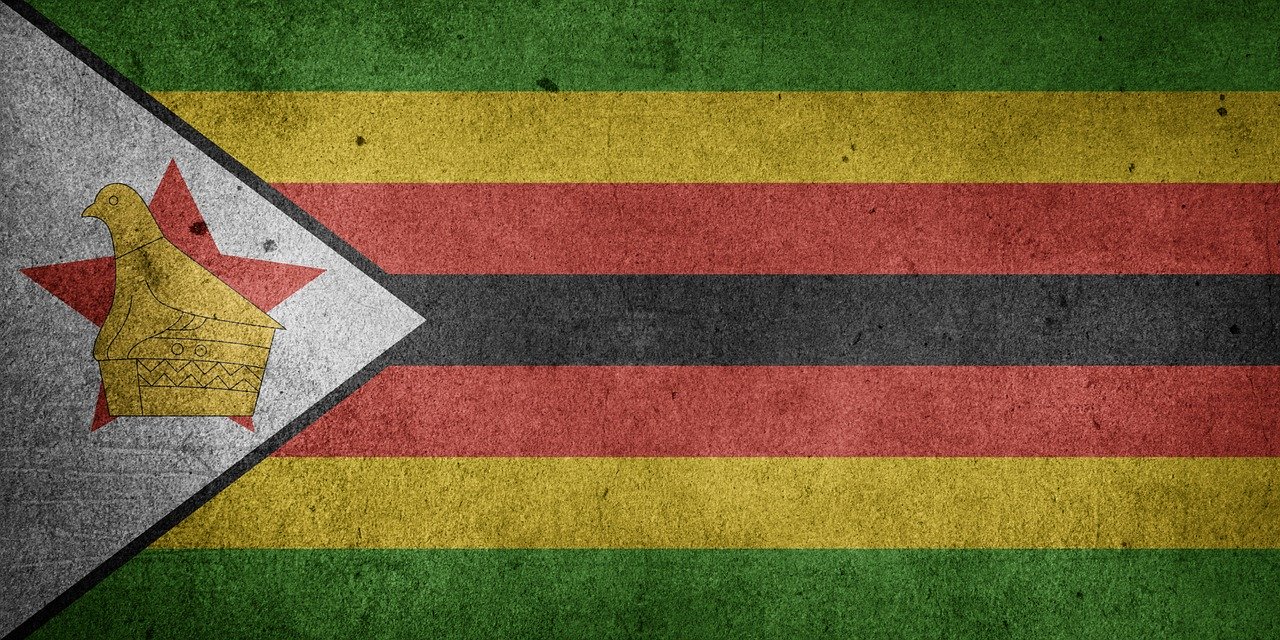 “They thought I had fallen into the hands of scammers; they thought I was being scammed,” Tendai Tomu, author of Libra in Africa, told me when I asked him what his family’s reaction was to his blockchain and cryptocurrency space ventures.

The chuckle in his voice was unmistakable when he responded, his tone laced with the kind of amusement that comes when you’re looking back after having come a long way.

That’s relatable, ain’t it? We’ve all been warned off from dipping our toes into the cesspool of “magical Internet money.” We’ve all been told that it’s a bubble. And worse, we’ve all been chastised about getting involved in something that is the refuge of drug traffickers, terrorists, money launderers, and war profiteers.

For Tendai, this, and the journey that came after, was tougher than those embarked on by most.

The young entrepreneur is from a world that is not really known for its financial literacy, and by extension, crypto-education and crypto-literacy.

“My family still doesn’t understand cryptocurrencies,” Tendai, a resident of Harare, Zimbabwe, told me, adding that while he does take a lot of time explaining the concept to them, it remains a difficult task. Such an exercise is doubly hard in a country with a financial literacy rate of just 41%, despite a general literacy rate ranking close to 90%.

Financial literacy usually entails a higher degree of crypto-awareness. However, there is a catch here as people who are financially literate are apparently “82% less likely to own cryptocurrencies,” while 40% more likely to never own any in the future. Sort of a catch-22, eh?

The question arises – How, despite low financial literacy rates, does Zimbabwe manage to record such steady P2P Bitcoin trade volumes? Well, the answer perhaps lies in the country’s history.

Something’s rotten in the state of Zimbabwe

Zimbabwe has been in the news over the years for a host of reasons, not all of them good. Perhaps, the most infamous one was the Zimbabwean economy’s struggle to rein in hyperinflation in 2008. I mean, how can anyone forget the iconic and stirring image of a kid carrying bucketloads of cash to go to the grocery store? 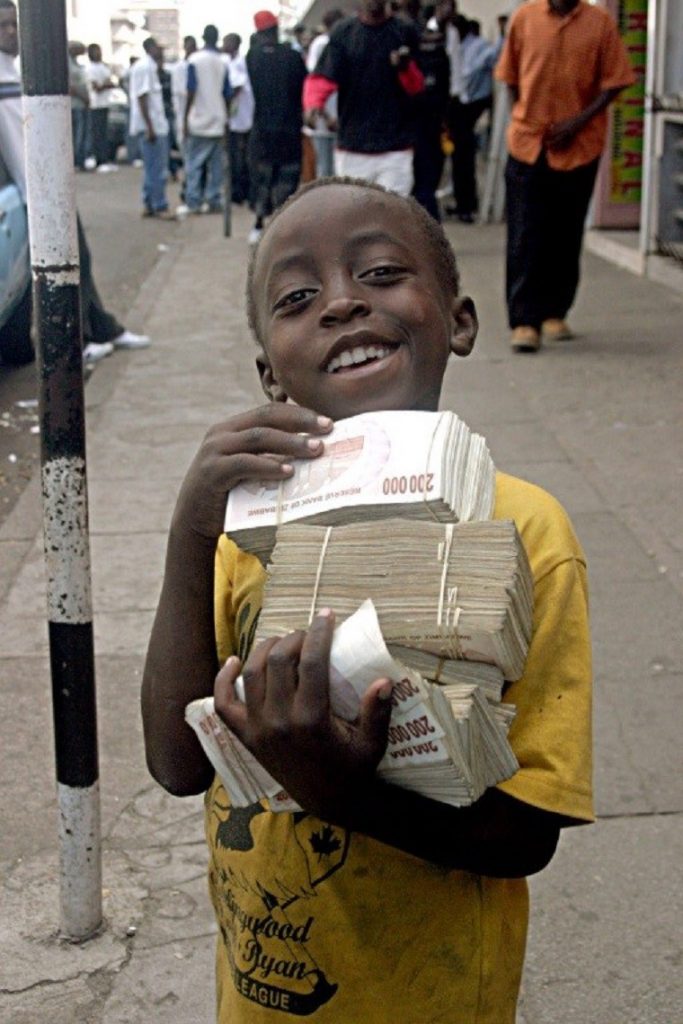 This phase in the country’s economy, coupled with Governor Gideon Gono’s predilection to issue and print new banknotes for everything (More than 23 new bills were introduced within a space of 7 years), contributed to the local populace losing faith in the country’s fiat money – The Zimbabwean Dollar. Tendai Tomu was one of them, thinking to himself, “We have hit rock bottom.”

However, the young banker learned something from distributing fresh-off-the press banknotes to meet increasing demand. In a blog post titled “10 Things I Learnt While Living in a Hyper-inflationary Country,” he wrote,

“Never put your eggs in one basket — This ancient saying proved true as people lost their life long savings as banks and insurance firms collapsed. Money kept in bank accounts lost value as inflation rose and even those who kept foreign accounts with the banks lost their monies when the central bank resorted to raiding those accounts for forex!”

Never put all your eggs in one basket. That is sound advice, especially for residents of a country rife with hyperinflation. And while many outsiders advise these residents to invest in something like the U.S Dollar, the world’s reserve currency, Zimbabweans have it harder since the govt. outlawed the use of any foreign currency for local trading in an attempt to prop up the already-discredited fiat currency.

This is where Bitcoin and cryptocurrencies come in as several research studies have conclusively proven that monetary and financial restrictions, falling trust in local currencies, and a hyperinflated economy are all conducive to alternative currencies, including Bitcoin, and by extension, other cryptocurrencies.

Further, it’s not like cryptocurrencies gained prominence in the country only recently. The popularity of Bitcoin, and by extension, cryptocurrencies, was at its peak in 2017, when Bitcoin hit its ATH. In fact, not only did Zimbabwe have Blockchain Association offices in Harare and Bulawayo, but it also had native crypto-exchanges.

Alas, most of these groups were either dispensed with or driven underground soon enough by the central bank’s ban on transacting cryptocurrencies. It was a tough time, Tendai told me wistfully, with many of these groups forced to move to platforms like WhatsApp and Telegram to do their business.

This is still the case, he added, claiming that while the Zimbabwean government is “warming up to the idea” by presenting a proposal for a crypto-regulatory sandbox amid possible plans to launch a gold-backed digital currency, its public position remains unchanged.

However, Tendai, like many others in the country’s crypto-community, remains optimistic. “I think I can see the light at the end of the tunnel,” he told me.

Crypto-literacy in the face of sanctions

I for one think that’s pretty heartening, especially in light of the fact that like myself, Tendai works in a country where few people know anything about cryptocurrencies. And that’s a big problem, he admitted, especially when it comes to introducing oneself.

“I just tell people I work with digital currencies because here in Zimbabwe, we have EcoCash, one of the country’s centralized payment systems.”

People in Zimbabwe know digital currencies. They know centralized payment systems. They just don’t know cryptocurrencies, which is why whenever the former banker has tried to introduce himself as someone who deals with cryptocurrencies, he has gotten the same looks quack doctors get on street corners. Would this happen in the West? Probably not.

Consider the United States of America. Most people may not hold any investments in cryptocurrencies, but with every passing day, a growing number are actually getting to know about these asset classes. How? Well, there are a few ways – a) Mainstream coverage like when President Trump tweeted that he was “not a fan” and b) Pop culture, whether it is Alicia Florrick trying to trace Satoshi Nakamoto on The Good Wife or Leonard and Sheldon trying to find their old Bitcoin wallet.

Western civilization, today, has the luxury of being a more hospitable place for crypto-enthusiasts. Don’t understand cryptocurrencies? Go attend a crypto-event or a blockchain conference. Need to invest in crypto? Reach out to any of the growing numbers of investment managers. Need to know at what price Bitcoin is trading at right now? Log on to the Internet and check out TradingView.

The disparity in the levels of crypto-education in the West and the third world, the sheer starkness of it, can easily be summed up by how difficult it is for many in the latter to even access basic Internet services.

Consider the case of Zimbabwe – According to a report by Freedom House, over the past few years, an economic crisis and high inflation have negatively affected the affordability of Internet services. Even when people can afford it, access to it is restricted by a not crypto-friendly government that hasn’t mellowed down on wanting to clamp down on what it calls ‘criminal behavior.’ In such a situation, how can one apply the same standards and expectations of crypto-literacy that are prevalent across the Atlantic?

Alas, sadly, that’s not all. He added,

“In most cases, the moment you tell people you’re from Zimbabwe, you are a risk. Some people might not want to work together owing to the threat of sanctions.”

That, honestly, is terrifying.

A Bitcoin journey at stake

Life in countries such as Zimbabwe isn’t easy, which is why, as Tendai Tomu put it, “you have to hold on to multiple side jobs all at once.”

That’s true, and not just in Zimbabwe. Check out the case of SatoshiCenter’s Alaknani Itireleng, who in a recent documentary, “Banking on Africa,” reminisced of the time when she sold her Bitcoin in 2017 to buy a car and poultry to open a farm, a “Bitcoin Farm,” in Botswana, adding that she needs it to be “able to sustain myself.” When asked what she wants to do, she responded tellingly that she wants to “continue my journey in Bitcoin.”

During our interview, I asked Tendai where he saw himself in 5 years. While he did say that he would like to be richer (who wouldn’t), the more poignant, optimistic answer he gave me was that his dream is to be more involved in the blockchain and crypto-space.

Both Tendai and Alaknani’s answers share the same spirit, but their dreams for what lies ahead and their work in the space will remain a side job if the aforementioned barriers to adoption aren’t removed quickly.

“I answer questions, I answer all of them,” Tendai told me, referring to his Facebook page where he is met by a barrage of crypto and blockchain-related questions on a daily basis. While some of these questions are very basic in nature, others are more complex and reveal a growing need among the population to understand what cryptocurrencies are.

Sometimes, this includes engaging with the wrong kind of people, especially trolls who have no understanding of how cryptocurrencies operate.

“I was once talking to this guy online who called Bitcoin a bubble. This was way back in 2018. He said that Bitcoin will fall to zero. Two years later, I got in touch with him again to tell him that Bitcoin is back over $10k. Do you still think Bitcoin is a bubble, I asked him.”

Tendai’s efforts to educate people about Bitcoin and cryptocurrencies and blockchain aren’t limited to the dozens of people who spam him on Facebook, however. As a former banking professional, he has also taken upon himself the duty to enlighten his former colleagues about the utilities of crypto. “While some are curious and ask questions, others still seem to dismiss it as a scam,” he said.

Have his efforts affected his relationship with these people, I asked him. “No,” he replied, adding that while they still get along, he gets some degree of revenge by challenging them on Nike’s Running app.

While Tendai is just one man, his and the efforts of others like him towards the cause of crypto-education and crypto-literacy are evident in how popular Bitcoin today is in Zimbabwe.

Check out the case of Golix, a Zimbabwe-based crypto-exchange that operated for a long while in direct defiance of the government and central bank’s orders. In fact, back in 2017, execs had claimed that the exchange was pulling in $20M in volumes across over 50,000 accounts.

Later, when the crackdown on exchanges started, Zimbabweans turned to do transfers on a peer-to-peer basis via WhatsApp and Telegram. The informality associated with the methods Zimbabweans use is part of the reason why experts are unable to work out exact figures and numbers for the country’s P2P volumes, despite the fact that they are confident it’s growing. Cause for optimism, perhaps?

However, growing awareness and clandestine adoption won’t work alone. The government should take the next step soon, and merely recognizing the need for a regulatory sandbox won’t cut it.

Caution and care, therefore, are of the utmost importance now. As Tendai Tomu says, “life won’t give you any do-overs.” I, for one, would listen to his advice. After all, one of his biggest regrets is losing the laptop he once used to mine Bitcoin. That, and the fact that he chooses to support Manchester United (Okay, he didn’t say that, but I know he’s regretting it).