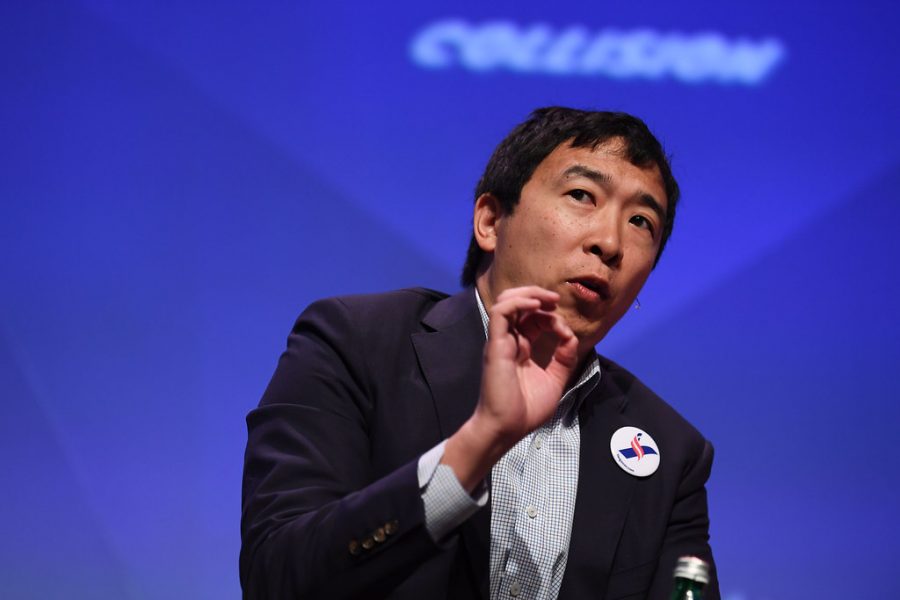 The founder of Venture for America, and US Presidential hopeful, Andrew Yang, has not only been making the rounds in mainstream news, but also the headlines of crypto-news outlets. Lauded as the most ‘pro-crypto,’ candidate among the current field of Democratic front-runners to challenge President Trump in 2020, Yang is making his love within the cryptocurrency community quite known.

In a bid to fortify his position in more than your ‘official campaigning platforms,’ Yang, unlike his contemporaries, is venturing into the lore of the Internet to reach out to his base. Making his presence known with the younger generation, the ‘squad leader of the Yang Gang,’ appeared in the recent Off the Pill podcast, on the nigahiga channel, boasting over 21 million subscribers.

While talking, quite bluntly, about a range of different topics, Yang veered the way of the “Democracy Dollar,” a campaign promise, in addition to his flagship “Freedom Dividend,” which aims to stop the ‘mega donors from flooding our democracy.’  According to Yang 2020, this system would provide each American with “publicly funded vouchers,” worth $100 which citizens can choose to “donate to politicians.”

On asked by Michelle Phan, one of the hosts of the podcast if this system would be run on the US dollar, Yang suggested that it does not necessarily have to be a fiat-based approach, it can even be based on a “coupon code,” or a voucher-like system. Yang, whose campaign, accepts Bitcoin, typical of the folk trying not to undermine regulation while being mindful of innovative technology, played the “Blockchain, not Bitcoin,” card,

“I have many friends in the cryptocurrency community and I’m a believer in the underlying technology in particular, the Blockchain has a world of potential.”

Yang, however, lamented over the fact that cryptocurrency and blockchain technology “hype,” has been “overblown and ahead of itself,” despite being so “powerful.”

On being pressed further if UBI [Universal Basic Income] could essentially be UBI [Universal Bitcoin Income], in that his Freedom Dividend could be based on a “real asset,” like Bitcoin being fractioned out into SATS and disseminated to the public, Yang, once again, deflected. Despite stating that he appreciated the line of thought, he underplayed the question,

Earlier in his campaign, Yang stated that, if elected, he would implement a mobile voting system, based on the blockchain, calling the age-old physical booth-based voting process “ridiculous.” He added that a blockchain based voting system would “revolutionize true democracy,” and increase “participation,” in the election process. In April, Yang, called for clarity on investment in Bitcoin both at the individual and the corporate level.