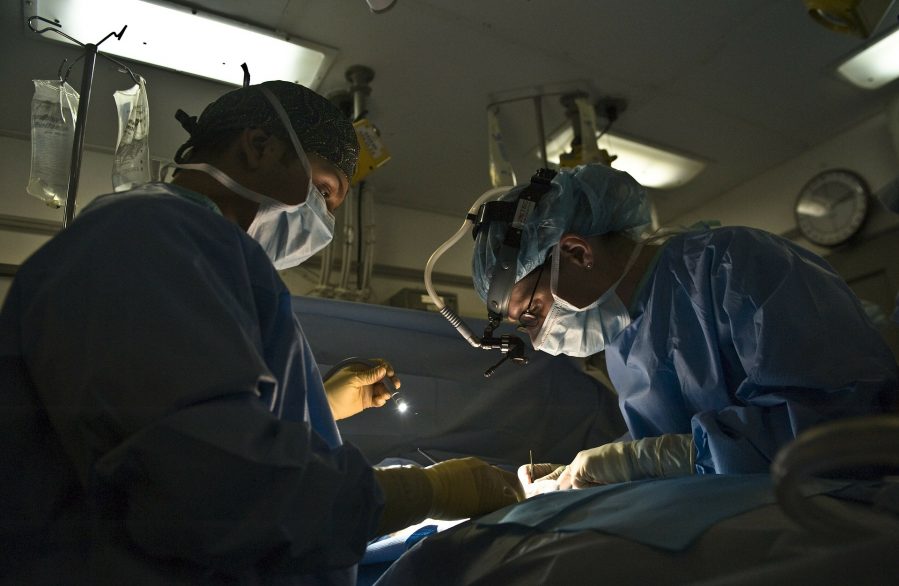 With Bitcoin hovering around the $7,200 level, it should be noted that its journey thus far has transitioned from being cautiously optimistic to a roller-coaster ride. The future, however, looks to be stuck in limbo until Bitcoin makes its next move. 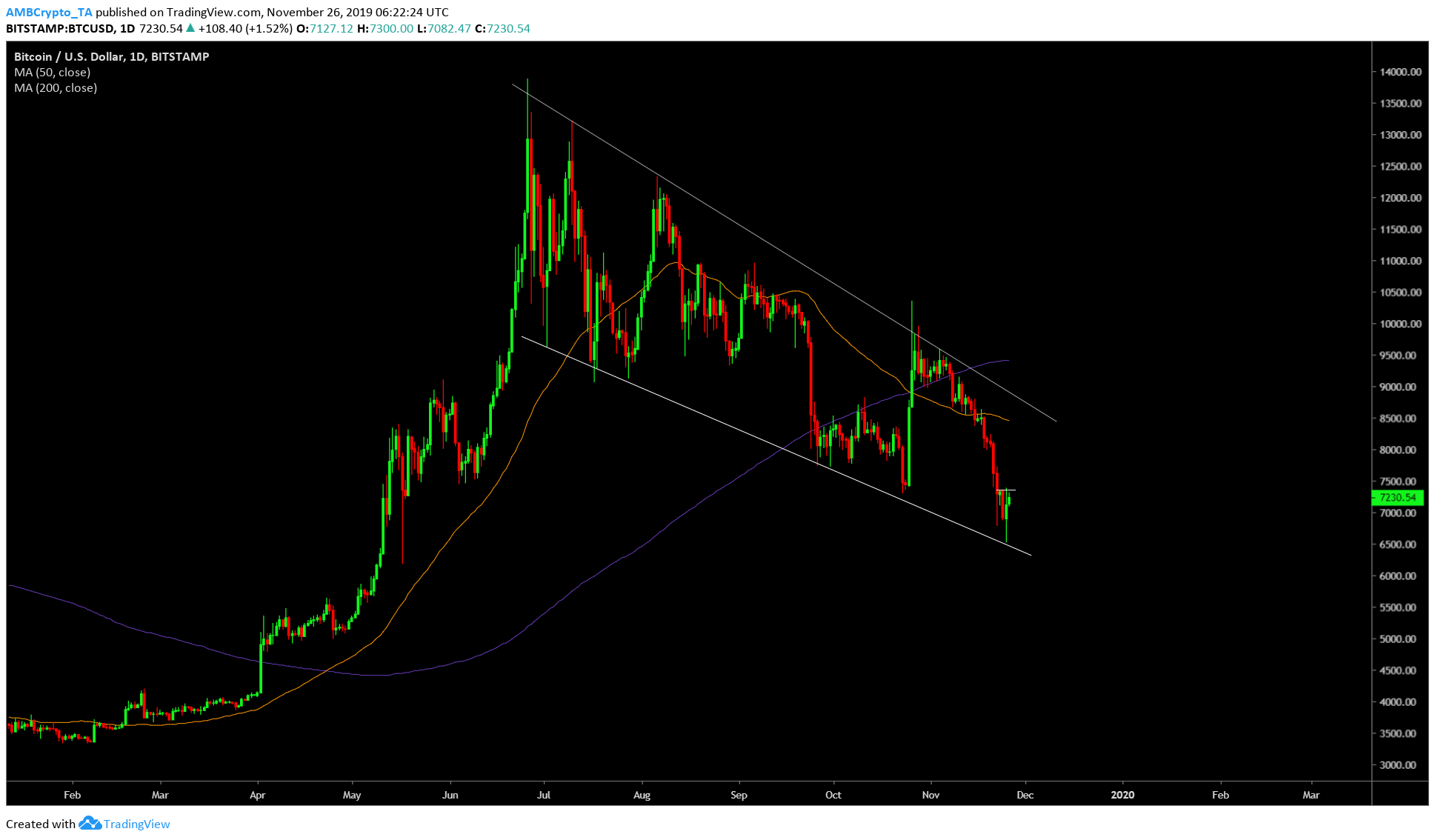 In terms of price, BTC has slowed down since its volatility is moving sideways. Multiple indicators are not exhibiting any dichotomy for Bitcoin, or any clear bias. On one hand, the price is consolidating in a falling wedge pattern, indicating a bullish bias. On the other hand, the simple moving averages [SMA] are indicating huge bearish bias.

Will bulls overcome the bearish sentiment and triumph?

Will the bears knock the bulls down to the ground?

Dissecting one of these scenarios will help opine on what to expect for Bitcoin.

The bearish scenario that is looming over Bitcoin is the ‘Death Cross.’ Death Cross is when the 50-day SMA crosses below the 200-day SMA. Infamously, this indicator lit up before major economic downturns in 1929, 1938, 1974, and 2008. It is also important to note that there were times when the death cross appeared, but proved to be a false indicator.

With the data available for Bitcoin dating back to January 2012, this indicator has flashed six times and it is clearly depicted in the chart above.

So, what’s so special about this?

The first major bull run in 2013 pushed the price of Bitcoin to the $1,100 territory, following which there was a bust cycle. During the bust cycle, the death cross was formed on 9 April 2014. The bulls tried to take BTC back from the bears, but failed. This caused an ephemeral golden cross, followed by another death cross, which was the nail in the bulls’ coffin. This bear cycle lasted for more than 300 days, following which another golden cross was seen. Like the fate of the previous golden cross, this one failed as well, and was immediately followed by another death cross.

The bulls finally snatched BTC from the bears, forming another golden cross in early 2016, a development that led to another euphoric bull run which pushed the price exponentially. This was the 2017 bull run. The 2018 bear cycle was brutal, if not more excruciating, than the 2014/2015 bear cycle. 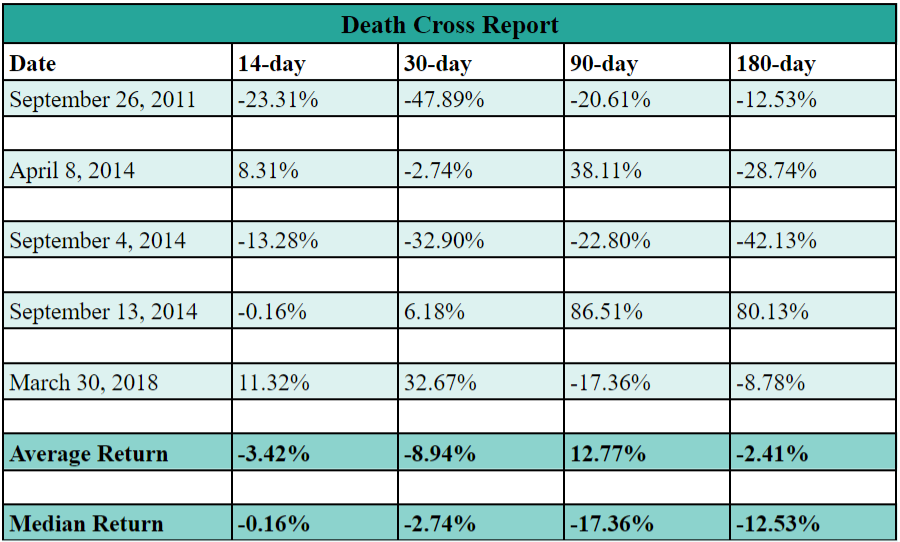 Although the death cross is supposedly a bearish indicator, from the above data, it can be inferred that the returns are rather mixed and do not represent a common deviation.

Speaking to AMBCrypto, Scott Melker, a trader at Texas West Capital and a DJ, opined on the Death Cross, stating,

“I don’t give much consideration to golden and death crosses. I find them to be lagging indicators, especially on higher time frames – a result of past price action, not a predictor of what price will do in the future.”

With respect to the current death cross, formed on 25 October, the price has surged by 18.5% over 14 days, and dropped by -7% over the last 30 days. Although the price has collapsed by a huge amount in the last few days, more data is required to suggest the next course of action. Looking at the technicals, the bounce is just a pitstop for the bears.

True as Scott Melker may be, moving averages are usually lagging indicators and do not give a real-time reflection of the price. The death cross has been a differentiating factor that, in a vague sense, separates bull cycles from bear cycles. For example, the April 2014 death cross lasted for 560+ days, indicating a long-lasting bust cycle.

The 2018 death cross was also followed by a bear cycle that lasted 388 days, until the golden cross appeared on 23 April 2019. Since April 2019, the supposed bull run was in full force for 185 days; after which, a death cross manifested itself and has been looming over Bitcoin for more than 20 days.

The bearish case for Bitcoin could prove that April 2019’s golden cross was a fake-out, one very similar to the July 2015 golden cross. The 2015 ‘fake golden cross’ was proceeded by a death cross, which pushed Bitcoin close to its previous bottom.

As mentioned above, the bearish case for Bitcoin seems likely and Bitcoin could mirror a similar move from the past, more precisely, the move could be from 2015.

If that were to be the case, are you prepared to stack more sats?