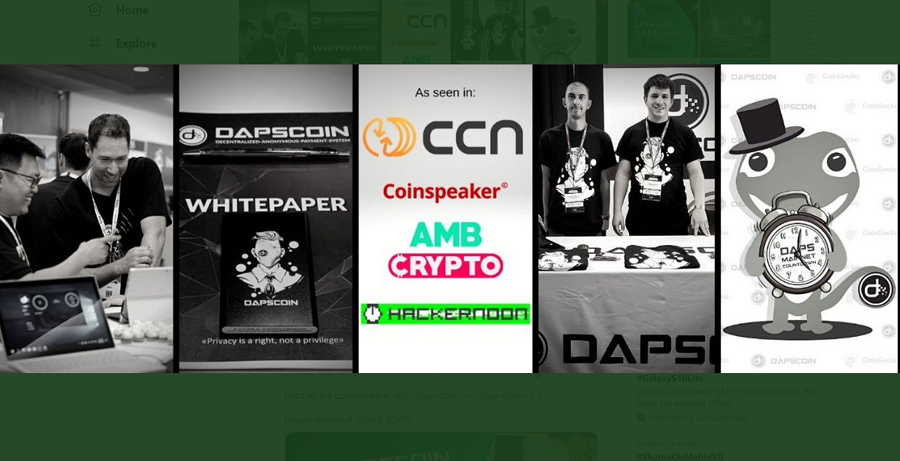 Privacy is a right, not a privilege. This idea more or less forms the basis of the crypto space.  Privacy coins like Monero and ZCash are doing their bit to keep up with the concept. Decentralized Anonymous Payment System (DAPS), a new addition to space seems to be a tough competition for the two coins.

DAPS is a privacy blockchain, which provides enhanced security, scalability along with total privacy. DAPS protocol creates a fully anonymous staking coin and payment system with a Trustless governance structure, based upon the latest technologies derived from both Monero and PIVX. This is the first of its kind in the crypto industry.

Not all privacy currencies are fully private. In theory, in a completely anonymous chain, no matter the protocol, node owners can collude off-chain to run their nodes maliciously. This can be disastrous in many ways for any network and represents a built-in security risk to current iterations of private blockchains. If nodes were to collude, generate infinite coins for themselves in secret, and spend them, the world would be unable to discover this as the transactions and balances will be hidden from public view.

Traditional blockchains are often exposed to analytics and malicious attack vectors. Many around the world use these exposed data to exploit cryptocurrency users. This is where DAPS comes into the picture. It aims to preserve everyone’s right to control their finances as they see fit. DAPS researched and built the most private blockchain to date merging successful and tested privacy protocols. DAPS also had a code security audit done by Red4Sec before launching their mainnet to ensure a secure chain and a key thing to note is that DAPS is not vulnerable to well poisoning, long-distance attacks or any other currently known chain attack Vector.

DAPS chain verification and consensus models are based upon PoS nodes (staking and Masternodes) and PoA miners. With carefully selected and tested protocols, it provides a fully private blockchain network. It offers a complete anonymity package in any protocol to date, with an on-chain solution to the trust problem and this unique solution is referred to as Proof-of-Audit, which by the way is the keystone to their protocol.

How does DAPS address the trust problem

DAPS employs something called the HARPOCRATES; Protocol and this sets out to be a new industry standard. Utilizing the following key technologies, DAPS achieves complete obfuscation of all users and transactions. This mix of features, featuring Proof-of-Audit creates a completely Trustless anonymous blockchain network.

Unlike Monero, DAPS platform has varying ring sizes and is better than traditional platforms like Komodo, where privacy is optional. There is also no halving like Grin and ByteCoin and fees are kept at a minimum in a fully Trustless system.

The following information is kept private in DAPS system:

DAPS also uses a dual key system to provide stealth addresses to obfuscate addresses. A public address is derived from a private view-spend key pair. A public address can contain optionally payment ID, which is usually used by exchanges.

DAPS is a hybrid PoW-PoS-PoA (Proof-of-Audit) blockchain system that focuses on the privacy of the user. It means that even though all user transactions are fully published to the blockchain, no third-parties (except the sender and the receiver of the transaction) can reveal the detailed information within the transaction. DAPS mainnet has been running successfully since the end of September 2019 and the project is doing well with continuous upgrades and expansion of their ecosystem.

Unique Preparedness and Blockchain Conference “Off Chain” Returns to Utah