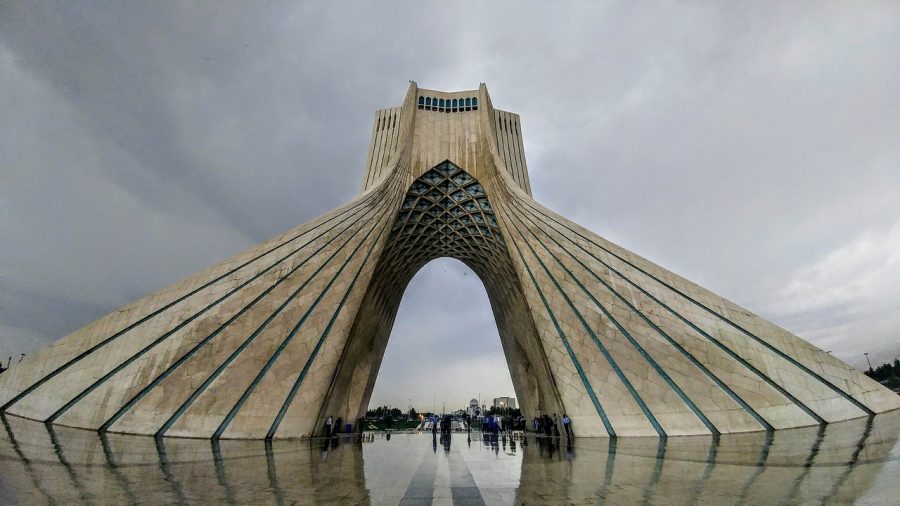 Iran has been at the cornerstone of U.S foreign policy ever since the Ayatollah Ruhollah Khomeini-led revolution deposed the US-favored Shah of Iran way back in 1979. Sanctions have been crucial to this effort, with the United States using its economic muscle and superpower credential to impose often-crippling sanctions on the West Asian country. The recent round of sanctions by the Donald Trump-led administration is thus just the latest salvo in the frosty relationship between the two countries.

However, Iran may have an ace up its sleeve. Okay, maybe not an ace. Perhaps, not even a face card. However, if optimistic Iranian reports are to be believed, the Persian country may have a way to mitigate the crippling effects of the sanctions imposed against it: Cryptocurrencies.

Yet, this isn’t an approach the Islamic Republic has come to take gradually, over time. Instead, ever since the first cryptocurrency came to being, Iran has been very hostile towards the same. What then has contributed to the country welcoming even the idea of cryptocurrencies? Well, it’s largely owing to the fact that Iran is running out of mainstream options. The scope of sanctions imposed by the United States and the international community is the reason why.

However, this isn’t the first rodeo Iran has been in. In fact, the country has been the target of economic sanctions imposed by the United States in 1979, 1984, 1992, 1996, and 2010, with the US going as far as targeting countries and entities that traded or invested in Iran, especially in its petroleum sector. The latest round of sanctions imposed by President Donald Trump, soon after he announced the US would be withdrawing from the 2015 Nuclear Deal, is perhaps the strictest of these measures.

The effects of these sanctions have been far-reaching. The International Monetary Fund forecasts Iran’s GDP to contract by over 6% by the end of 2019, with the Islamic Republic’s GDP already down by over 3% this year. Inflation in the country has spiked too, with the rate surging from 9% in 2017 to 31% in 2018. Further, not only have the energy sector-targeted sanctions wiped out a significant percentage of Iran’s total oil output and exports, but the value of the Iranian Rial has also fallen by over 60% against the U.S Dollar.

All this while, common citizens of Iran have been devastated by economic woes, with costs surging through the roof. In fact, since the sanctions were reinstated, prices of vegetables, milk and poultry have risen by 47%, 37% and 57%, respectively. Further, according to a recent report, 17 out of 18 pension funds in Iran ‘are in the red,’ owing to the fact that 80% of the funds’ funding comes from the Iranian government.

However, the key objective behind American sanctions on Iran has been something more entirely. This was highlighted by Julie Myers Wood, CEO of Guidepost Solutions, who told AMBCrypto that,

“Sanctions are designed to squeeze pressure on countries in part by keeping them from participating in the global financial systems.”

A major reason behind American sanctions being successful in doing so is the fact that the United States has a huge influence on how the international banking system operates. The SWIFT network and the CHIPS system is a case in point, with a recent report pointing out how the US has broad control of both.

Banks based in the United States, while having several of its executives officiating SWIFT, exert an undue degree of control on the network, with the SWIFT system also having to make all its data available to the United States government. CHIPS, on the other hand, is overseen by the U.S authorities themselves, with the Federal Reserve at the apex of the settlement, correspondent system. By the use of sanctions, the United States prohibits any transaction involving Iran to pass through either of these systems and networks, while also pressuring them to refuse doing business with the country in the future.

These measures have particularly affected Iran’s capacity to export oil to countries such as China and India. And despite the fact that the United States has claimed that its sanctions don’t affect Iranians’ access to food and medicine, the tanking economy is dearly affecting the citizens’ financial ability to buy either of these.

Dr. Robert Mogielnicki, Resident Scholar at the Arab Gulf States Institute in Washington D.C, spoke to AMBCrypto about the effects these sanctions have been having, calling them “broadly successful.” He said,

“International firms remain wary of engaging in trade and investment initiatives with the Islamic Republic–owing to the threat of secondary sanctions.”

With the conventional financial solution closed to it by the sanctions imposed by the United States, it’s no wonder that the Islamic Republic is turning to digital currencies and cryptocurrencies to save it from falling deeper into the abyss. What is interesting to note here is the fact that Iran quickly went from being very anti-crypto, to being somewhat cordial with the industry in recent months.

Just recently, the country’s cabinet released a bill which legalized crypto-mining, albeit with a few caveats. Iran has also accepted cryptocurrencies to a certain extent, making it legal to hold cryptocurrencies for investment purposes if users accept the risks involved. However, it is illegal to use cryptocurrenices for trading purposes or as a method of payment and they are not viewed by Iran as legal tender. These steps come just months after Iran’s Central Bank had highlighted the dangers of money laundering and terrorism financing associated with cryptocurrencies.

In fact, Iran’s embrace of digital currencies goes farther than that. Reports suggest that the Islamic Republic is going ahead with plans to launch a gold-backed cryptocurrency that will be mined with the Central Bank of Iran’s permission. This will be mined by a small consortium of private Iranian companies and according to Shahab Javanmardi, CEO of FANAP, the new cryptocurrency will “ease optimal use of Iranian banks’ frozen resources.” This comes after unconfirmed reports suggested that Iran had already launched one, dubbed ‘PayMon.’

On the other hand, there are contrary reports that suggest that Iran’s native digital currency, dubbed the ‘Crypto-Rial,’ will not be gold-backed, but will instead be pegged to the country’s currency, Rial.

Will digital currencies be the messiah?

If there is any truth to any of these conflicting reports, this would be a huge step forward for the Persian country as it would be able to control its financial fate to some degree. In the words of Julie Myers Wood,

“A viable digital currency could be a game-changer for countries like Iran to wrestle some leverage back.”

The question thus arises, how successful will Iran’s new venture turn out to be? Will Iran’s embrace of digital currencies help evade the worst of these sanctions? Well, there’s no right or certain answer. According to Mogielnicki,

Speaking to AMBCrypto, Mogielnicki highlighted the case of INSTEX, a European Union-devised multilateral trading mechanism designed to circumvent U.S sanctions on Iran. INSTEX is meant to facilitate trade between EU countries and Iran without relying on the direct transfer of funds or the use of the US-dominated financial system. However, according to Mogielnicki, INSTEX has been a flop since its operational launch in June 2019.

Highlighting this failure, Mogielnicki told AMBCrypto that in the face of this European endeavour failing, the likelihood of an Iranian venture succeeding is even more remote. His intuition was backed by Julie Myers Wood, CEO of Guidepost Solutions, who when asked about the possible success of a cryptocurrency native to Iran and one backed by the Islamic Republic, told AMBCrypto,

“….given the broad frameworks for regulatory control developing around digital currency such as the FATF recommendations, it is unrealistic to think that Iran’s digital currency could fully evade sanction protocols.”

Iran, if it really goes ahead with the state-backed use of digital currencies and cryptocurrencies, will be using them as a gateway to the developed financial world. However, as David Gerard, author of the ‘Attack of the 50 foot Blockchain’ pointed out to AMBCrypto, “any new token won’t do this job unless you can exchange it for conventional currency – actual money.”

In fact, many believe that Iran’s latest venture, whatever it turns out to be called, will meet the same fate as Venezuela and President Maduro’s Petro, a cryptocurrency that was pegged to the country’s abundant oil reserves. In fact, even if the venture is meant to evade the effects of sanctions, the United States can just treat Iran’s PayMon or Crypto-Rial as it did Venezuela’s Petro. According to Julie Myers Wood,

In fact, as David Gerard pointed out, anyone trading Petros for USD would be liable for trouble from the U.S. The same arrangement could be made for Iran’s project.

If not Crypto-Rial, why not Bitcoin?

What of other cryptocurrencies then? Well, even if we predict the Islamic Republic suddenly becoming very cozy with cryptocurrencies such as Bitcoin and XRP, it may not offer a solution for the beleaguered country. Bitcoin for instance, is used by many small-businesses in the country, despite the fact that it is deemed illegal for trading purposes in the country. However, it would be impossible for it to be used for state-sponsored trade as the volumes alone would pose huge problems for Bitcoin’s scalability, while also not going unnoticed by U.S authorities.

Further, there is an argument that Iran would never encourage the wider acceptance and use of global cryptocurrencies as doing so would, in the words of Robert Mogielnicki, “provide new avenues for capital outflows–an outcome that Iran’s government would like to avoid.” Also, the fact that cryptocurrency mining, despite the fact that it has been recognized as an industry, in now placing an undue strain on the state-subsidized electricity supply isn’t holding it in good stead.

It is impossible to say anything more unless Iran, a traditionally secretive state, offers more details about its attempts to evade American sanctions. An effort to create its own digital currency and cryptocurrency is one such attempt. However, the success or failure of it is too close to call.

Most analysts speculate that these efforts will fail. The CEO of Guidepost Solutions is one of them, with Wood commenting that a viable digital currency would just increase the work of enforcement officials, while not eliminating the effect of sanctions on the Islamic Republic. That may be true. However, it can be argued that such predictions often discount the sheer resilience of the Persian country.

Iran has been the target of American sanctions for almost 40 years now. 40. Ordinarily, sanctions imposed by a superpower for such a long period of time would have spelt doom and folly for a country. However, Iran is no ordinary country. Notwithstanding the strict sanctions, and the hostile neighbourhood Iran finds itself in – Saudi Arabia and Israel, to name a few, the Persian country is still a regional superpower. It is better off than a lot of countries, including Venezuela, a country whose failure to successfully launch a state-backed cryptocurrency is now being compared to Iran’s own infant project.

Iranian Foreign Minister Mohammad Javad Zarif said it best when he claimed that Iran was capable of teaching other countries the art of evading sanctions. The confidence here is telling, as the Foreign Minister implies that Iran will always find a way. However, whether digital currencies and cryptocurrencies are that ‘way,’ is uncertain, and so is the success ratio of this ‘way.’ In the words of David Gerard, “it won’t be impossible, but it won’t be easy.”

BitTorrent to release beta version of BLive ahead of schedule