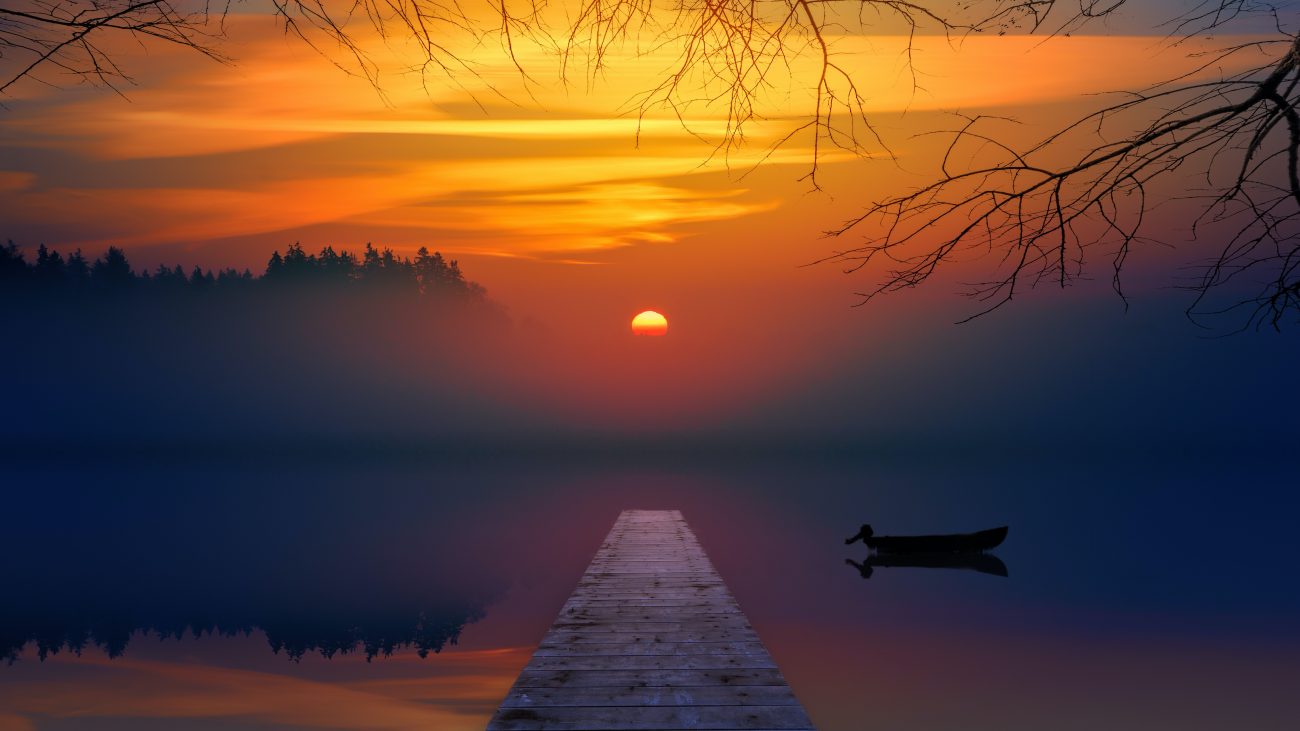 On a higher time frame [daily] Bitcoin’s price has formed a bearish pattern and indicated a price retracement to $8,000 and perhaps lower. It is the same on a lower, one-hour time frame. The formation of an up-channel indicated a bearish outlook for the price. The targets range from a 2% decline to 7.51%. 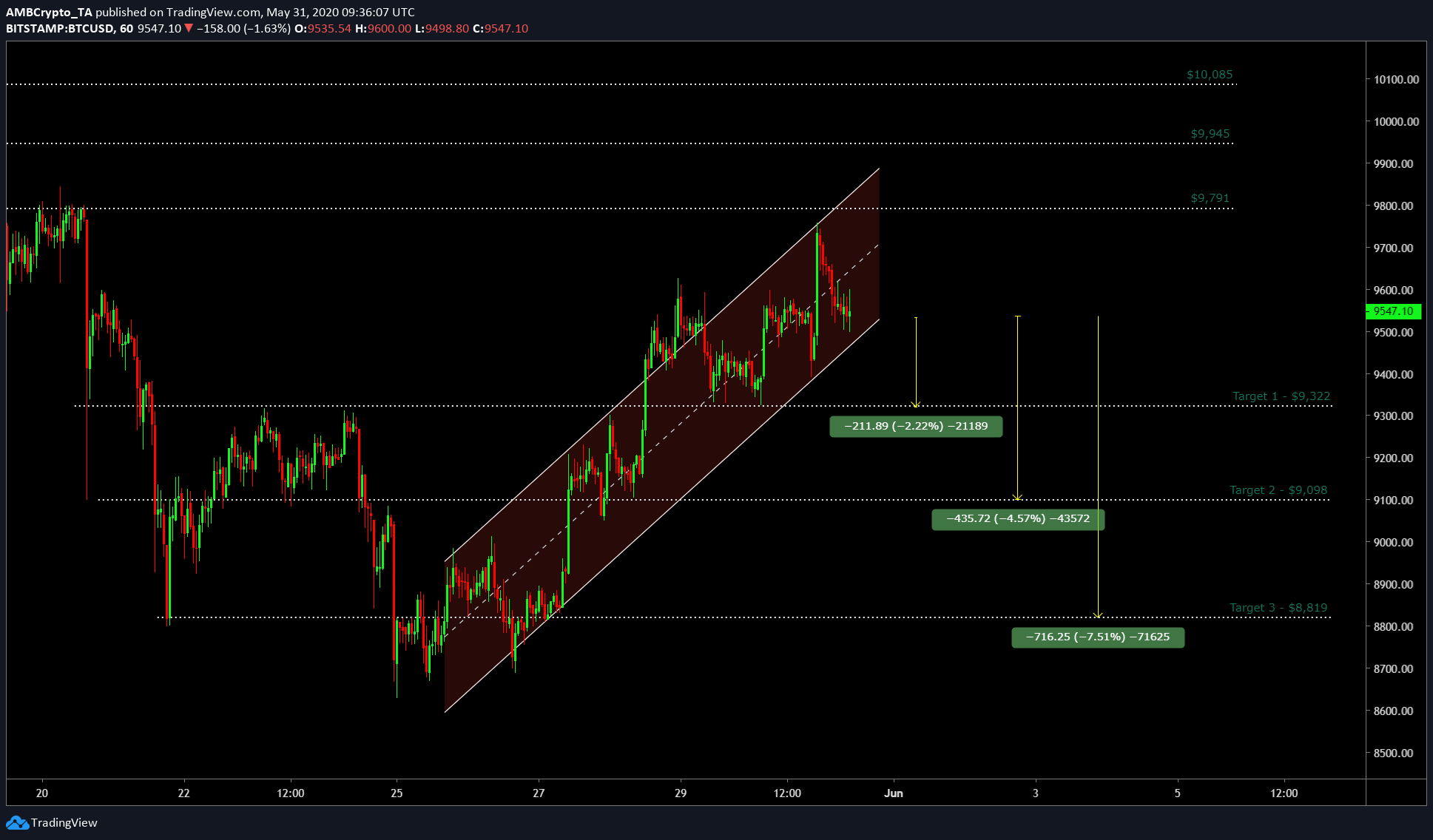 As seen above, the up-channel pattern extends from May 25 to the present day. Mid-way through the channel, the price tried breaching higher, however, it failed and returned to the channel. While the price struts slowly below the mid-line and towards the lower line, the chances of price breaking out are increasing.

Since the channel is up-sloping, the breakout will be downward. The possible targets for the coin include $9,322, marking a 2.2% decline from the current level. Following this, is a conservative and plausible target at $9,098 at a 4.57% drop from the current price level. Depending on how bearish the price action is at the point of breakout, the price could dip to the last target at $8,819. 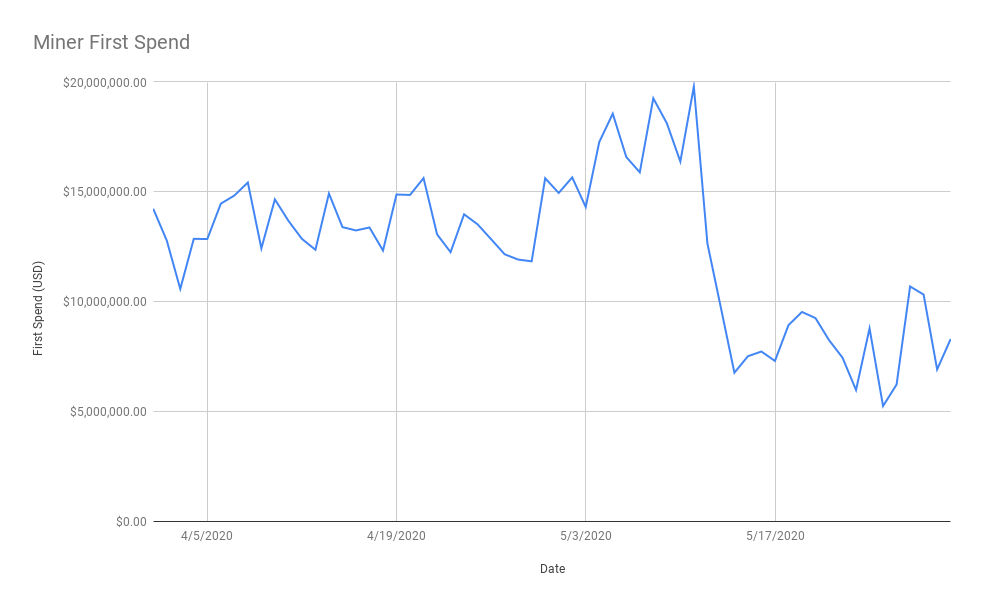 First spend is a metric that measures BTC moving out of miner wallets and gives a perspective about miner capitulation. From the above chart, it is clear that before the halving, the first spend was at around $15 million worth of BTC per day, however, it spiked as halving neared. On day of the halving, it hit $20 million and collapsed to $6.7 million. The spike and the eventual drop represents inefficient miners going out of business and miners that are breaking-even selling their reserves to keep mining.

With negative difficulty adjustments the miners that were breaking-even are now profitable and slightly inefficient miners are coming back again. Additionally, due to the start of the hydro season in China, the electricity costs are around $0.03(3) per kWh and hence, older mining rigs are now profitable.

The price looks bearish and hence, a drop to $8,000 or below on a longer time frame puts these miners in jeopardy.

Ethereum’s price rush may run out of steam