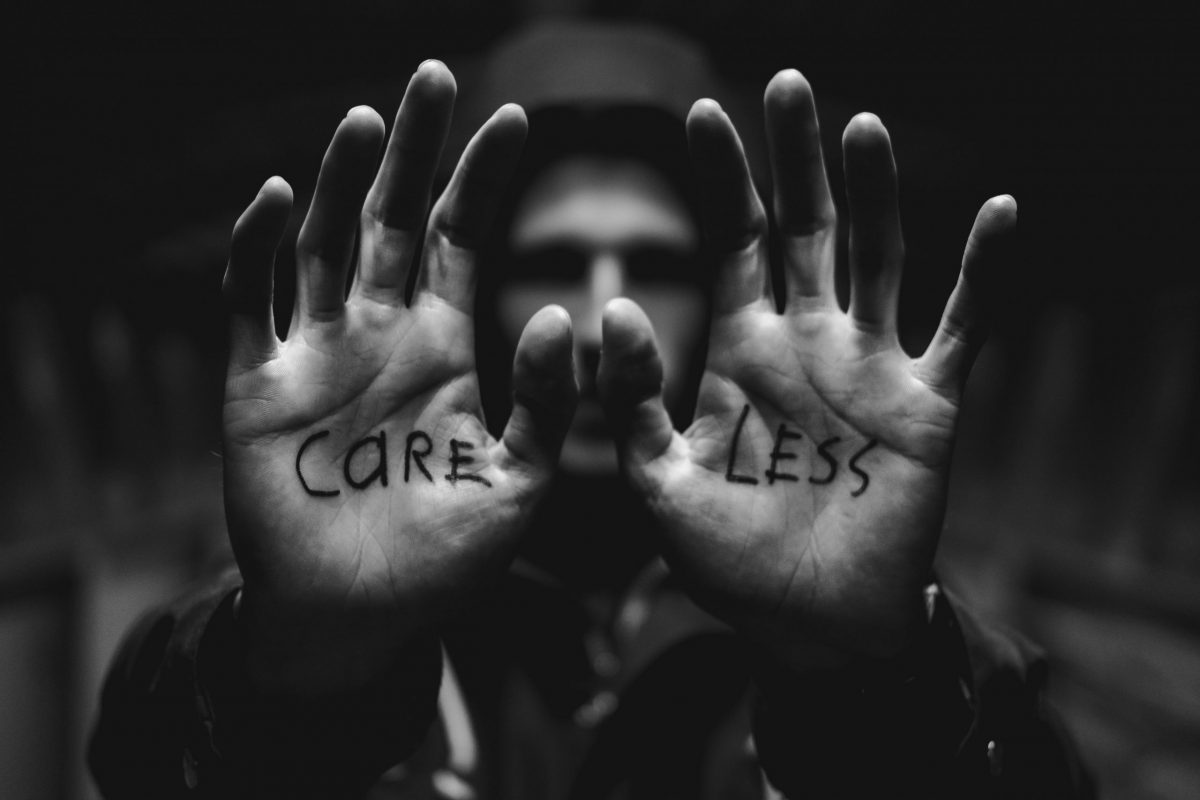 ‘Bitcoin’ and ‘Ponzi schemes,’ at one point were used interchangeably. When the cryptocurrency first started making waves early in the previous decade, all everyone could talk about was the price. Only a few years after Bitcoin was more than just a ‘pet project’ in a small cypherpunk circle, it skyrocketed to $1,000, giving its early adopters who bought the digital currency for double-digits a massive profit.

With high profits like these to early investors, it’s no wonder that traditional investors like Davide Serra,  David Gledhill and BIS’s Agustin Carstens labeled the nascent cryptocurrency a Ponzi scheme. It’s no wonder that during the cryptocurrency’s early years, it was called everything from a bubble to a scam. Despite time, the best litmus test of them all, proving many of its opponents wrong, the curse of the ‘Ponzi Scheme’ still lingers over Bitcoin.

Between July to December 2013, Bitcoin’s price rose from $75 to $1,150, a 1,430 percent increase. A steady drop in 2014 meant that by January 2015, the cryptocurrency was back down under $200. With a high and short period of return, followed by a steady drop, from a price point of view, Bitcoin was mimicking a Ponzi scheme.

On the PR front, things weren’t rosy either. Bitcoin was the first fully decentralized currency, created by a cypherpunk operating under a pseudonym who disappeared a few years after its launch, claimed to be against all forms of governments, and its only currency-like use was limited to the Silk Road, a darknet marketplace used to buy and sell illicit items like drugs, fake passports and stolen credit cards.

Then after being ignored for two years by the mainstream, it lobbed back into the limelight in 2017. With the price at under $900, the legitimacy of Bitcoin started to surface. Companies built on the structure of cryptocurrency and blockchain technology were launched, prominent investors were vouching for Bitcoin, and the case of crypto as an ‘asset class’ was being made with regular exchange-traded fund [ETFs] applications submitted to the SEC, without approval though. Then came the second run, and it’s fair to say it overshadowed the first.

Ponzi schemes have a life span of 1-count, meaning they can go on for one year, a few months, or even a few weeks. But they cannot have two runs at the same market, that’s not how a Ponzi scheme works. Yet, between January and December 2017, Bitcoin’s price rose from $800 to $19,800, a 2,375 percent increase, before dropping to $3,100 a year later.

Critics who labeled Bitcoin a ‘Ponzi scheme’ during the first run may have been correct in their assessment, but not so much the second time around. How does the saying go ‘Fool me once shame on you, fool me twice shame on me’ ?

With the price playing Ponzi scheme-like tricks for the second time in four years, opportunity for actual Ponzi schemes opened up. As Bitcoin soared and slumped so did every other cryptocurrency on the market, and when everything is going up, you don’t check what you’re buying, you just buy them all!

In such a bullish spree, coins began flooding the market. Many scheming businesses launched the crypto-market equivalent of an IPO, initial coin offerings [ICOs] and it’s fair to say that many of these ICOs weren’t the best. According to a report by Statis Group published in July 2018, the ICO market was valued at 20 percent of the United States IPO market.

Looking at all the ‘quality’ of ICOs from 2017 [many of which continued into 2018], the report from shocking results. The quality scale stretched from outright scams, at a pre-trade level, all the way to successful issuances, with exchange listing and trading. Of all the ICOs studied, 78 percent were “Identified Scams” 4 percent failed outright, 3 percent had gone dead, and only 15 percent were listed on exchanges, and less than 50 percent of the ‘listed’ ICOs were a success. It should be noted that many Ponzi schemes, which these ‘scam’ ICOs were were also exchange-listed and traded, so the buck does not stop there.

Needless to say, 2018 was not a good year for crypto. Bitcoin lost 80 percent of its value, as did many top coins in the market, and most ICOs under the hood turned out to be outright scams. But herein lied a ‘realization.’ As Bitcoin’s price fell in 2018, ICO projects raked up millions in fundraising. Bitcoin’s tag as a ‘Ponzi scheme’ was detaching from its price, and slowly getting stuck to other coin-projects which claim to be ‘associated’ with the king coin, but were entirely fraudulent, this at a time when there was a tirade against all crypto being a scam. This ‘realization’ from ‘Bitcoin is the scam’ to ‘Bitcoin and the scam’ came a full circle in 2019.

In 2019, the cryptocurrency market rose back up. While Q1 was quiet, in Q2 2019, Bitcoin rose from $4,000 to over $13,000, trading for over 4 months in five-figures. With the crypto-focus shifting to the launch of institutional platforms like Bakkt and Chinese regulation of crypto and crypto exchanges, the price took a dip and ended 2019, over 40 percent below its yearly-high [June 2019] but 110 percent up from January 2019.

As the price rose, and regulations strengthened, investors became wary of suspicious ICO projects. According to Longhash, a crypto-analytics firm, by September 2019, the ICO market experienced a “precipitous drop-off.” In December 2018, even with ICO projects well-and-truly under the scanner, over 50 ICO projects were active, this dropped to less than 10 by February 2019, and almost nothing in April.

One key finding from the study was the difference in ICOs, Longhash stated that “few projects that have managed ICOs in 2019 may be of higher quality, on average than 2018’s ICOs.” Median fundraising of 2019 ICOs was $6.8 million, while in 2018 it was just $131,000. ICOs went from high quantity-low quality to low quantity-high quality. The same can be said for Ponzi schemes.

In the entirety of 2019, revenue from crypto-scams totaled $4.3 billion, more than the figures of 2018 and 2019 combined, as per the 2020 state of Crypto-Crime report by Chainalysis. The major forms of scams that contributed to the sum were – investment scams, phishing, fake token sales, blackmail scams, fake mixers and Ponzi schemes.

Of the six scams, one type of scam alone contributed to 92 percent of the revenue – Ponzi schemes, hence the report labeled 2019 ‘the year of the Ponzi Scheme.’  Over $3.95 billion in cryptocurrencies in 2019 were siphoned by Ponzi scheme, and this sum was attributed to just six individual Ponzi schemes. 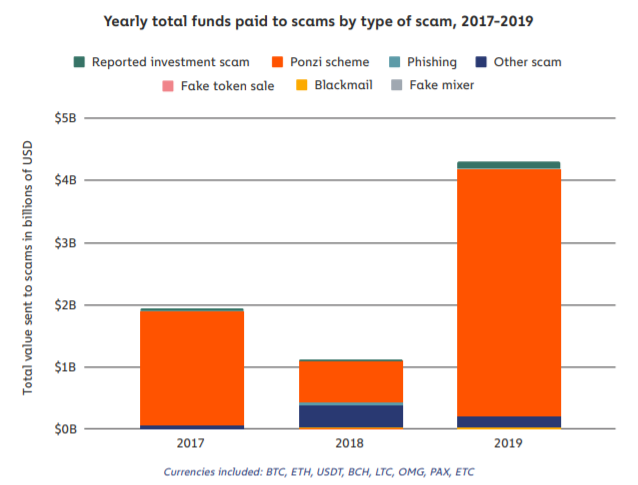 Speaking to AMBCrypto, John Jefferies, chief financial analyst at blockchain analytics firm CipherTrace stated that the reason for the uptick in Ponzi schemes is, in part, due to the ‘maturation’ of the cryptocurrency space. It’s not that crypto-hacks or other thefts have decreased in absolute terms, they’ve been overshadowed. Last year, over 12 exchanges were hacked, including Binance, with upwards of $170 million stolen. But this accounts for just 4.35 percent of what Ponzi schemes roped in, hence the difference is in size and scale.

While hacks are a matter of shocks to exchanges or individual wallet-holders, Ponzi schemes are latent. They slowly establish themselves in image and funding before making away, and here identification becomes key. Jefferies stated that exchanges have bettered their compliance models to “deter future crypto crimes by making it that much more difficult for criminals to get away with stolen funds.”

With the United States bucking up regulation following the 2017-18 ICO saga, Ponzi schemes have moved eastward, specifically targeting citizens in developing countries. The biggest crypto Ponzi schemes in years past – Onecoin, Bitconnect and PlusToken all have had a major ‘base’ in countries like China and India.

PlusToken was the biggest scam of the previous year, raking up $3 billion in revenue from primarily Chinese, South Korean and Japanese investors. As late as 24 June 2020, its stolen crypto is still being transferred between addresses. Bitconnect, had its roots not just in India’s ordinary investment-citizenry, but deep into central political parties as well, coinciding with the country’s 2016 demonetization policy which effectively made-null 80 percent of circulating hard currency. Onecoin and its spearhead Ruja Ignatova had, among other things, ties to the Russian mob, ‘Grand Ceremonies’ in China, and recruiters in India. From the hype for projects in the west to the hunger for profit in the east, cryptocurrency Ponzi schemes pivoted away after the ICO bubble-popped.

Jefferies stated that this was not a straightforward switch, but a combination of factors contributed to the switch:

The case of reserve currencies cannot be missed. Ponzi schemes are initially presented as an investment, and every investment works on the opportunity cost of money expressed in a country’s fiat currency. Tim Shaler, economist at iTrustCapital told AMBCrypto that the appeal of digital currencies as protection against “capital control,” and “future inflation” is also an advocate for investment, the lure of a higher-than-average return as promised by most Ponzi schemes is the final blow. “Their vulnerability makes them easier targets,” said Shaler.

Cryptocurrency-Ponzi schemes are not dead, they’ve modified. From low-value blatant frauds bombarding a bullish market to calculated schemes maneuvering a tempered market. While the number of schemes has decreased, the victims and the revenue have never been higher. As authorities continue to be concerned with regulation of Bitcoin, investors should be aware of what is and what isn’t a Ponzi scheme.

To make such a difficult assessment, the crypto-project by be looked at with careful detail. Jefferies suggested a few key areas to focus on prior to making an investment. Start with the whitepaper, and if there isn’t one, there’s your first red flag. Look at investment potential, measure it realistically. Vet the management through previous experience, companies and projects completed. Go through the compliance norms, audit requirements, license registration and overall-regulation of the company, and cross-check if its the same as your location, or from where you make the investment. Finally, make sure that the project is actually a coin project running on a blockchain, with real-world use.

While the above list is quite comprehensive, in short, be watchful, prudent, and never get ahead of yourself. To put it in simple terms, and words’ to live by, Shaler said,

“If an investment seems too good to be true, it probably is.”