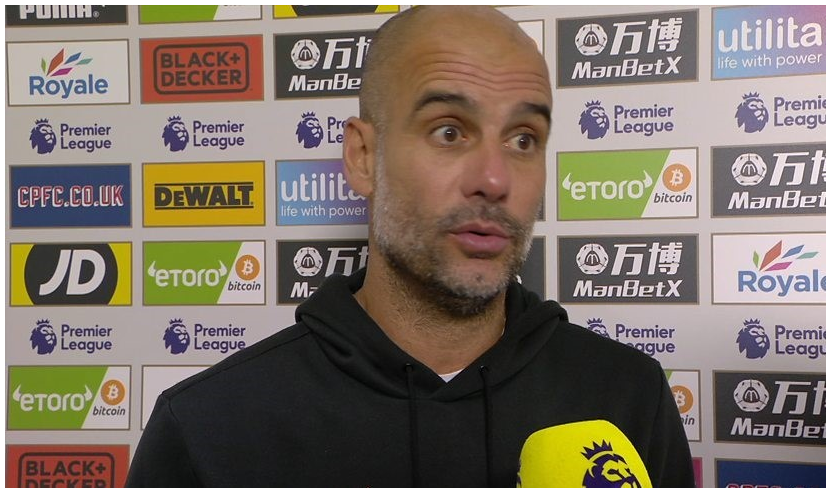 Premier League match-going fans will have to shell out £1.3 billion this season to follow their teams – as increases in the price of home tickets, TV subscriptions and merchandise hit their wallets.

As one of the biggest sponsors of the Premier League, eToro has been promoting their crypto offering through their six club partnerships this season. Currently, they are running promotions on matchday LED boards and media backdrops, helping raise awareness of cryptoassets to a global audience.

Key findings of the report include:

“Football needs to check itself. There are lots of positives about football. The stadiums are better, the quality of play is fantastic, and the atmosphere is far more inclusive, but for me affordability is something that needs to be addressed.”

“This report lays out the facts and I hope it will serve as a wake-up call. Football has to stand above other leisure businesses. It is more than just a game. It is about community and we need to ensure we are doing all we can not to price fans out of the game.”

Premier League match-going football fans are forecasted to spend an estimated £1.3billion throughout this season, a figure that has risen by 31% since 2014/15. Inflation, as indicated by the UK Consumer Price Index, rose by 8.4% over this period.

To better understand the real cost of fandom, the eToro Fan Financial Statement analyzed the spend of football’s most faithful supporters. The research focuses on the ‘dedicated fan’ – an adult fan who attends all 19 home games & travels to at least 5 away games. Dedicated fans will on average spend £1,888 this season. This equates to 8% of the average UK take-home salary according to the Office of National Statistics.

While ticket prices make up a significant proportion of this total cost, the overall cost of tickets for a ‘dedicated fan’ has risen only 1% since 2014/15. This demonstrates the positive impact of the Premier League wide cap on away ticket prices. It also reflects efforts by clubs to support dedicated fans including season ticket price freezes.

“The data shows that not all costs have risen equally and that the most significant increases are due to external factors outside of the clubs’ control such as travel, TV subscriptions and merchandise. This research also reveals  that it is not all doom and gloom for Premier League fans. Initiatives, such as the price cap on away game ticket prices means that the overall cost of tickets has risen only 1% since 2014/15, which is significantly below inflation.”

Arsenal is the most expensive team to support with dedicated fans each paying £2,238 per season. However, that cost has risen by just 2.4%, the least of any current Premier League club since 2014/15. Newcastle United are the only club outside of the traditional “top 6” to feature in the 6 most expensive clubs to follow.

This is largely due to the increase in season ticket and food and beverage prices, leading to a forecasted 4.1% increase in spend year-on-year and a 16.7% increase since 2014. Travel also plays a part. It should come as no surprise that this season Newcastle United fans will travel 68% more miles by train and 65% more miles by car to away matches, than the average Premier League fan.

Every club has a different offer when it comes to serving fans. The eToro Fan Financial Statement looked at whether some fans get better value for money than others by examining the total spend by dedicated fans last season about the number of goals scored and points won.

This approach reveals that whilst dedicated Liverpool fans may spend more versus other fans in the Premier League, they saw good ‘value for money’ based on a low cost per goal scored and points won, last season. Of all the clubs, Manchester City fans got the most entertainment for their money paying £16.90 per goal and £16.30 per point.

This was helped by having 12% less overall spend than the Premier League average and their top of the table finish. Huddersfield Town fans got the worst deal overall, spending £70 per goal and £96 per point a situation not helped by their bottom of the table finish and subsequent relegation.

“This isn’t just about money. It is about the family that lives a mile from the club dreaming every weekend that they can go to the game and afford to watch their heroes play. Every Saturday when I was growing up it was the only thing I thought about. It was the most important thing in my world. It fuelled my dreams for those 15 years until I joined United.”

“As a sponsor of six Premier League teams we try to ensure that we are giving back to the fans as much as possible. Our Le Tiss Air competition was well received by Southampton fans and this is just the first of many initiatives we will be carrying out this season to reward loyal fans who invest in what they love.”

“We understand that football fans have a deep emotional investment in their club and they’ll move mountains to support their team both home and away. We wanted to do something on behalf of the fans, to look at the hard costs involved in being a loyal fan and how that financial investment has changed over time. By doing so we hope to start a conversation about the future of football and how we can work together to bridge the gap between investment and value for the fans who are at the very heart of the game.” 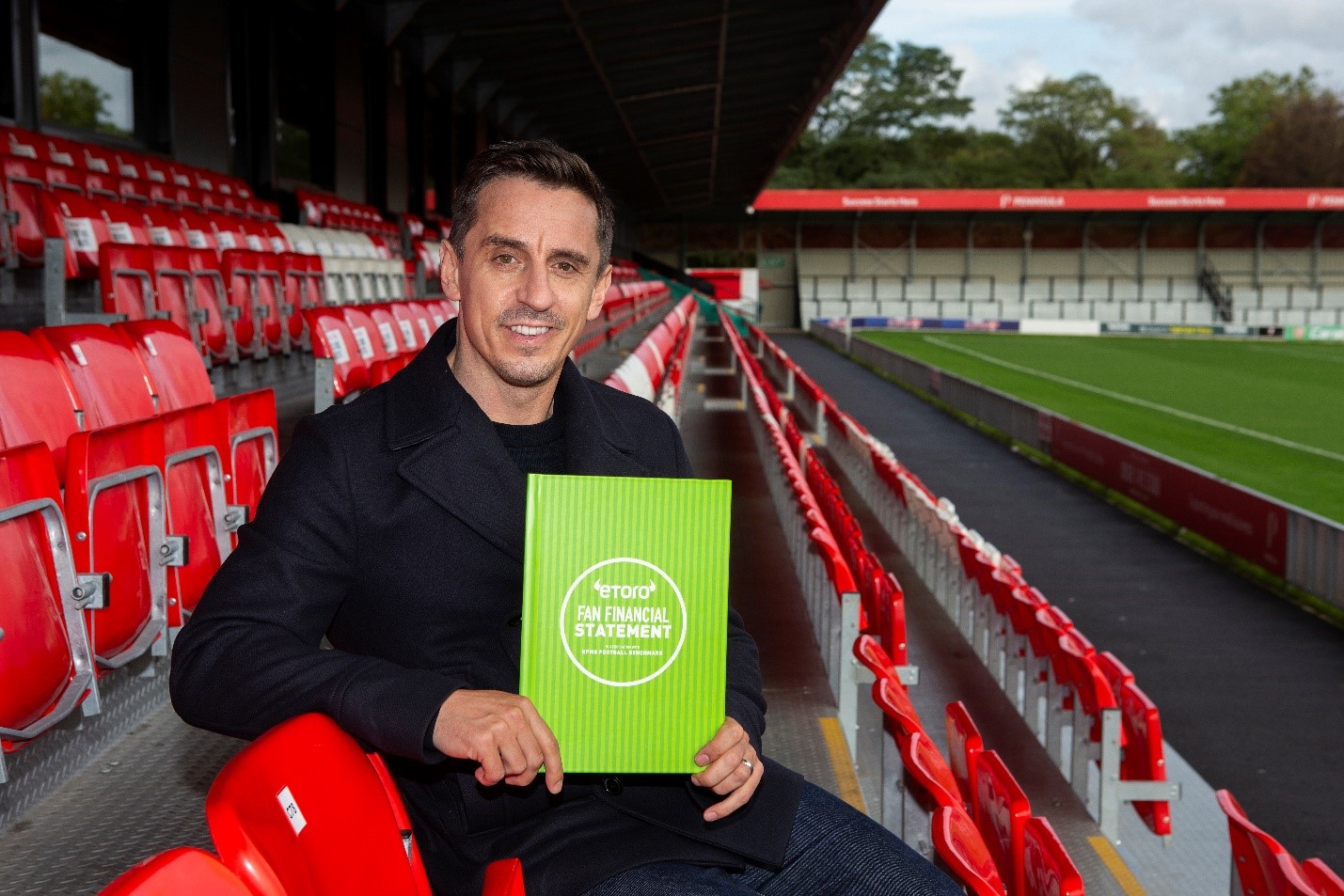 For further commentary by Gary Neville and to download the full report visit etoroFC.com

Note on KPMG methodology – data cited throughout this release is based on a profile titled ‘’the dedicated match-going football fan”. Data supporting this profile is based upon avid supporters who attend all home matches [as season ticket holders] and travel to approximately five away games each season.

With regard to travel behaviors, they are twice as likely to opt for a train instead of a car. All data and analysis have been provided by KPMG’s Football Benchmark team. When referring to ‘average fans’, these are fans who attend, on average, six to seven home games, accounting for casual ticket purchases and more committed season ticket holders alike. This is a theoretical profile aiming to capture the behavior of all fans as an average.

At the start of the football season, eToro announced its sponsorship of six Premier League teams including Aston Villa, Crystal Palace, Everton, Leicester City, Southampton, and Tottenham Hotspur. eToro was founded in 2007 with the vision of opening up global markets so that everyone can trade and invest simply and transparently.

The eToro platform enables people to invest in the assets they want, from stocks and commodities to crypto-assets. We are a global community of more than eleven million registered users who share their investment strategies, and anyone can follow the approaches of those who have been the most successful. Due to the simplicity of the platform users can easily buy, hold and sell assets, monitor their portfolio in real-time, and transact whenever they want.

In addition to the wealth of information and knowledge shared on the platform, KPMG’s dedicated Football Benchmark team deliver services to those operating, investing and governing the world of football, these services include Valuation and transaction support, Operational evaluation and restructuring, Feasibility & Business planning, Bidding assistance and economic impact assessment, Governance & organizational structure, as well as Audit & Tax.

Iqbal V. Gandham has almost 20 years of entrepreneurial and business strategy experience, and an in-depth understanding of how to accelerate growth in young, internet-enabled companies. He joined eToro, the global multi-asset investment platform, in 2016 as UK Managing Director, where he is responsible for developing new products and driving growth in the UK.

Previously he was CMO for Nutmeg, the world’s first online investment manager, where he helped take the business from an unknown brand to having over half a billion pounds in assets under management. Having originally trained as a spacecraft engineer, he’s held senior roles in India and the UK as both a technologist and marketer. Previous career achievements include co-founding India’s largest domain registration and web hosting provider Net4India and helping to take several technology start-ups through to successful listings.

Andrea Sartori is KPMG’s Global Head of Sports. Under his leadership, KPMG’s Sports Practice delivers value to support those making critical decisions in the sports sector, including investors and financial institutions, governing bodies and federations, as well as leagues, clubs and major events. His areas of expertise include business planning and feasibility studies of sports infrastructure, economic impact studies for major events and bidding assistance, valuation and transaction assistance, as well as growth strategies development for sporting federations, rights holders and sports corporations. Andrea is also the initiator and founder of KPMG’s Football Benchmark, a unique portal that provides in-depth understanding and interactive analysis of the business of football.

Gary Neville is one of the most decorated English and European footballers of all time, with 85 caps for England, the most of any right-back in history, and 400 appearances for Manchester United where he spent his entire professional career from 1992 to 2011 – including five years as club captain. Neville has 20 major football titles to his name, having lifted the Premier League trophy eight times, the FA Cup three times, the Champions League trophy twice, the Intercontinental Cup, two League Cups, and the FIFA Club World Cup.

He has represented England at three European Championships and two FIFA World Cups. Following his retirement from playing In 2011, Neville has made a successful transition into punditry with Sky Sports, whilst balancing multiple careers in coaching, as co-owner of Salford City and in a business where he manages several successful property enterprises and the recently launched University Academy 92. Neville has an in-depth understanding of all facets of the football, including the financial side where he can provide an expert and balanced view of the industry and the challenges facing fans, clubs, and the league.

Particulars of the exchange:

Please note that CFDs are complex instruments and come with a high risk of losing money rapidly due to leverage. 75% of retail investor accounts lose money when trading CFDs with this provider. You should consider whether you understand how CFDs work and whether you can afford to take the high risk of losing your money. Past performance is not an indication of future results.

Cryptoassets are volatile instruments that can fluctuate widely in a very short timeframe and therefore are not appropriate for all investors. Other than via CFDs, trading crypto assets is unregulated and therefore is not supervised by any EU regulatory framework.

eToro signals commitment to growth with acquisition of Delta