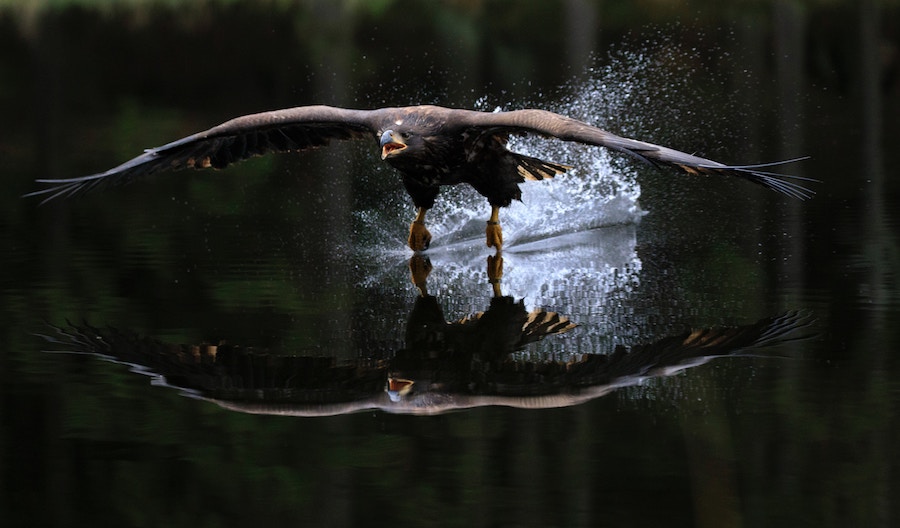 “People are angry that a young, black guy is raising money in this space and that I don’t have a kiss ass of Venture Capital firms or play by their rules to do it either,” said the aggravated James Edwards aka CryptoMedication to AMBCrypto. This statement came in hours after Olta Andoni explicitly stated that Ziliak Law LLC “does NOT represent Zerononcense and Cryptomedication” on her official Twitter handle.

A dive into the Crypto-Twitter/ Telegram melodrama

Four days after Peter McCormack tweeted that ProofofResearch Twitter handle was suspended “for threating to murder someone,” an Attorney at Ziliak Law LLC took to the social media to clarify that the firm had no association with Zerononcense, a crypto-research blog. This statement was put forth as the law firm was mentioned in one of the documents that were shared on Zerononcense Discussions Telegram channel. This was, however, soon followed by CryptoMedication screaming foul play on  Telegram.

While the request for retweets by Olta Andoni grabbed the attention of some, it was the project that was associated with the statement that became the eye-catcher of the entire melodrama.

Zerononcesnse announced that it is raising funds, a whopping $1 million, in exchange for a 40 percent equity stake of Golden Signature Operation Inc., incorporated in Delaware (A different approach of raising funds as opposed to the mainstream ICO one in the cryptocurrency space). As a reply to a Telegram member, CryptoMedication said,

“I decided not to collect funds through super vulnerable Ethereum blockchain (and certainly not via smart contract). I use real contracts, not smart contracts.”

According to the Telegram blog, the minimum contribution was set at $1000, however, the initial offerings document shared on the social media mentioned $500, resulting in CryptoMedication accepting $500 from anyone who was confused. He remarked, “Just to assuage any people that are confused, I’ll accept $500.” Additionally, “the first come, first serve” equity offering accepts funds in Bitcoin and Litecoin.

Notably, the well-known crypto-research blog is planning to launch its own cryptocurrency exchange, with Zerononcense bringing in the expertise of prior experience with ABCC exchange. Zerononcense will also be holding an IEO for its utility token, with the firm expecting to raise around $5 million to $10 million. Adding icing to the cake, Zerononcense stated that there was a “partnership with Monero to launch a brand new gambling platform that works in a way that no other platform has ever worked.”

Sadly, the partnership announcement was shot down by Riccardo Spagni, the lead maintainer of Monero and the co-founder of Tari. Spagni – popularly known as FluffyPony on Twitter – said,

When asked about the partnership, CryptoMedication said – “Monero is a decentralized community, so there’s no overarching person that this goes through or a ‘boss’. But he [Diego Salazar aka ‘rehrar’] is someone with authority in that community that helped liaise with people in it in order to help me bring this idea to fruition” – after redirecting to contact Salazar about the “partnership”.

“There is no partnership with Monero. Monero cannot ‘partner’ with anything. A couple of Monero community members have agreed to build an application for this guy (for pay), as contractors.”

“Just like Bitcoin, Monero is a decentralized currency. Nobody would say “Bitcoin partnered with X company” if a couple people who are in the Bitcoin community decided to do contract work for X company. Make sense? So in summary, a couple of anonymous Monero community members have decided to do contract work for this person should this person be willing to pay. That’s the extent of it.”

“They were engaged specifically for the purpose of crafting the risk disclosures and providing some remedial guidance on filing for a Reg506D compliant offering.”

In a series of messages to AMBCrypto, James Edwards explained that the reason for calling off the engagement contract between both the firms was because of “breach of client confidentiality.” The law firm had failed to disclose the information that the attorney Zerononcense was working with was no longer a part of the law firm, with Edwards stating that this was both “an ethical and civil breach of duty on behalf of Ziliak.” 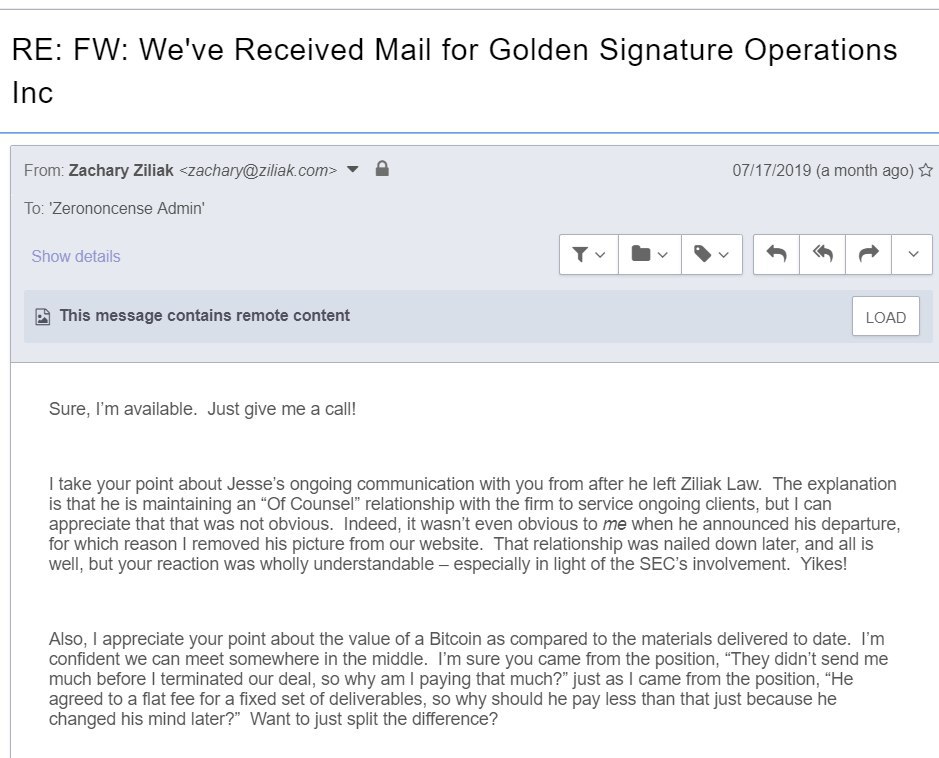 “Olta Andoni had breached attorney-client privilege by continuing to speak about intimate details of the fundraise in the presence of Jesse Hudson despite the fact he was no longer an employee of Ziliak Law.” 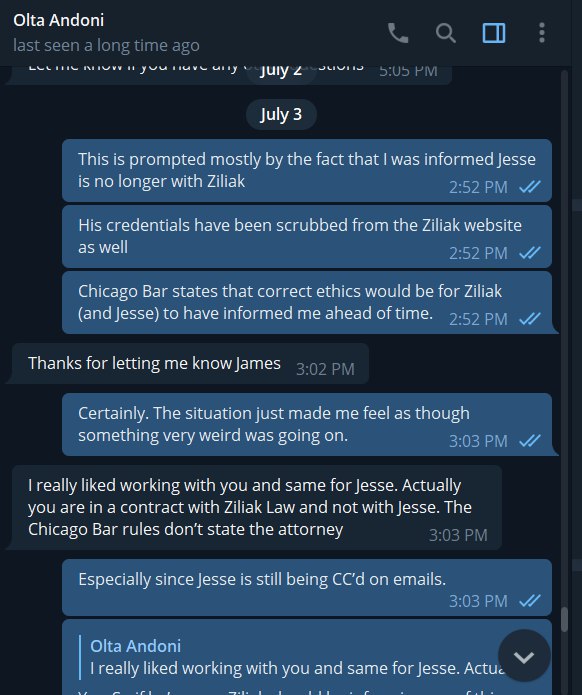 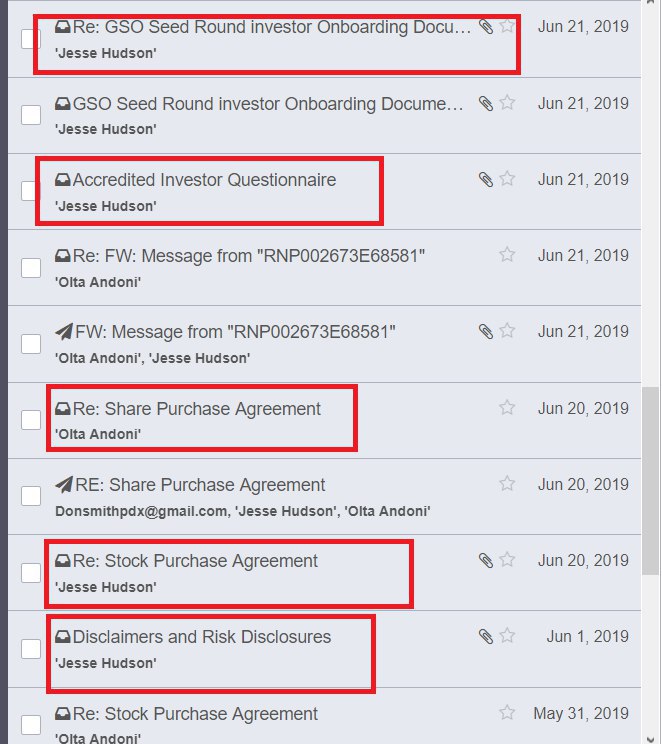 “Olta Andoni actually lied to you all on Twitter yesterday by issuing a statement claiming that Zerononcense was misrepresenting its relationship with Ziliak. It was actually, Olta, that had grossly misrepresented the relationship. And because of this, that served as the final straw with Ziliak and we officially cut ties yesterday.”

Following the fiasco, Zachary Ziliak seems to have reached out to CryptoMedication asking for more clarification on whether the law firm was representing  Zerononcense or not. In an email to James, Ziliak stated,

“[…] For instance, your Telegram posts suggest that we drafted your offering documents, and indeed we composed drafts of some of them, but a final suite of all the necessary docs was not delivered because you dropped us as your counsel before we got that far.”

“If you would like us to comp[l]ete that project or to do anything else for you, please let me know, and we can work out a corresponding engagement letter.”

AMBCrypto has reached out to Zachary Ziliak for comments for the authenticity and the validity of the communication between the two parties involved.

While there is proof that there has been communication between two parties involved and that the firm was signed on, on a retainer basis, Ziliak stopped representing Zerononcense on July 3, 2019.