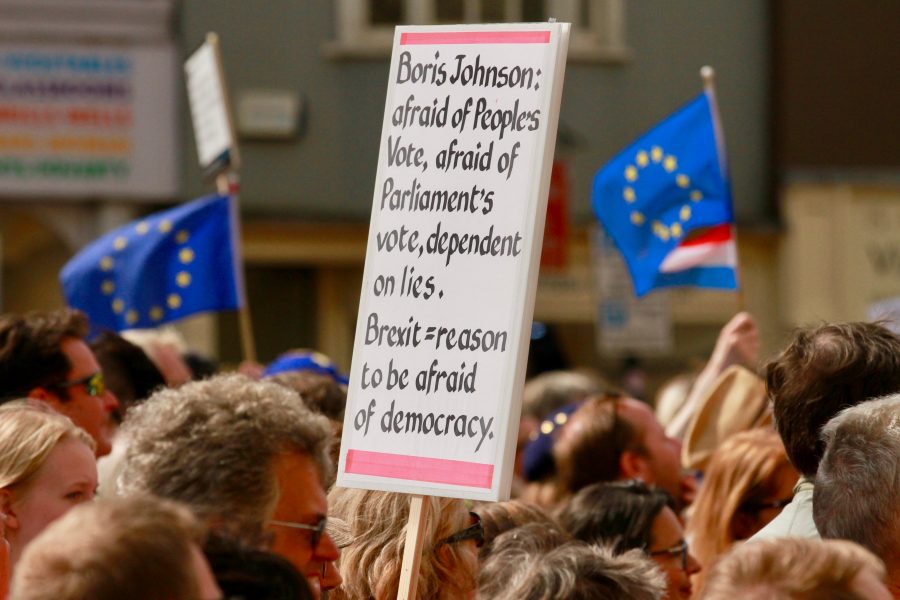 The United Kingdom is poised for the oncoming storm: one that promises to sweep away everything in its way. This storm was in its cumulus stage in 2016, with a majority of voters standing in favor of Brexit after the United Kingdom European Union membership referendum took place and is currently moving toward the maturing stage, with U.K officially exiting from  European Union at the end of October 2019.

This tempest is speculated to take an ugly turn as Prime Minister Boris Johnson is pushing for a divorce with no-deal, and Parliament suspended for a long duration with the Queen’s approval.

The no-deal Brexit could have a negative impact not only on Britain but also the members of European Union. With Germany at the brink of recession, Italy recording no economic growth and smaller countries like Belgium expected to be the most affected, Brexit has become the bearer of bad news.

So much so that United Kingdom has seen a change of Prime Ministers thrice since 2016. David Cameron left office as he firmly stood against Brexit; Theresa May followed suit because of a no-deal Brexit [May had proposed a 21-month transition period; however was downvoted thrice in the parliament] and now Boris Johnson has taken the torch that’s set aflame right-wing ethos across entire Europe.

What a no-deal Brexit would do?

A no-deal Brexit means that U.K would leave European Union without any agreement. This means that United Kingdom would bid adieu to the single market and customs union, introducing tariffs, borderline checks on imports.

Trade would take place in accordance with the laws set by the world trade organization, which would levy tariffs on most goods imported from the EU to the United Kingdom. But, UK has abolished tariffs on most of the goods already [82% of imports would be tariffs free against the current 100%].

The looming threat on the financial markets

Firms based in UK and European Union members can extend their operations to other member countries via Passporting rights. According to Bank of England, Passporting Rights allows any firm authorized in a European Economic Area to carry on activities it’s permitted to in its home state and any other EEA state by either establishing a branch or agents in an EEA country or providing cross-border services. This license is required by all the UK-authorised firms to provide financial advice, establish a base or any other activity in the EEA states and vice versa.

If Britain decided to divorce European Union members without a deal, then these rights would probably cease to exist between the UK and EEA. This, in turn, would have a major impact on the United Kingdom’s financial institutions that are providing services in the EU member countries. Institutions would have to procure a separate regulatory approval required in that particular EU state, allocate funds for relocation, legal counsel and other provisions.

Though Bitcoin is usually hailed as a safe haven in the face of every crisis taking place across the world, the same rules do not apply to companies providing cryptocurrency services. Companies that aim to be regulatory-friendly face an uphill journey.

So far, we’ve seen exchanges such as Shapeshift and LocalBitcoins crumbling under the weight of regulatory norms. However, Brexit wave left even cryptocurrency firms in a cloud of uncertainty. Exchanges such as Coinbase have already started to move; in an email to its customers, Coinbase stated,

“If the United Kingdom leaves the European Union on 31 October 2019 without any withdrawal agreement in place, it is expected that CB payments, Ltd. will no longer be able to provide you with E-Money Services, such as your Euro wallet. 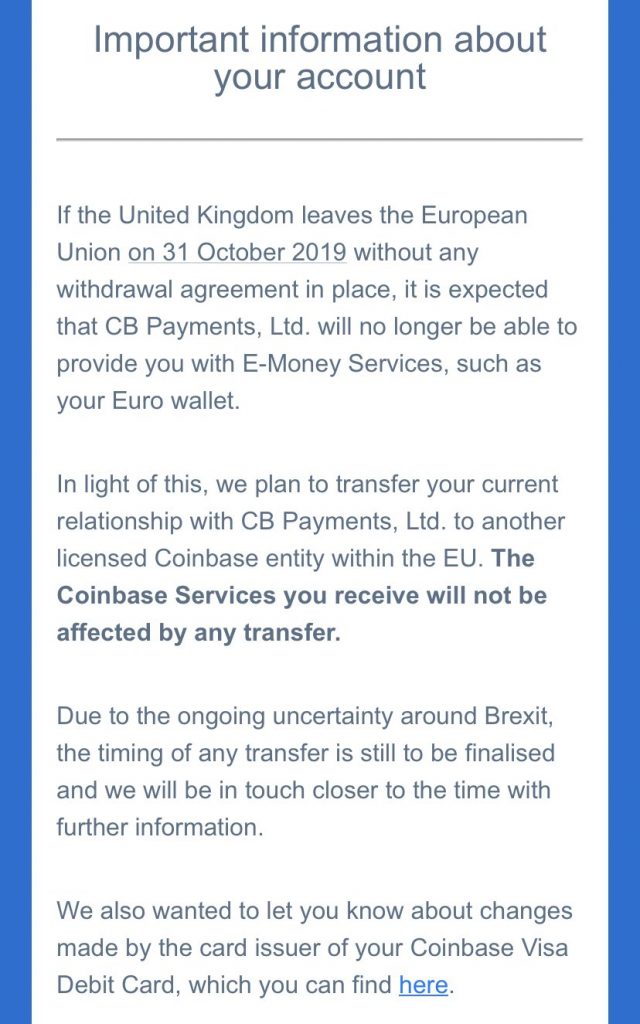 Interestingly, this was not the first move made by the top US cryptocurrency exchange. In October 2018, Coinbase announced that it would be expanding operations with an office based in Dublin, Ireland. In a phone interview with CNBC, CEO of Coinbase UK – Zeeshan Feroz – stated that Brexit did play “some part in the decision.”

“Banking in the UK continues to be an issue and is limited. This is the core of our proposition. Larger exchanges that have banking relationships will have an advantage versus new entrants or smaller exchanges where the relationships are not established or unstable.”

While a no-deal Brexit could have a negative impact on cryptocurrency market, it could, however, be a positive sign for cryptocurrencies like Bitcoin. Several people including Nigel Green believe that cryptocurrency is going to act as a hedge during the Brexit fiasco.

“The oldest exchanges with sound infrastructure are likely to weather any Brexit fallout but in truth Brexit should have positive impact as people look for alternative mediums of exchange and value. UK focused exchanges, like Coinfloor, are likely to do well as their customer base is more focused than others”