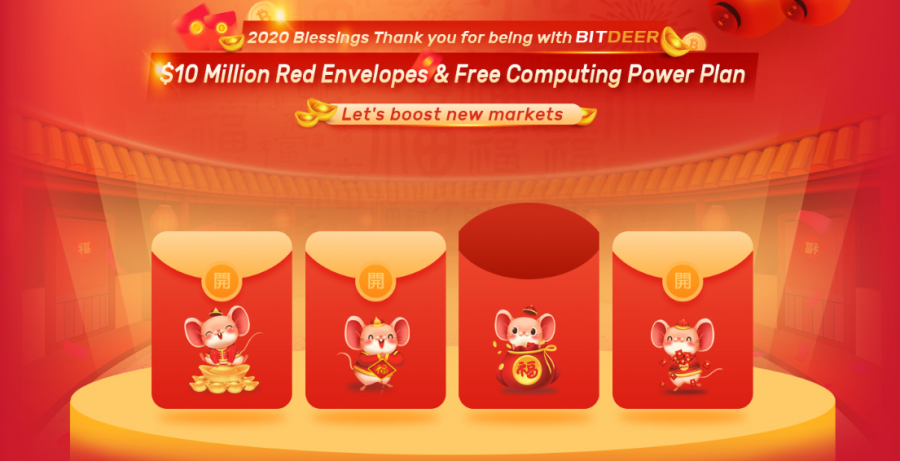 BitDeer’s mining plans were a beacon of light during these times as they were lower risk with high output, allowing users the ability to continue in sub-optimal market conditions of a bearish market and higher mining difficulty.

Putting the interests of its community at the forefront of the company’s vision, the 120-day cycle for the Antminer S17 Pro, engineered to allow users to mine before the halvening event, was further launched on January 4th, 2020. It was scheduled to be sold over the course of 10 days but the supply was sold out mid-way due to high demand.

With the power consumption of the S17 Pro at up to 39.5 J/T, and the package electricity rate accounting for only 37%, the expected volatility in the market was easily cut in half and the difficulty and price were both countered.

Beginning on January 17th and running to February 1st, 2020, BitDeer will be rewarding red envelopes as well as rebates and discounts to its customers.

The BitDeer user base will be given red envelopes to open with a total value of more than $10 million in extension coupons and electricity coupons as the company extends its best wishes for a prosperous new year.

Buy one get one free

During this event, users who purchase any BTC/BCH plan with a duration of 360-days can get a free ETH plan. BitDeer.com will be giving a total of over $1,000,000 in ETH plans for free but will be on a first-come-first-served basis.

Providing more value for its users, BitDeer is giving its customers who pay the 60 D+ electricity fee an opportunity to get 1% off the price. This discount applies both to new and existing plans. These savings will be given automatically and will show up on the order summary page.

Invite friends to get the BTC bonus, with rebates up to 4%

Users who invite friends to enjoy the bonuses when placing an order will get a commission reward of 4% of the computing power fee for the first order. The rebate is double what is normally given to users in light of the coming Lunar New Year, and is another way that BitDeer.com is giving back to its community. The commission will be paid in BTC to a maximum of $500 per order.

BitDeer is the world’s leading computing power sharing platform, enabling global users to mine cryptocurrencies in a transparent, reliable, and convenient way. It saves users from the complicated process of purchasing, installing, and hosting mining machines. Individual miners can enjoy the service with just one click.

Founded by Celine Lu in December 2018, BitDeer currently has millions of customers from 223 countries and regions all over the world and ranks at Top 3 in the cloud mining market share.

Ethereum could rise to $183 before next month