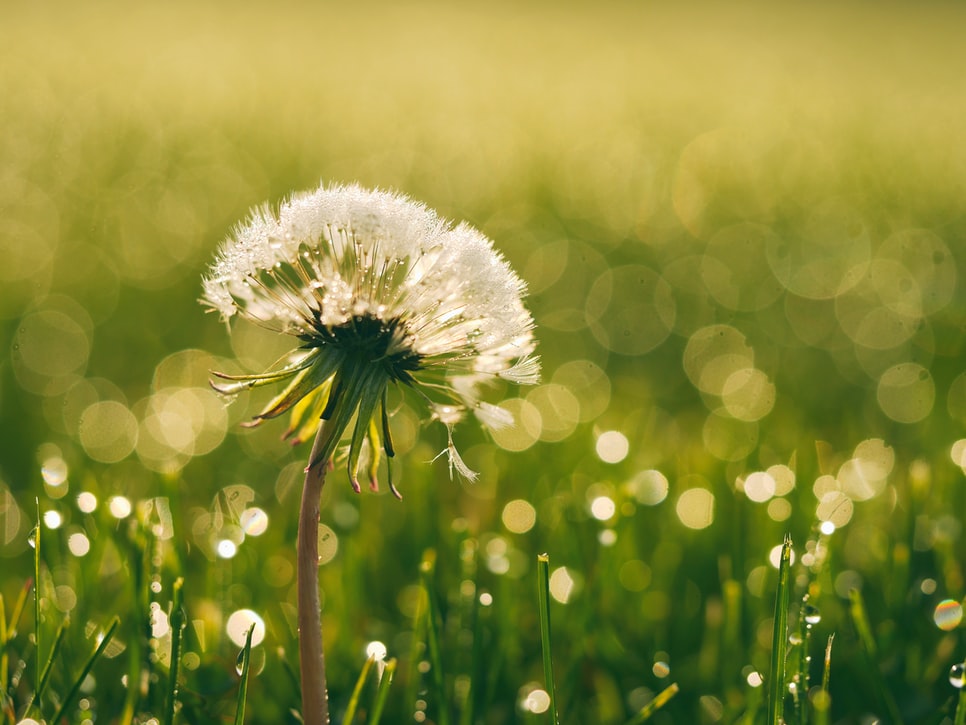 The Chicago Mercantile Exchange (CME) has climbed up the listings to rank in the top 10 derivatives exchanges. The volume and open interest from institutional heavyweights on exchanges like CME solidify Bitcoin’s mainstream acceptance. It fuels anticipation and liquidity on spot and derivatives exchanges for retail traders. The magnitude of the influence is debatable, however, it is an ideal vantage point to examine how BTC derivatives market can push and pull charts.

Aggregated open interest on CME hit $727 M which is a two-fold increase from $250 M in July 2020. This means traders bet $727 M in anticipation of volatility in the near-term price of Bitcoin. 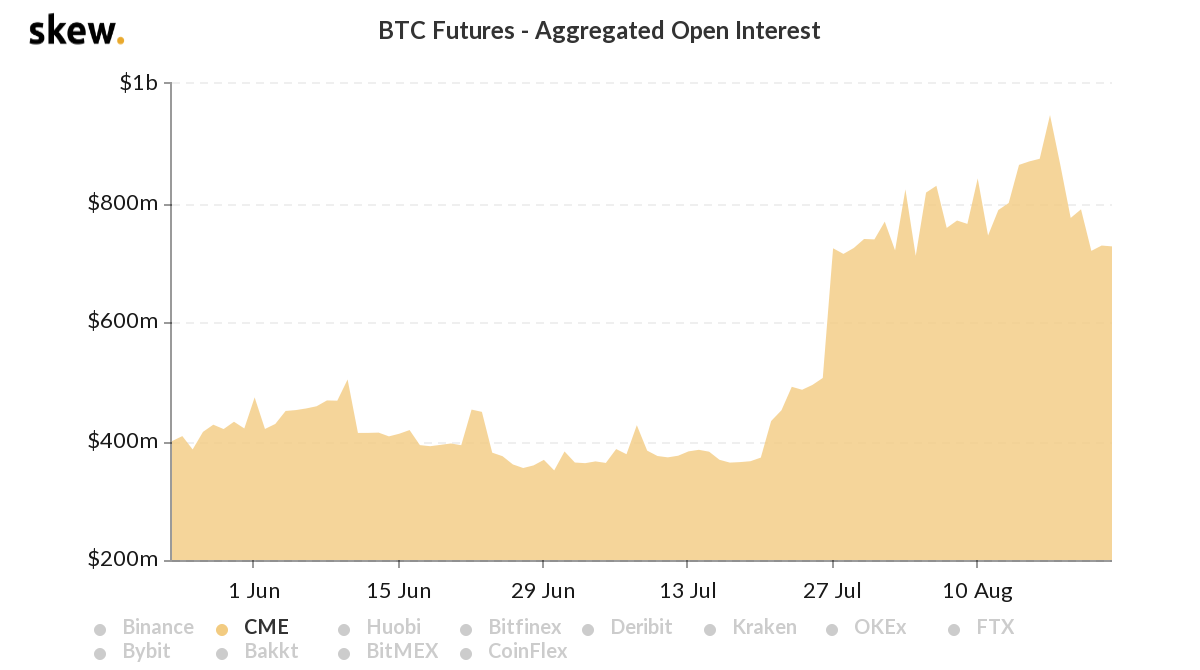 Institutional interest has spiked as investors actively seek alternative investments and thanks to bullish sentiment due to the Bitcoin Accumulation that occurred at lower price levels. David Puell, Head of research at Adaptive Capital, tweeted about clusters of price levels where accumulation occurred: 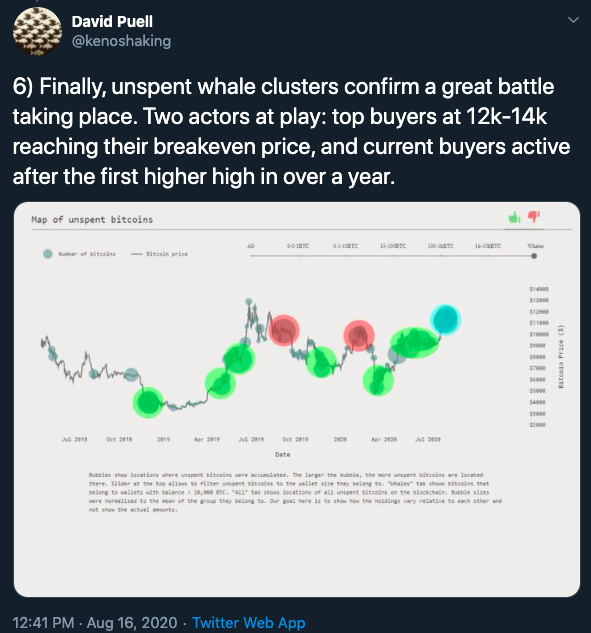 Several key price levels have been highlighted in his tweet and based on the 4-year accumulation cycle of Bitcoin, he revealed that the $14000 level is crucial for Bitcoin. Bitcoin accumulation occurred at $7000 to $9000 level in July 2020. Whale clusters have accumulated in the $10000-$12000 levels as well. Whales who bought their Bitcoin at or above $9000 are taking profits above $11000, and traders that bought the highest are at a breakeven point. Institutional interest can be further explained by Grayscale’s record weekly inflows of $217 M from institutional investors. 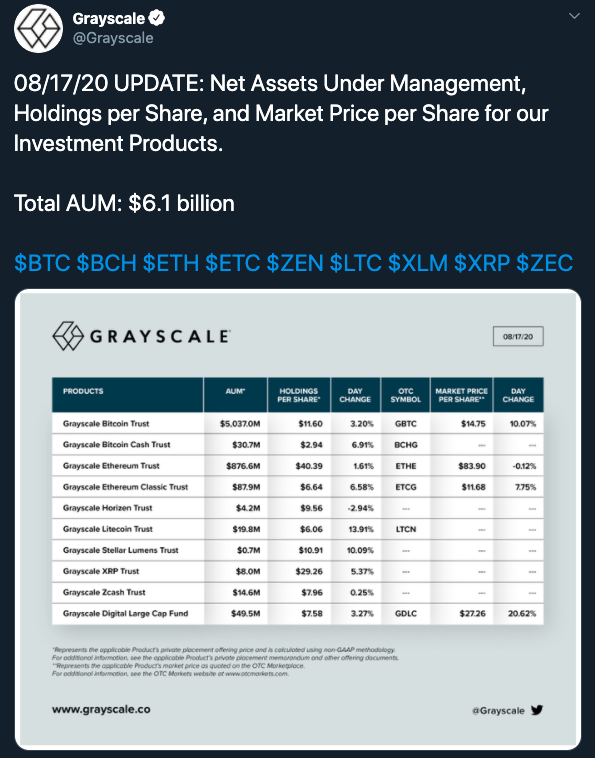 According to their report from August 17, 2020, AUM amount to $5,037M in their Bitcoin trust. Since Grayscale operates various regulated publicly-traded investment vehicles that tailor to accredited and institutional investors, this is a direct indicator of institutional interest and accumulation of Bitcoin.

While it is established that accumulation is at play, low-interest-rate policies by central banks across the world coupled with the rapidly growing money supply could be the major drivers for it.

Post the historic bull run, it seemed like Bitcoin and all crypto financial products were being shelved and institutional investors were in favor of low-risk investments like government bonds, however, the Fed’s recent and consistent rate cuts and actions of central banks around the world have motivated institutions to reassess their portfolios and divert funds to alternate investments.

Here’s how the rate cut worked out for Bitcoin traders- On March 15, 2020, Federal Reserve cut rates to zero in an unscheduled rate cut, and Bitcoin’s price hovering around $5000 USD at the time got a boost to cross the $10000 level. Retail buying took the price above $11000.

There is enough evidence for an uptrend due to increased institutional activity, however, that should not be your only bet. Looking back only a year and a half, markets have witnessed Bitcoin’s volatility and several market cycles where the post halving narrative influenced the price. 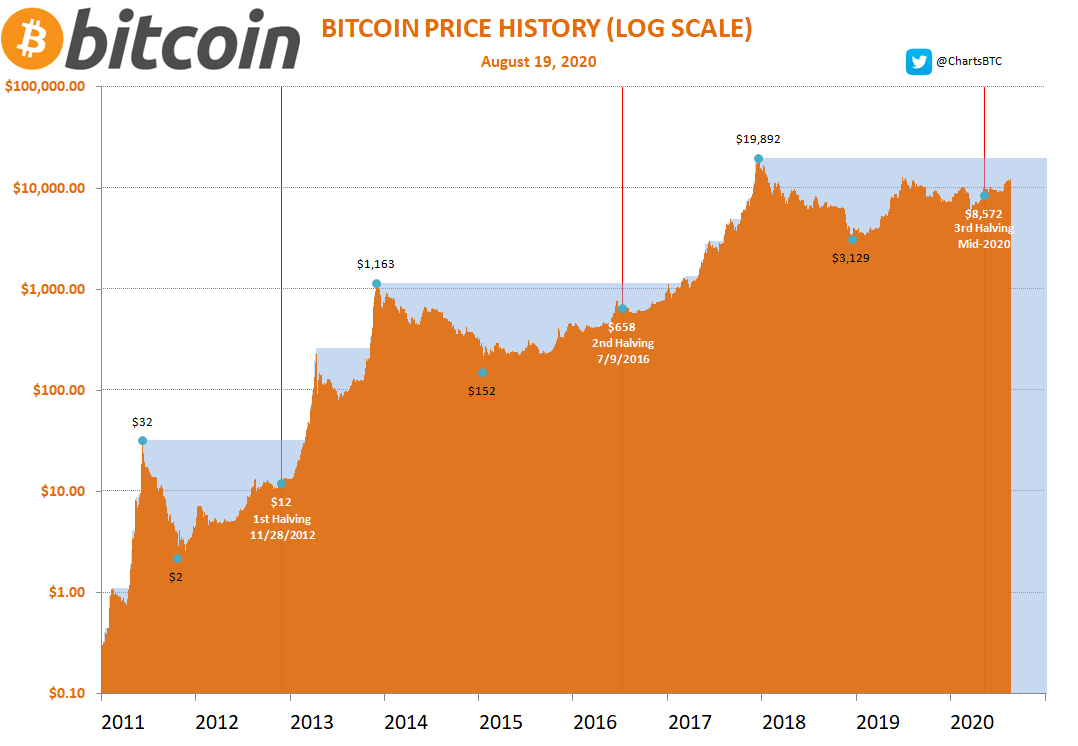 Here’s a representation of Bitcoin market cycles by ChartsBTC. Comparing the third halving to the previous two, it is implied that there may be several drops before the post-halving target is hit.