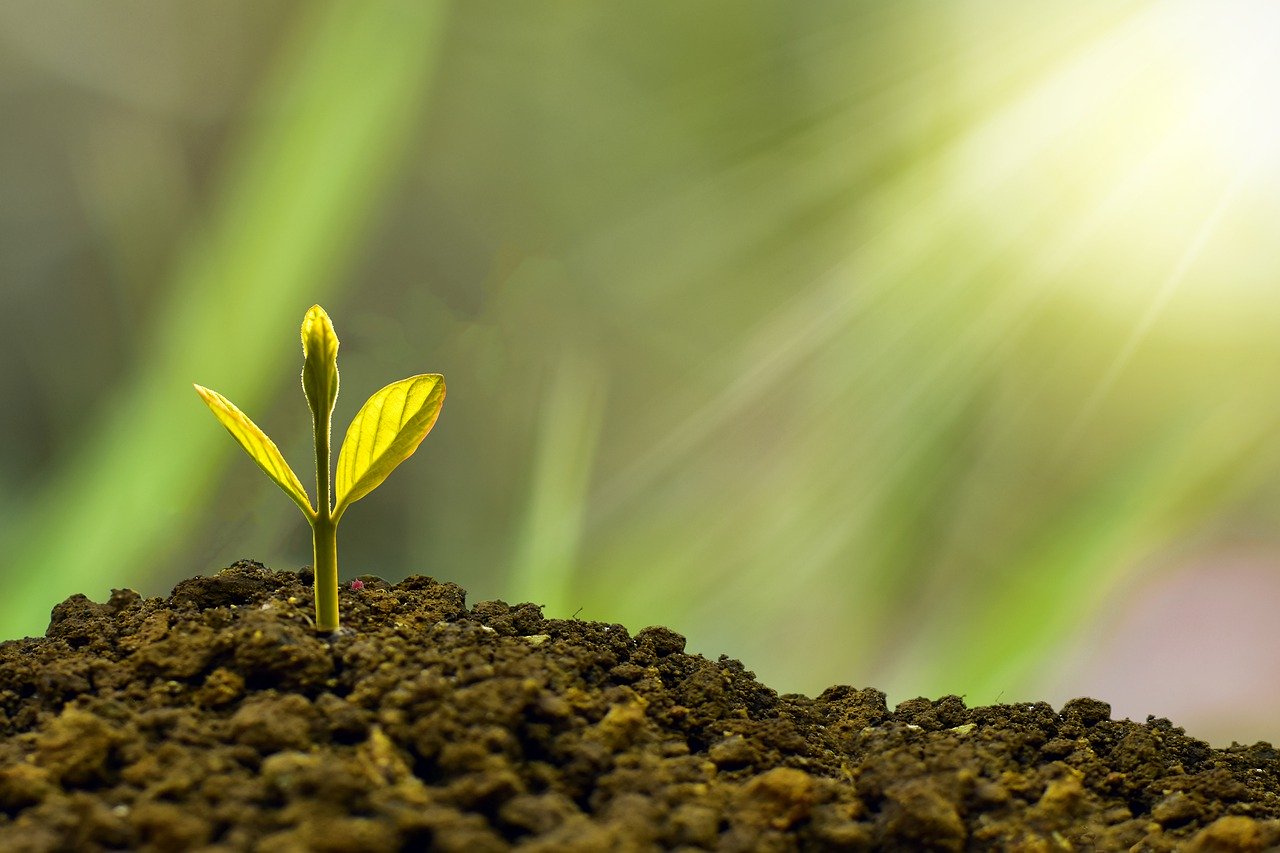 Over the past few weeks, the hype around a supposed altseason seems to have died down. I mean, sure, DeFi is still what one would characterize a “booming space.” But, many of the market’s altcoins have fallen on the charts lately, especially since Bitcoin dipped under $11,000 a few days ago. Thus, the question arises – Is it too soon to say that the altseason has come to a grinding halt?

Of course, it is. After all, it is just a pullback and it’s not like the market’s alts have crashed and burned on the charts. Why then are people quick to suggest that an altseason is at its end? Well, it’s because, in the eyes of the many, the cryptocurrency market is Bitcoin’s market and vice-versa.

Think about it – Whenever Bitcoin falls on the charts and registers a pullback of its own (As was the case recently), do you see many claiming that Bitcoin is done for? No. Instead, what you see is people going on about “healthy” corrections and all. Language such as this just feeds into the notion that Bitcoin is supreme and altcoins can be put on the shelf and out of sight.

Not quite dominant anymore?

However, that might be a notion that’s getting harder and harder to support. In fact, notwithstanding the recent market bloodbath, it would seem that the market’s altcoins have steadily chipped away at the world’s largest cryptocurrency’s dominance and position in the crypto-market. The same was highlighted by two reports recently released by the likes of CoinGecko and Binance.

Look no further than how Bitcoin’s market dominance has fallen on the charts over the past few months. Back in July, the figure was as high as 66%. By the end of August, however, this was down to 61%, with the same dipping to just over 58%, at the time of writing. For an industry with a cumulative market cap of over $315 billion, that is a very sharp fall.

However, what’s more interesting is the fact that the resultant void left by Bitcoin has been rushed into and filled in by some of the crypto-market’s top altcoins – Ethereum, Chainlink, and Polkadot. Ethereum, for instance, was the biggest gainer over the time period highlighted above, with its market dominance climbing to almost 14%. Such a development has been contrary to previous instances where the vacant market share has been filled by a more distributed list of altcoins.

And, it’s not just Ethereum. Cryptos like Chainlink, Polkadot, and Crypto.com Coin have acted as 2020’s disruptors, with their emergence reshuffling the traditional cryptocurrency ladder as we know it. LINK, DOT, and CRO aren’t the first alts to surge incredibly to great fanfare and value, and they won’t be the last either.

However, what these cryptos have done is sustain a position in the top-10, much to the chagrin of established cryptos like BNB, TRX, ADA, and EOS. And that’s not all since like Ethereum, they’ve also bitten into the market share Bitcoin traditionally held.

The same can be deduced from Binance’s August Trading report which found that not only did Binance Futures rise by 79% month-on-month to $195 billion, its highest monthly volume since inception, but the same was driven by the popularity of its Altcoin Futures offerings. 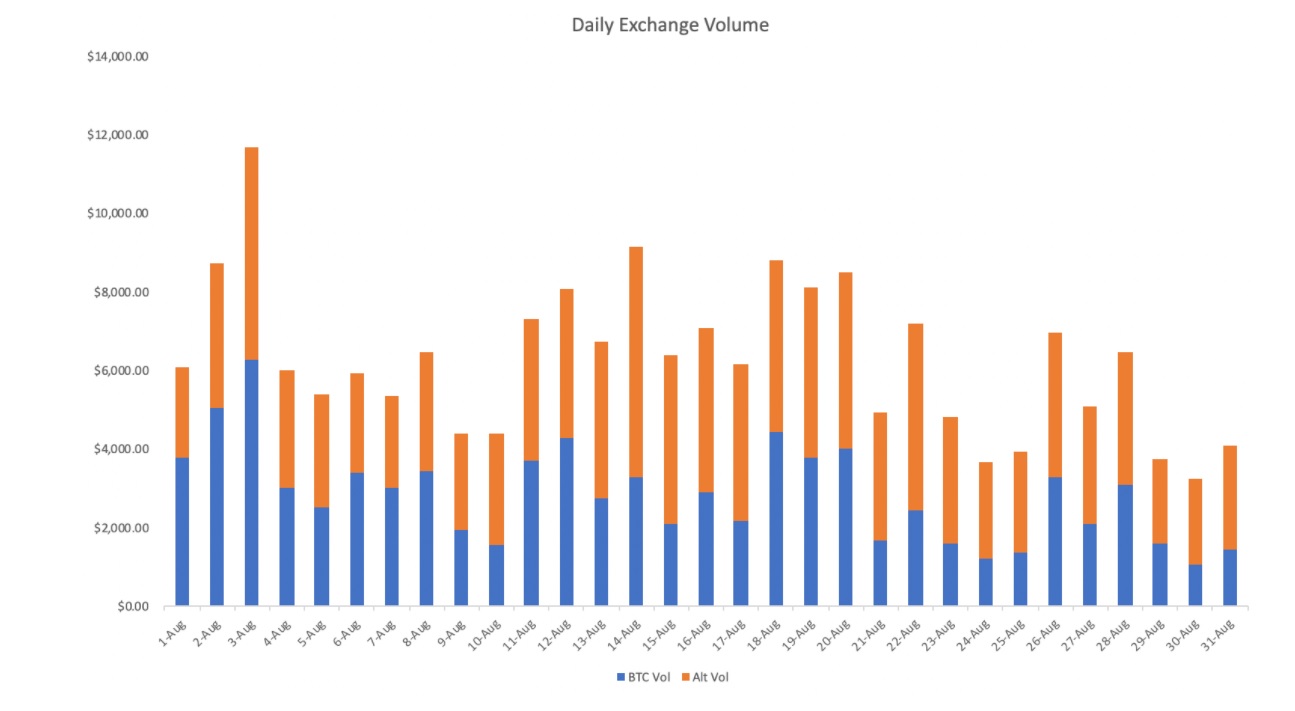 In fact, as the exchange found, while Bitcoin’s market volume dominance fell, the same for altcoins rose from an astonishing 38% to 68% in August alone. What does this imply? Well, it suggests that altcoins continue to be very popular and that users are embracing “Binance’s expanding product range of Futures contracts that provide enhanced diversification and better hedging options.” 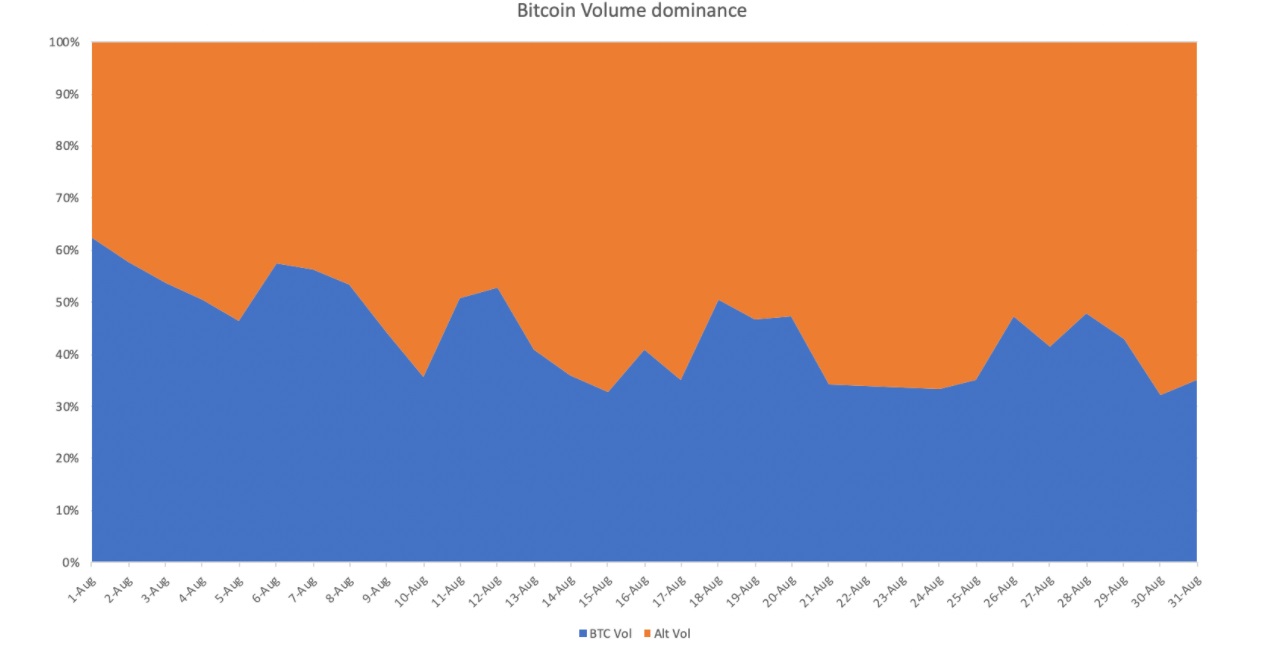 Speaking of dominance, a cursory glance at Bitcoin’s price charts would reveal that the world’s largest cryptocurrency’s market dominance ranged between 35% and 50% during the height of the bull-run between December 2017 and January 2018. A year before that, BTC’s dominance was as high as 95%. Ergo, it can be concluded that the market’s last and only bull run was preceded by the world’s largest cryptocurrency’s market dominance falling sharply.

As has been established, so is the case at the time of writing. This is the reason why many have come to believe that the present market is mirroring 2017’s bull run. However, such an assumption discounts the fact that this isn’t the same market anymore. The crypto-market has evolved over the past few years and it has matured, an observation best backed by the fact that “Do Your Own Research” isn’t just a maxim anymore, it’s a real thing.

Finally, contrary to the case back in 2017, as Arca’s Jeff Dornan wrote in his recent newsletter, more and more tokens with real economic value are coming to the fore now, and these emerging altcoins, these “disruptors,” are simply a few of them.

This, and the fact that the industry is full of third-party research firms like Messari that fuel a system of checks and balances only highlights the differences between September 2020 and December 2017’s market. By extension, this also means that the larger market’s altcoins are here to stay.

What is the bottom for Bitcoin’s crash? When should you buy BTC now?